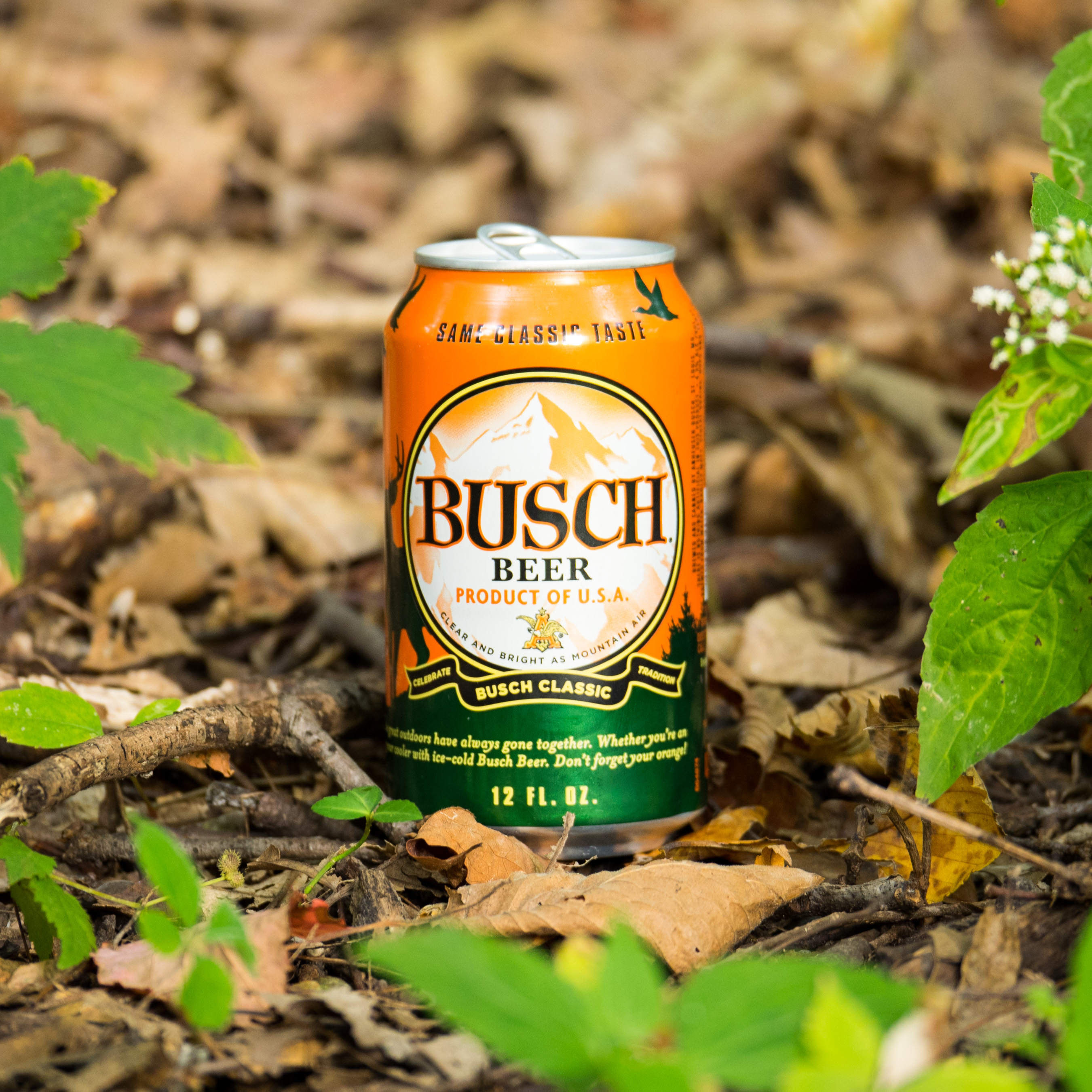 After a day of floating and fishing in the Ozarks, we toss our kayaks on the grass of our riverside campground. Everyone lines up behind a cooler resting on a tailgate. One friend pulls out a Bud Light. Another person extracts a Budweiser. Next, a Miller Lite emerges.

When it’s my turn, I plunge my hand into a slurry of ice. My fingers burn from the cold as I retrieve, at random, an orange can. Sharp alpine mountains rise into sky. A pair of ovals resemble a mounting plaque. Above a snowy forest hangs a banner offering encouraging vocabulary like celebrate, classic, and tradition. At the bottom, a full paragraph relays the beer’s history and includes a Jedi-like mind trick with August A. Busch declaring, from beyond the grave, “I know you will like it.”

Busch, also known as “Booosh,” aka “B-smooth,” aka “Corn Soda,” was introduced in 1955 as Busch Bavarian. In 1980, Anheuser-Busch dropped the European reference from its name, yet retained the image of vaguely German Alps for its logo. As the company frequently mentions, Busch was their first new beer introduced after the 1932 repeal of prohibition. Such a lengthy delay might indicate AB spent 23 years perfecting the recipe, but a few facts from the company’s history suggest an ulterior motive.

In 1953, August Anheuser “Gussie” Busch Jr, brewery president and CEO, purchased the St. Louis Cardinals. For marketing purposes, Gussie sought to rename Sportsman’s Park as Budweiser Stadium. The change was rejected by the MLB Commissioner over reservations about naming a baseball stadium for a brand of beer. In response, Gussie named Busch Stadium after himself. Two years later, in what is probably just a random coincidence, he also bestowed his name upon his brewery’s newest beer.

A typical American adjunct lager, Busch combines corn, rice, and dextrose syrups with malted barley, hops, and extract syrups. It’s mostly sweet and very bubbly, with perhaps a slight over-taste of corn, hints of malt, and the faintest of hops. A 4.3% abv enigma, Busch is surprisingly drinkable with as much taste as the beer’s slogan has meaning: “Clear and bright as mountain air.”

Perhaps this enigmatic persona is what gives Busch the confidence—some might say, arrogance—to rotate its image faster than a college freshman, by directing its marketing campaigns at a variety of demographics. Initially, Busch Bavarian courted baseball fans as the Cardinals’ official sponsor. In 1963, Busch sought nostalgic Germanophiles who didn’t speak the language by releasing the beer in a bottle shaped like a German beer mug. Calling it the Busch Bavarian Beer Stein, this name overlooked the fact that, in German, stein means stone and not mug, for which the proper word is krug. While a German krug can be made from stone ceramics, it is not named for that material.

In the 1980s, Busch shifted tactics with a cowboy-themed ad campaign carrying the motto “Head for the Mountains of Busch.” TV commercials presented hard-working men with rolled up sleeves and ten gallon hats who drove cattle past mountain streams and held impromptu country western sing-alongs. Every ad ended with the same black stallion rearing up on its hind legs. Through some impressive audio over-laying, these ads linked the opening of a beer can with the sound “Booosh.”

In the early 2000s, Busch pursued anglers, hiring as their spokesman the universally-known celebrity, 4-time Bassmaster Classic Champion, Kevin VanDam. A few years ago, a continuation of this theme saw Busch release limited edition cans with images of sport fish such as trout, bass, marlin, and, without a hint of irony, crappie. No one knows how many customers these aquatic promotions hooked, since few among us will readily confess to being pro-fishing fanatics.

In 2009, Busch switched to targeting hunters with a special release of woodland camouflaged cans. While widely beloved, the original leaf and twig coloring was short-lived. Presumably, Busch retired the design due to the many unanticipated “wounded soldiers.” Set casually beside hunters’ feet in the forest duff, countless camouflaged cans were rendered invisible and tragically lost, never to be sipped again.

In recent years, Busch’s fall issue has become safety orange, which encourages tipsy hunters to binge drink responsibly. Meanwhile, a recurring promotion hides rare “golden trophy” cans in select packages. Featuring silhouettes of deer, elk, and ducks framed in a bulls-eye, these hazy images approximate what many a blitzed hunter has seen before firing at a tree. Given Busch’s willingness to try any marketing scheme, it’s a hot mystery what they’ll toss out next.

In our campground in the Ozarks, I join the others at a picnic table. Lifting my can, the sweet elixir of Busch beer crosses my palate. I take another sip, searching unsuccessfully for flavor. I glance inside the can and confirm beer is indeed present, so I toss back a third sip.

← Life Stages: An Essay Based on an Interview with Khalil Abdul-Karim
A Photo for Your Wallet →