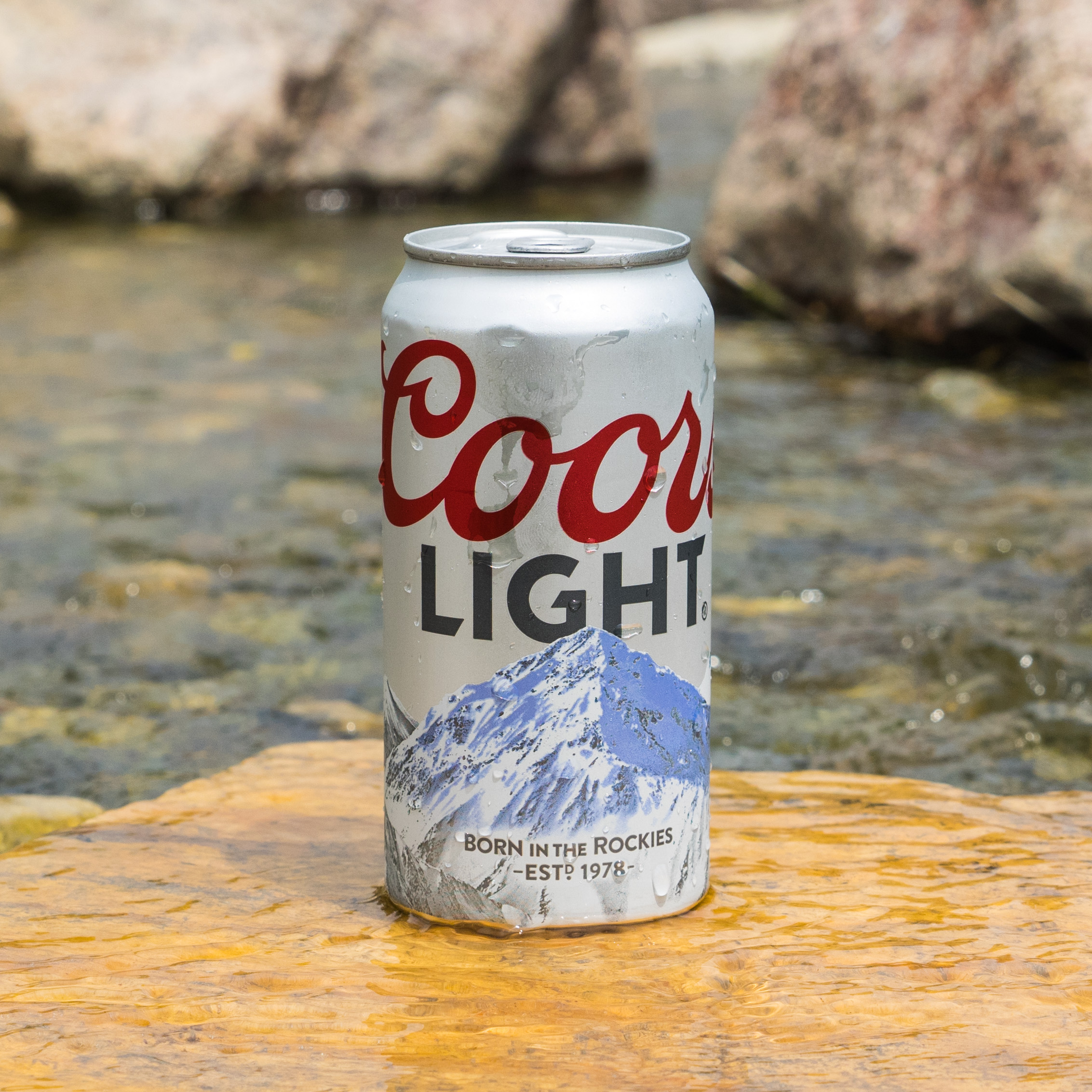 Atop a pallet, I spot a curious interloper: a stack of silver boxes decorated with snowy mountain peaks. One word in red cursive, the other in all caps. I pull a fella in hard hat aside.

“In the Wisconsin Rockies?”

He shrugs and slips between stacks of beer, disappearing along with all remnants of my innocence.

In 1978, the Coors Brewing Company introduced a low-calorie beer in an elongated can, dubbing it the Silver Bullet and becoming “that guy” who coins his own nickname. Despite this faux pas, Coors Light shipments soon surpassed the brewery's 1874 mainstay, Coors Banquet Beer, which was appropriately named by thirsty miners with high dining standards.

During the previous 104 years, original Coors in the “yellow-bellied” cans was a regional beer with a cult following. Sold only in Colorado and ten western states, it was common contraband for wood-panel station-wagon smugglers, including bowl-cut college boys, high-shorts fathers leading family road-trips, and a tipsy Gerald Ford.

In fact, the 1977 film Smokey and the Bandit—which everyone has seen, yet no one remembers what happened—centers on Burt Reynolds smuggling Coors from Texarkana to Atlanta so a wealthy racing fan can party at the Southern Classic.

Capitalizing on their popularity, the company launched itself across America like Burt's Pontiac Trans Am—distributing to their 50th state, Indiana, in 1991. However, Coors' expansion was not fueled by shipments of their beloved century-old recipe, but with a watered-down product and a branding technique known as “market saturation.”

Today, Coors Light is the #2 beer in America. It is favored by stock car enthusiasts who, on race day, are limited to one 24-can cooler per person; by big mountain snowboarders who pocket Coors Lights as liquid courage for tackling the steeps; and by rink-side hockey fans whose icy beverages seemingly careened off the frozen playing surface like hurtling pucks.

Variations along several themes suggest the company has never seen a thesaurus entry it's unwilling to sloganize. Here are just a few:

Who Wants a Cold One

Reach for the Cold

Search for the Coldest

The Most Refreshing Beer in the World

A Perfect Shot of Refreshment

With so many boasts, it's natural that Coors' claims have been questioned over the years. The Federal Trade Commission distinguishes legal puffery, or obvious exaggerations and subjective evaluations that “ordinary consumers do not take seriously” from illegal false advertising, which involves “misrepresentation, omission, or other practice, that misleads…to the consumer's detriment.”

In 1990, as Coors reversed Manifest Destiny and pushed east, St. Louis-based Anheuser-Busch sent a letter to the FTC, accusing Coors of false advertising for claiming its beer was made with only Rocky Mountain spring water. In recent years, AB alleged, Coors had been shipping a concentrated beer slurry to Shenandoah, Virginia, where regular ol' southern tap water was used for dilution. Coors acknowledged this process, but contended the extra water was only a “tiny bit.”

Then, in 2008, the already-hyphenated companies of Molson-Coors and SAB-Miller created a joint venture with a third hyphenated name and further muddled identity, Miller-Coors. For the first time, Coors Light was brewed from scratch—no slurry or mountains—in six Miller facilities across the U.S. Eventually, the ambiguous but technically accurate slogan emerged: Born in the Rockies. According to MillerCoors, this coyly refers to the recipe's 1978 birth in the foothills of Golden, CO.

In the upper Midwest, on the windswept shore of Lake Michigan, I depart the Miller brewery a little wiser and a lot less sure of Coors’ place in the great beer pantheon. Coors Banquet is made with proprietary 2-row Moravian barley, corn, and a four hop blend of Chinook, Hallertau, Herkules, and Taurus. It is crisp, refreshing, and well-balanced between malty sweetness and hints of bitterness. A successful American adjunct lager.

Coors Light is harder to pin down. The first sip resembles getting kicked in the mouth by a carbonated horse. Next, a distant flavor appears, like beer at the end of a damp tunnel. Some describe celery. Seltzer water. Whatever food was last eaten. I get hints of hay. A true taste-shifter, its mercurial identity vanishes before the bubbles. A beer served so cold, it's chillingly flavorless.

One bright spot with a silver lining, literally, is the container. Once described as The Most Refreshing Can in the World, this statement was challenged as false advertising by AB-InBev and withdrawn by Coors. But the Cold Activated label lives on. Sure, the mountain logo doesn't turn from green to white like actual winter mountains, but it does turn from white to blue. Because, apparently, Coors Light is not at its coldest when blanketed by a snowy shawl, but when stained by airliner blue ice along the DEN-LAX corridor.