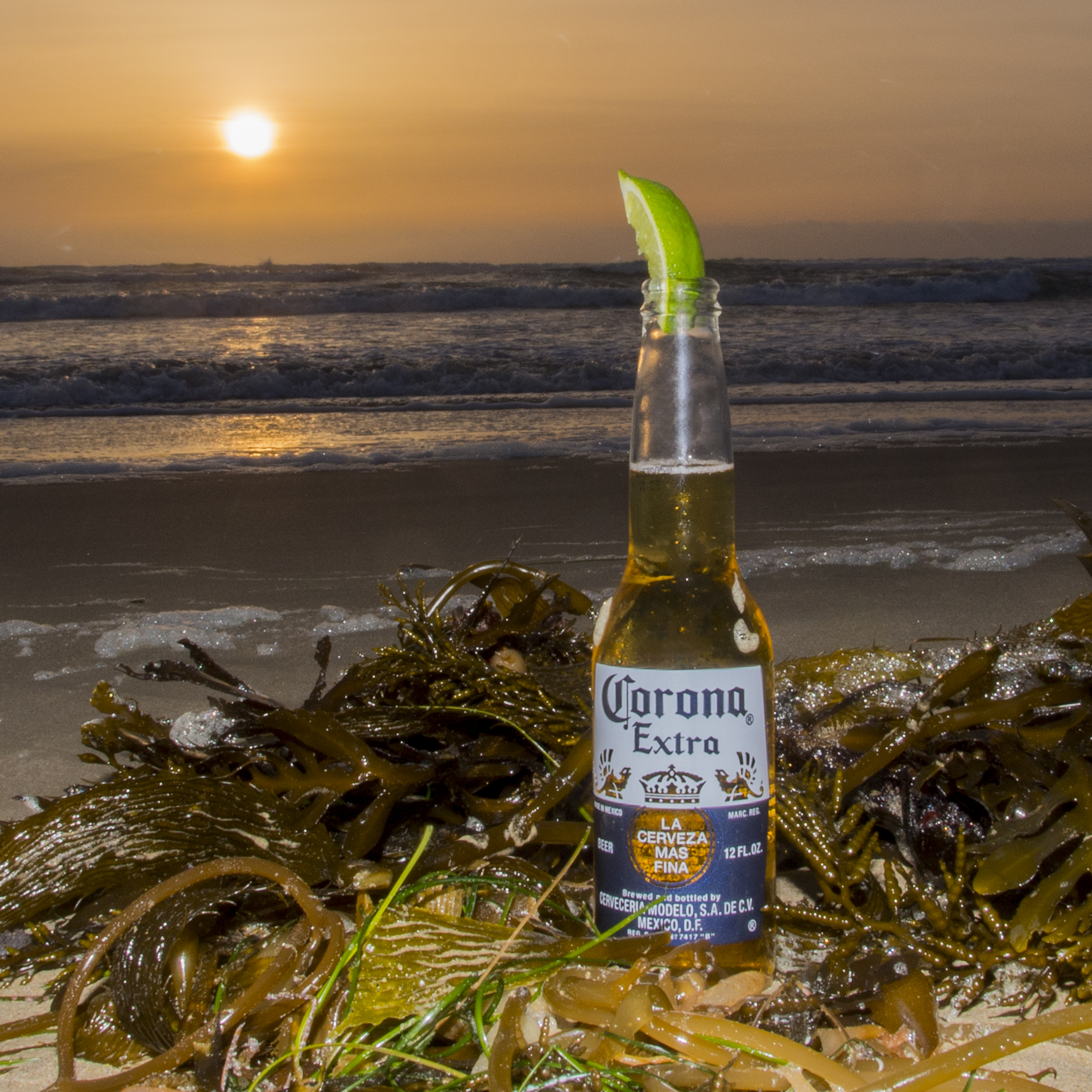 In a rural German town, I sit on patchy sand of a fake beach bar amidst a growing Sunday crowd. College kids home for a visit, young professionals chatting, parents watching children frolic under a fountain. Beyond the tree-lined river rises a timber-framed old town and an onion-shaped church tower.

I inhale a salty smell—not ocean air but bratwurst and pommes frites. And surveying the locals' drinks, I'm surprised by the absence of German Pils. Instead, it's a split between tiny umbrella cocktails and translucent bottles of golden liquid with blue-white labels and bright green limes shoved down their gullets. Sure enough, my wife and her hometown friends return from the bar with a round of now-ubiquitous Corona Extras.

Promoted by ad campaigns such as Find Your Beach or Always Summer, it's no longer surprising to find Corona among the green valleys of interior Germany, or the red-rock plateaus of Utah, the glaciers of Iceland, the rising towers of Dubai, etc.

According to Grupo Modelo, which is a subsidiary of AB-InBev (not a Mariachi super group), Corona was first brewed in 1925 and became the top-selling Mexican brand by 1935. Five years later, the company eliminated the pesky paper labels because they wrapped beers in Mexico's humid climes like wet ponchos. Instead they printed their details directly on the glass bottle, which includes a crown icon and two devoted griffins that look less like eagle-lion hybrids than they do camels with some stegosaurus heritage.

Sporadic imports to the United States began in 1933, but not until '76 did large-scale shipments begin. Corona surpassed Heineken in 1997 to become America's top import beer. In 2013, Grupo Modelo merged with AB-InBev to create the world's largest Belgian-Brazilian-American-Mexican beer cocktail. To satisfy antitrust concerns by the Justice Department, exclusive rights to distribute Corona in the U.S. were sold to Constellation Brands.

Many theorists contemplate Corona's rise. The Harvard Business Review has attributed Corona's surging popularity to aging spring breakers who, later in life, wish to fondly recapture those hazy memories of the wild parties of Mexico. HBR claims taglines such as Cross the Border have allowed Corona to become “the drink of choice among yuppies.”

Accessed prior to their merger with AB-InBev—a simpler time when corporate brewers were more candid on their websites—Grupo Modelo described how Corona's symbolic image is carefully cultivated through rhetorically universalized “ad campaigns that share a similar look and message.” Remarkably, these campaigns are simultaneously “tailored to the tastes of consumers in each market,” by targeting “people who are looking to relax responsibly,” by allowing “strangers [to become] friends,” by letting “conversation flow so easily between friends,” and by encouraging “a philosophy of living in the moment.” To summarize their complex marketing plan, the company emphatically states, “We try not to complicate things.”

Yet, complications do arise among brew connoisseurs who regularly decry Corona as one of the worst tasting mass-market beers available, attributing its universal popularity to a physically appealing veneer. This controversy deepens when examining the one thing that sets it apart—the infamous clear bottle.

John J. Palmer explains in “Chapter 22: Is My Beer Ruined?” of his respected text, How to Brew, that skunky aromas in beer are caused by photochemical reactions of hop compounds from exposure to blue-wavelengths and ultra-violet light. “Brown glass bottles effectively screen out these wavelengths,” he writes, “but green bottles do not.” Palmer doesn't even consider clear bottles, which offer less light filtration than green ones. Thus, skunkiness results when the beers are “left in direct sunlight or stored under fluorescent lights, as in supermarkets.”

Grupo Modelo regularly boasts about creating one of the most recognizable bottles in the world. However, as early as 1926, one year after Corona's introduction, the company “briefly considered the possibility of bottling Corona Extra in a dark bottle, to…preserve its flavor, but rejected the idea almost immediately.” The transparent bottle was the key to their beer's unique success. After all, they wrote, “when you use only the finest ingredients, you've got nothing to hide.”

Of course, that raises the question, if there's nothing to hide, what's the lime for?

In the pretend ocean-front bar near the actual border of Baden-Württemburg and Bavaria, I reluctantly accept my Corona. Like a wet beach towel, I wring every drop of juice from my lime before taking the first gulp. A pale lager with low carbonation, what little flavor Corona has beneath its citrus over-taste seems interrupted mid-sip by a pungent aroma. As if a sunny cruise were cut off by a storm, sending passengers below decks into dank corridors that smelled of stale pool water.

But, admittedly, what Corona never cuts off is fun. From the peaks of Patagonia to the pyramids of Giza, from the Arctic National Wildlife Refuge to the halls of Harvard, Corona Extra is an omnipresent beer with a questionable taste and an extra nice beach body. Apparently, that's worth every gag.