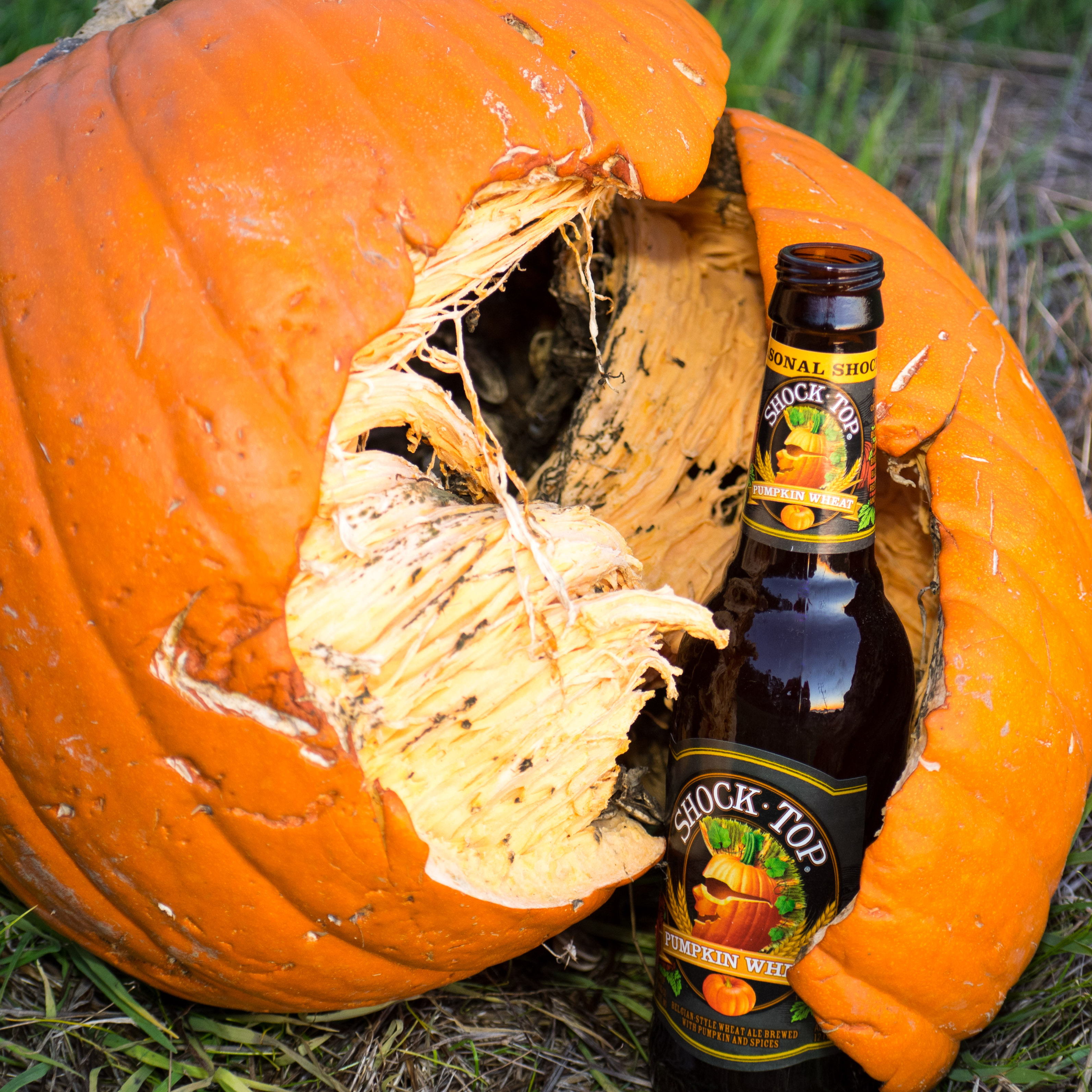 On a blustery evening in St. Louis, I watch leaves tumble outside my kitchen window like the establishing shot of a family film. Opening the fridge, I examine my choices. A string of holiday visitors have left behind an odd variety of gifts:

Finally, near the back, I rest my eyes upon a collection of bottles, each featuring a punk-rock squash on their labels, sitting in my fridge the way estranged cousins hover around the outskirts of a family reunion. These beers were originally abandoned at my house by a friend with a preference for fruity brews. So, I took them to a Friendsgiving event. A week later, the host surreptitiously returned them to my fridge, where they’ve remained since. Feeling complicit in the hard luck of these holiday orphans, I decide to give one a chance.

In 2011, AB-InBev introduced Pumpkin Wheat as the first seasonal offering of the burgeoning Shock Top family, whose patriarch, Belgian White, remains the brand flagship. That year, they also introduced a year-round option called Raspberry Wheat. During the next three years they added a half dozen more varieties. First came Lemon Shandy, then Honey Crisp Apple Wheat. In April 2014, they presented a seasonal with the punny title of Shockolate Wheat, which was not an April fool’s joke. Next came a limited edition beer to celebrate National Pretzel Day titled Twisted Pretzel Wheat. And—hey, why not—Spiced Banana Wheat, which apparently celebrates spicy bananas.

This flurry of flavorful releases suggests Shock Top is on a mission to violate with impunity the “Man Laws” of their biggest beer rival, SAB-Miller. In a 2006 ad campaign, a bunch of well-known males sat at a square table and declared unequivocally, “Don’t fruit the beer.” A mandate SAB-Miller followed faithfully until the year 2007 when they released the lime-infused Miller Chill.

Long before there was Pumpkin Wheat, or even a brand called Shock Top, there was a simple $30+ billion company called Anheuser Busch. In 2006, their Fort Collins brewery slyly introduced Spring Heat Spiced Wheat. That same year, it took gold in the Belgian Wit category of the North American Beer Awards, beating out John’s Generations White from Iowa and Squatter’s Wit Bier from the Utah Brewer’s Cooperative. In 2007, Spring Heat made the top three again, this time taking bronze and bequeathing their top spot to Ram’s Restaurant of Seattle.

Interpreting their victories as a mandate, AB-InBev declared they had “shocked the beer world.” They officially re-christened their newest brand Shock Top and promoted it to compete with Coors’ popular Belgian-style offering, Blue Moon. Since that time, however, no Shock Top beer has rested on the NABA podium, instead losing to perennial champions like two-time gold winners Wasatch White Label and the Nit Wit by BJ’s Restaurant of Chandler, Arizona.

Meanwhile, the beer brains at AB-InBev continue to innovate. But such limitless creativity does come with occasional missteps. In 2014, Shock Top introduced Honey Bourbon Cask Wheat, which some reviewers compared to vomit. While not officially discontinued, references to the beer have been mostly removed from the Shock Top website.

In my kitchen, I examine the label, which lists ingredients for this “Seasonal Shock” to be ripe pumpkins, citrus peel, nutmeg, cinnamon, and cloves. I proceed to detailed pouring instructions, asking me to leave ½ inch of beer in the bottle. Next, I swirl to “properly blend spices” and pour to “release the aroma and flavor.” I watch the cloudy amber-orange brew fizzle from carbonation until the head disappears. Finally, I dutifully take a sip.

A bit blander than other pumpkin ales. Hints of the aforementioned spices, a slightly gritty feel, a generic wheat profile, an aroma of a grocery store pie, and an aftertaste of dirt. Pretty much as expected, it’s like drinking a regular Shock Top out of a fetid Jack-o-lantern.

Perhaps something to try at next year’s Friendsgiving? Not a bad idea, considering I’ll probably still have the remaining five bottles.

← A Photo for Your Wallet
On Charles Bukowski →