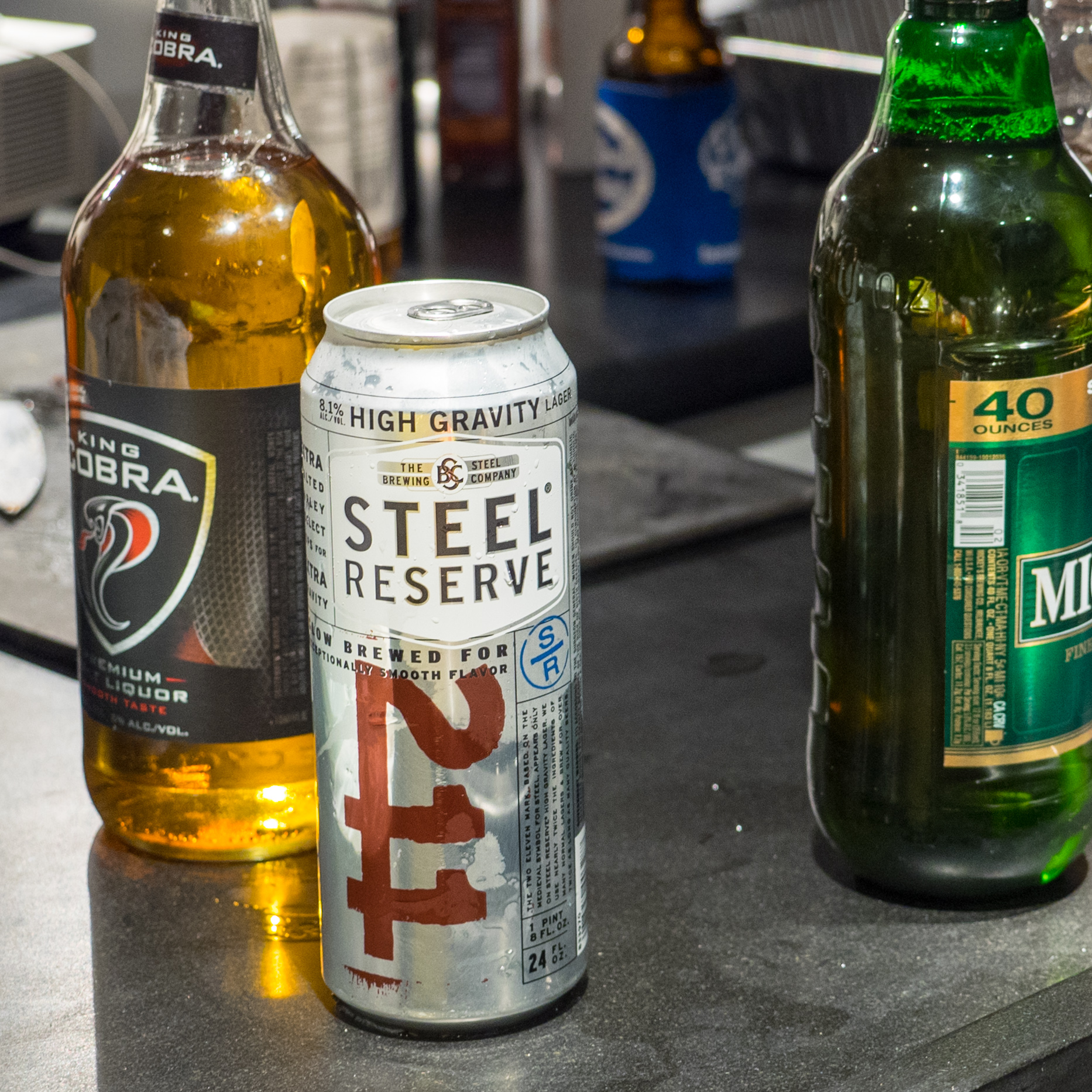 In the kitchen of a rental house on the California coast, I participate in two reunions. The first, a group of high school friends gathered for a winter weekend. The second, a half-hearted suggestion taken too seriously. A blind sampling of our once “favorite” malt liquors.

Lining the black counter, stand 40-ounce bottles of Mickey’s, Olde English, King Cobra, and St. Ides. In the center, rests a silver can of Steel Reserve 211. Its 24-ounce presence sends shudders of teenage nausea throughout the room.

Steel Reserve self-identifies as a high gravity lager, which in a perfect world would refer to falling down a flight of stairs after drinking a few of these. High gravity actually indicates the additional sugars available during fermentation that push Steel Reserve’s ABV to an intoxicating 8.1%. This makes Steel Reserve a budget beverage of high school students with fake IDs, high school drop-outs with paper bags, and high school graduates throwing caution and heart-burn to the wind.

Steel Reserve is brewed in the industrial city of Irwindale, California, which is nestled in the San Gabriel Valley of Los Angeles County. The town of 1400 is comprised mostly of rock quarries and retention ponds, plus a sriracha factory. The silver cans produced in the Steel Brewing facility once claimed, “Slow brewed for a minimum of 28 days.” However, in recent years, the “28 days” stamp was curiously replaced by the letters “S/R,” suggesting even Steel Reserve is dying to get out of Irwindale.

As for the stylized “211” logo, the Steel Brewing Company claims it is the ancient alchemy symbol for steel. But, for the conspiracy theorist, other meanings abound: the country code for the Republic of South Sudan; the American police code for robbery; the 3-digit phone number for the FCC’s Health and Human Services hot line.

Steel Reserve has never shied away from mixed messages. In 1999, the Steel Brewing Company, then owned by the McKenzie River Corporation, released a series of poster ads in parts of New York City, Long Island, New Jersey, and Maryland. These posters featured photographs of rhinoceroses and tortoises fornicating under the tag line, “Research Says Sex Sells Beer.” According to The New York Times, the ads were removed after Harlem councilman Bill Perkins denounced them as “pornographic and disrespectful,” and “a racist joke.”

Throughout the 1990s it was common for malt liquor brewers to market to African-American and minority communities, often enlisting the services of rappers as spokesmen. Ice Cube famously rapped about “a beer that was better than the rest, the S. T. Period. I. D. E. To the S.” And Olde English 800 received frequent mentions in countless rap lyrics plus an entire song dedicated to the beer, entitled “8-ball” by Eazy-E.

Meanwhile, Steel Reserve went with a series of one-minute punk rock songs by the Ramones. Set to characteristically fast paced guitars and drums, one song ambitiously declares, “I want to fill my cup/ I want to drink it up/ And then, I’ll fill it up again.” But the real gem is “Gimme, gimme, gimme my Steel Reserve,” which includes typical drunk promises such as, “after the beach or in a bar/ high gravity lager, you’ll be a star,” or potentially back-firing challenges such as, “It’s the beer we like the best/ Steel Reserve, put it to the test,” which is exactly what we did at our coastal rental.

One friend proctors the blind tasting, placing before us a series of half-full glasses of pale straw liquid. Swirling malt liquor in our cups, we resemble wine tasters locked out in an alley behind a cask room. The first four tastings are uneventful. Some shout “Mickey’s” or “Old E,” confidently, only to change their minds upon second sip to “King Cobra” or “St. Ides.” Finally, we reach the fifth glass, our proctor observing with a coy smirk.

We toss back our gulps and offer a variety of responses. One friend convulses. Another gags. A third spits some back into the glass, only half exaggerating. One guy shouts, “Packing peanuts!” like it’s his catchphrase. My own palette is awash in a sharp pungent taste, like an animal died inside a normal beer, now partly decomposing in my mouth.

As if existing as one hive mind, everyone shouts collectively, “Steel Reserve!”

Our proctor laughingly informs us that this is the only sample we guessed correctly.

That anyone might seriously test Steel Reserve—other than goofy friends during a guy’s weekend—certainly seems a stretch. However, that’s just what the good folks at the World Beer Cup did in 2012. Steel Reserve won the Gold Award for American-Style Premium or Specialty Lager, out of 37 entries, in category 44 out of 90 total. The 211 soundly defeated silver medalist Evans Original and bronze winner, Icehouse. And if that doesn’t make your head spin, you should probably try a Steel Reserve.

← On Charles Bukowski
Pinball and PDA →