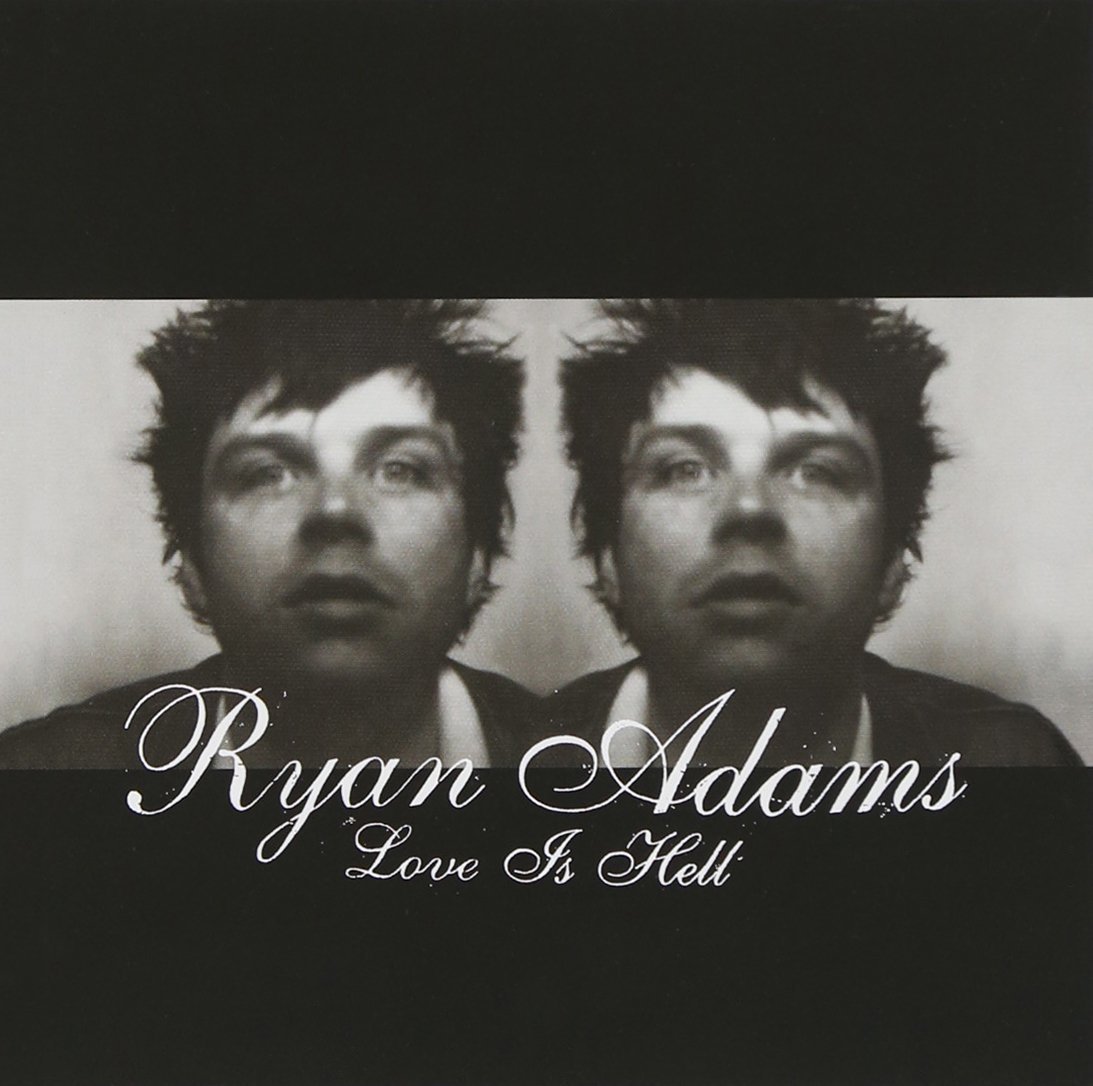 It seems only fitting that the first record I find while crate digging after a wedding would be a double LP audiophile nervous breakdown from Ryan Adams. Forget the fact my future wife and I drove seven hours from central Illinois to Omaha (somewhere in Middle America, according to Adam Duritz, but that’s a bullshit line). Forget the fact that I was recently unemployed and soon to to be loading my life into a storage unit. Forget the fact the newlyweds had rented out the Scott Aquarium for their post-nuptial reception prior to beginning their life in the Atlanta suburbs. Forget the plantation-direct African coffee. Forget the fact we were in the town which  birthed  Bright Eyes and Cursive. It makes sense the most romantic gesture I could compose was a document of fracture and confusion.

The mythology surrounding Love is Hell is convoluted. It’s the fifth album in Adams’ discography, but depending which Pitchfork article you read, this album was supposed to follow 2001’s Gold. There is collector’s circle of hell navigating his catalog between Gold and Cardinal-driven trilogy of releases in 2005. Misunderstood and mismanaged, Lost Highway released Love is Hell as two EP’s in 2004–a strange bookending to the Adam’s LP Rock N Roll. Adam’s obsession with the Strokes and 80’s New York/New Jersey/New Wave was seen as “commercially-viable” and “energetic” to a relatively tone-deaf Americana imprint (to the lumbering Universal Music Group) Lost Highway.  The opposite sources of Rough Trade mope-rock (The Smiths) which inspired Love is Hell were left on the table as something to dissect and reassemble at a later date. The cover of  “Wonderwall” provides the most obvious red flag–as British as Monty Python, Big Ben, and Dame Judi Dench.  A Steven Street style of production–moody, slightly hollow–added atmosphere and miles to the mix. At times, Adams sounds like he’s singing to us from the bottom of an elevator shaft. It’s a universe away from the warm, down home quality of Whiskeytown, where, his analog heart, once lubricated by whiskey and tobacco fields, was violently removed from his rib cage. A full ashtray after last call, Love is Hell comes to us as the ghost of smoke, the dead embers without the smoulder. The knowledge of want from absence.

No wonder Lost Highway was perplexed. This isn’t the Ryan Adams they had signed.

And neither was this the type of wedding ceremony I would ever hope to have. A Heartland rendering of the “November Rain” video–ornate and Catholic and indulgent in a young-religious-love type of way. Conservative with the edges of liberation shining through the stretched gold leaf corners.  We had stopped at a Jimmy John’s before the ceremony and devoured lettuce wrapped lunch meat because we weren’t sure how Whole30/Paleo friendly the reception would be.  We had been dating for just over a year, but this was our first wedding as a couple. The potential for awkward is always high at weddings,especially when the only person you know is your girlfriend and you’re surrounded by a whole sea of strangers you’ll probably never see again.

She was Aubrie’s childhood friend and it’s interesting to think that her closest friends from hole-in-a-wall Blue Mound, IL (population just north of 1,100) would all end up marrying minorities and moving as far as culturally possible (Austin, Atlanta, Transience). They had piped typical wedding reception music into the aquarium for the reception–the type of music which promoted missionary position-sex and heavy drinking at the open bar.  I ended up in an area of the aquarium full of jellyfish. Amorphic undulating blobs of color moving nearly in protest to the soundtrack. Living lava lamps without the languid excess. The newlyweds drifted like the jellyfish from wellwisher to wellwisher, the bride’s gown shimmering in aquatic mood lighting,weightless and immune to the gravity of relentless questions about family, job prospects, and moving south. Her husband, drifting with a bobbing ring of relatives surrounding him, only to break away by linking arm to elbow,a fishhook planted firmly in his new wife. They waved and cried and hugged and drank and were drowned out by smooth jazz and light rock.

Leaning against the faux-exposed corral, I heard two songs which seemed to stand out in their lingering drift through lighted echo–Roxy Music’s “More Than This” and “Wonderwall.”  Ryan Adams’ voice hung like fog threatening to lift and disperse into the rafters. Indignant to the goings on yet in sync with the guests,  “So maybe, you’re going to be the one that saves me…”

No one danced to it. More drinks were poured and still voices hummed in white noise which seemed to muffle the din and create an unmade bed of noise for this song to curl, riptide-like in blankets of chords.

From the corner, Drastic Plastic Records looks like the logical end of the endless highway portrayed on Springsteen’s Nebraska cover,my only true frame of reference regarding the Cornhusker state. I remember when I moved to the Midwest, how so much of the landscape felt like purgatory with its endless expanse of horizon and field. That Springsteen album cover could easily have been shot on I-55 between Chicago and Springfield, IL. The seam of America’s twisted spine accented in stark monochrome. A good record store feels like the rise of skin over a scar–a physical landmark where fractures end and healing began. Damage appears as an echo, just beneath the surface, but something stronger and resilient ultimately remains.

Drastic Plastic splits Omaha fresh with reissued vinyl. It’s amazing to think that beyond just selling albums it’s also reclaiming records for generation next. They have been re-releasing a staggering list of punk/post-punk over the last few years: The Clash, The Birthday Party, Johnny Thunders, Gun Club, and The Cramps, to name a few.  Flipping through records with my girlfriend, it’s amazing to think that a place like this has survived here since 1982, a landmark, upon which the music industry rises, falls, and crashes against. There are leather clad crust punks bobbing against the tide of sunny Omaha skies creeping through the store’s blinds. The punks are anchorless, propelled by the flittering flip of records in racks. The Jesus and Mary Chain Darklands drone a dreamy disconnect–the type of echo chamber drums and wraparound vocals which inspired Ryan Adams “I See Monsters” or “Political Scientist” on Love is Hell.

When I find the hand-numbered Mobile Fidelity vinyl reissue of Love is Hell,  I think about the last time I saw a copy in the wild–Aubrie bought it at Luna Music in Indianapolis. Even though we were about to move in together, there was an unspoken policy about records–our collections remain separated–meaning multiple copies exist between shared interests. We both bought Sleater-Kinney re-issues or Sufjan Stevens. It’s a survival instinct for me–dust jacketed casualties to break-ups, and a countless catalog of Neko Case and R.E.M. which reside today on someone else’s shelf.

So I bought Love is Hell,  but to this day I have never opened it.  I knew it when I bought it.

The last time I saw Ryan Adams live, he played a very lithe rendition of “I See Monsters.” It was Halloween at the Hammerstein Ballroom.  The version wasn’t as much a re-imagining of the song as it was a goodbye of sorts to whatever ashes remained from the ferris wheel in its lyrics seemed to blow away in a din of feedback and stoned ennui.

Leaving Omaha, I already figured out that, in so many ways, this would be the last time I bought a double of a record already owned by my future wife. I slid the deluxe boxed Ryan Adams back into the Drastic Plastic tote bag, dropped it behind me in the backseat. Aubrie was already asleep. We were already moving towards I-80 and a landscape of automobiles swimming against the asphalt tide.

← Pinball and PDA
ROUND TABLE: THE DEATH OF PRINCE →