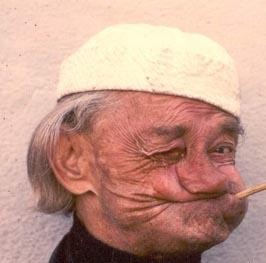 Good-looking people, standing on the prows of yachts with their full heads of thick, wavy hair blowing in oceanic zephyrs, have a better chance staying with their significant others than unattractive people.

Ugly people, sometimes known as Morlocks, toil away in dark factories deep below the earth’s crust. They live hard lives, their pelts covered in dank moss, their words basic, possibly slurred. Their hopes are simple, their dreams simpler. Most can find joy in a shiny pebble or a poem about geese.

“I married my wife for her personality and her ability to find food in a lightless environment,” said an ugly man who was found trembling in a dark stairwell in Sioux City, Iowa.

The study also found that people who deemed themselves less than attractive usually switched what was important to them in a mate. They would often cite sense of humor or kindness as reasons to marry someone. Oh, those poor fools.

This study finds that sense of humor, human decency, heroism, magnanimity and love all pale in comparison to “hotness.” People who find each other attractive are more likely to stick together. That’s it. Attractiveness is a randomly attributed virtue distributed to the virtuous and wicked alike, and it was predestined at birth. TOO BAD!

In the future they may be able to improve marriages by meddling with DNA and eliminating ugliness forever. Until that day comes, however, I’ll have to keep putting loads and loads of product in my hair, continue speaking in a false, vaguely European accent and save up for cosmetic surgery. I plan to have my beady eyes unbeaded and my uni-brow split.