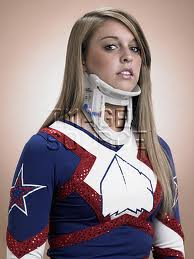 The American Academy of Pediatrics is working to get cheerleading designated as an official sport due to the sports-like injuries cheerleaders face. Although fewer girls are injured during the leading of cheers than in soccer games or gymnastics meets, cheerleaders are at higher risk of catastrophic injuries, like broken spines or death.

“Basically,” said one pediatrician. “When a cheerleader falls off the top of the human pyramid and hits her head on the unforgiving gymnasium floor, we want her to know it was in the name of sports. I mean, can you imagine looking a head-injured cheerleader in her one working eye and telling her that she suffered permanent brain damage during an extracurricular activity? It would make her sacrifice and the rest of her life, which will be no doubt filled with confusion and pain, almost meaningless, but if her fine motor skills were lost in the name of sports, then she’d be a heroic martyr, like Joan of Arc.”

Currently, twenty-nine states recognize cheerleading as an official high-school sport.  It is unrecognized as a college sport everywhere. Cheerleading isn’t the only college activity that doctors would like to make a sport for the sake of raising the morale of its injured participants. Hackey-sack, beer pong and whatever those nerdy guys are doing with those duct-taped sticks that look kind of like swords are all still pointless ways of being catastrophically injured.