The Language of Depression 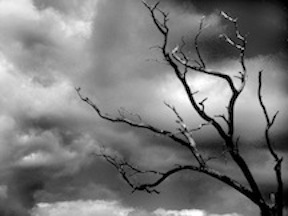 There is no quicker way to spiral downward as a depressive than to start thinking about all the things you want out of life, all the things you expect and desire for yourself. In Reasons to Stay Alive, Matt Haig warns against getting lost in thinking about where you are in relation to where you want to be. My wife echoes this sentiment often when she tells me to live in the “now.”

I find it impossible to heed this advice, just as my own standards of who I should be and where my life should take me are impossible. Of course it is unhealthy, but there are parts of my brain I’ll never have full control over. This is life with bipolar disorder.

I’m open, maybe even too open, about my mental health, but I am also closed off, quiet, and removed. It’s a paradox that shadows the war my brain wages against itself. I believe there is value in sharing my experience, that good can come of the honesty. But it also frightens me. I want to write more about my struggles than I do, but I don’t want to scare or worry people who care about me.

Words are important to me, perhaps more as someone in a constant struggle with mental illness than as a writer. “Now” means “this place where I am currently feeling like crap.” When I say “death” equates to “relief” I am not saying that I will drive my car off a cliff tomorrow. I am saying I am in pain and that it makes me want to stop the ache. Because I think about dying doesn’t mean I am going to kill myself.

“Sad” is a word that has lost it’s meaning. It is a depressive “cute.” Its connotations have morphed into a childish descriptor. But how do I say that I am tired of feeling this way all the time, because the meaning of “depressed” has changed as well. It is a catch-all, a fishing net ten times the size of the boat. “When I was first aware that I had been laid low by the disease,” William Styron writes in Darkness Visible, “I felt a need, among other things, to register a strong protest against the word ‘depression.’”

I don’t have the words to both illustrate how I feel and assuage the concerns of those around me. Maybe those words don’t exist.

“To love another you must first love yourself” is a popular idiom, but it is also a worthless platitude. I have an ego, but I do not love myself. I consider myself an eternal failure. Yet the love I feel for my wife and children transcends any other sensation and the fact that they love me is one of the few things that keeps me getting out of bed every morning. The love I have for friends keeps me human, when I feel otherwise. Loving others is much more important to me than loving myself.

Haig takes to task another platitude when he says “What doesn’t kill you can leave you limping for the rest of your days.” The phrase “What doesn’t kill you only makes you stronger” sounds nice in a half-time speech from a football coach kind of way. But think about it for a moment and you’ll realize how ridiculous a statement it is.

In my early twenties bipolar disorder helped me derail my life. An alcohol problem that would have turned Keith Richards’ head and a suicide attempt got me kicked out of college. That didn’t make me stronger, it made me flounder. I got a job pumping gas and lived on the couches of family members.

I didn’t fight to be readmitted to school because I had gained some sort of strength and understanding from the experience. I did it because I was afraid. It took much longer for me to get my drinking under control and heal emotionally from my attempt to kill myself. I don’t feel that either gave me strength, they’ve simply become a part of my past like countless other experiences that pile up and create a person.

“Ambition” is a word that garners both respect and derision. Someone without ambition is worthless or lazy, but someone with too much ambition is arrogant and egotistical. Ambition is often described as “healthy,” but it is also commonly referred to as “dangerous.”

I have always had a lot of ambition. From a young age I wanted to be famous. I wanted to play baseball professionally and be an actor. As I got older those goals morphed into wanting to be a writer, a filmmaker, and, less grandiosely, a professor. Writing alongside day jobs seems to be what I have left.

I don’t think being famous would make me happy. I’m not naive enough to think it could “cure” my depression. Bipolar disorder has no cure. I have accepted that and moved on to the challenge of living alongside the illness. The closest I can come to explaining my desire for fame is for the attention. Not a “Look at me, aren’t I great” sort of attention, but a “Does anyone know I’m here?” kind.

There may be no trait more common to depression than the thought that nothing matters. If nothing matters, what is the point of doing anything at all, the depressed brain will say. Indeed, in the last three years I have written increasingly less because of this thought, despite knowing it is a chemical imbalance shouting it.

Haig tackles the difference between “despite” and “because,” rightly stating that more often than not mentally ill people who accomplish great things (or anything at all, really) are not accomplishing them despite their struggle, but because of it. But there is a more important word: “endurance.” I don’t go to work every day despite or because of being bipolar, I do it because there aren’t other options. This goes for nearly everything in my life. There are many times where I would like to lay in bed all day, but I don’t have the luxury to make that “choice”. There is no choice when it comes to how I feel, only in how I carry on.

The most powerful and honest part of Reasons to Stay Alive concerns the word “happy.”

“If you have ever believed a depressive wants to be happy, you are wrong. They could not care less about the luxury of happiness. They just want to feel an absence of pain.”

When you are depressed people talk a lot about happiness. They ask what will make you happy or what has made you happy in the past. This creates a polarization between depression and happiness, leaping over any middle ground. I don’t need to be happy to be “okay.” People acting out of care and concern don’t like that word. They say, “just okay?” But okay is a hell of a lot when you are in the throes of a deep depression. Okay feels like a day at the beach.

Depression makes a person feel like they are doing something wrong because they aren’t happy. It doesn’t sound as cheery to ask someone if there’s something you can do to help them feel okay, but there is less guilt involved for the depressed party. I came to terms a long time ago with not needing to be happy. If I am going to ever come close to living in the now, part of that will have to be not thinking about the concept of happiness.

This goes for “loneliness” as well. Loneliness is not a synonym for “alone.” Alone is a numbers game. Loneliness doesn’t have a maximum occupancy. I can feel lonely when I’m by myself, or when my younger son is cuddling me on the couch, or when I am socializing with a larger group. Next to failure my biggest fear in life is that the loneliness will never abate. “Failure of alleviation is one of the most distressing factors of the disorder,” Styron wrote. The longer you live with mental illness the more its ceaselessness becomes a reality that must be accepted and worked around.

When you suffer from depression or live with mental illness and you approach others who have suffered the same afflictions, whether in person or in books or films, there are moments of looking into a mirror. The most uncomfortable I have ever been while watching a movie was Silver Linings Playbook. I seemed to be watching a reproduction of my own-self destruction.

Often you see or hear descriptions you hadn’t previously been able to articulate. How does one describe a completely interior experience that seizes control of your brain? I liken it to watching a storm roll in across the horizon. You can feel the cloud moving across your brain, and you can only batten down the hatches and hold tight.

Inevitably everybody’s experiences differ, which can cause paranoia (is there something even more wrong with me than I thought?), confusion (but my experience with that was so different), or even anger (if only I had that luxury!).

Haig echoes the sentiments of many, that knowing others suffer from depression, that they are not alone in their struggle, helps them cope, gives them a little something to hang onto. I wish I could say the same. I’ve never found this comforting. Sharing any experience with someone else doesn’t feel like a boon or a curse. In fact, I’d rather no one else ever be depressed. The idea that so many people in the world suffer from mental illness makes the pain a little worse. There is “strength” in numbers, but there is also “despair” in the reality of scores of people suffering in the world.

What books like Reasons to Stay Alive and Darkness Visible illuminate is the value placed on words when the mentally ill talk about their struggles. Words can’t be thrown about, they have to be carefully chosen.

When a psychotherapist told me I was “severely” bipolar, I laughed, a reflex for the emotionally deficient. But it was a violation of her position and my humanity. I don’t need things to be sugarcoated, but careless language is dangerous language. Writers may live on words, but people live with them. This is why I often give up on writing about my experiences. I won’t throw caution to the wind when it comes to what I choose to say about depression. There is far more at stake than in writing a story or telling a joke that falls flat. I will measure my words with care, not for fear of hurting others, but out of the desire to connect.

Ryan W. Bradley has pumped gas, painted houses, swept the floor of a mechanic's shop, worked on a construction crew in the Arctic Circle, fronted a punk band, and more. He now works in marketing. He is the author of eight books, including Nothing but the Dead and Dying. He lives in Oregon with his wife and two sons.