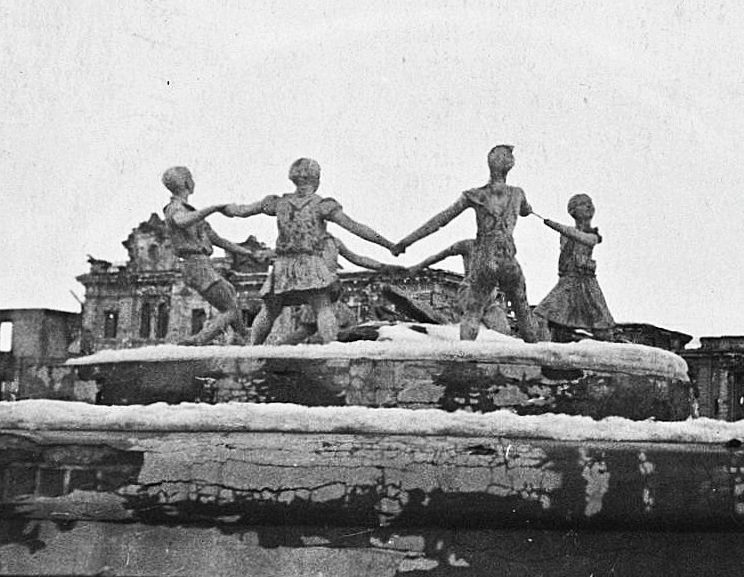 One day, Taras will see Barmaley Fountain, that statue of laughing children at play circling a crocodile, fires raging in the charred ruins of his beloved Stalingrad. But for now, he is like one of those stone children, screaming “You are it!” in the chill morning, stealing minutes on the frosty streets before he must head to school for hard lessons in the history of the People, the tale of the tyranny of Western capitalism, the emancipation of the dark peoples of the world from the slavery of capitalist whites, the exploitation of native peoples by colonialists, the relentless, greedy absorption of natural resources by the moneyed elites. His teacher, Mr. Susnin, sketches one vivid scene of violence after another so that this classroom of boys stays rapt despite the overheated room and the click of hard shoes in the hallway heading to lunch. These romantically horrific images stay with Taras throughout the afternoon until art class where they manifest themselves in paintings in yellow, black, and blue. As the afternoon races toward dusk, he hurls his body through the world like a projectile, engaging in wars of rocks and bottles with neighbor friends and seldom is he the one heading home with a bloody lip or skull. Although the world is dangerous, he sees its possibilities.

Years later, during the months-long siege that will be called The Battle of Leningrad by future historians, Taras will narrowly miss being crushed by falling walls when a bomb hits the corner of a building just so, shattering its quoin, one wall falling north, the other west, he, luckily, standing just in the center of this crashing brick. This close call—not the first, but somehow, perhaps due to the prospect of being crushed like a bug, the most chilling—is what makes Taras finally desert, using family connections to slip onto a shipping vessel down the Volga to the Caspian Sea and then into Iran, continually moving west so that one day, a year later, he will see the Cayambe volcano in a little village in Ecuador. In the employ of a distant cousin, he will engage in charting the cartographies of unspoiled and unexplored places, a concept generally baffling after a life in Communist Russia with its factories and buildings, its concrete, and then the shattering of so much of that concrete by bombs and bullets. Born in 1925, he is just barely a man, and yet, feels that he has already seen so much.

On the second night in this valley, the natives at the base of the volcano will bind the cartographers and lead them into a clearing next to a raging fire. At midnight under a full moon, Taras will undergo an elaborate operation involving delicate stone blades and fire and, amidst the chanting voices of an ancient language, he will have an epiphany of sorts. In his mind, he goes to a place where he holds the hands of his school chums as they laugh and run in a circle, a snapping crocodile at the center of their daisy chain of limbs. His cousin, Elizabeth, just misses losing her black shoe in the snapping jaws and the children laugh. Taras will rush greedily to that moment in time and space although the things being done to his physical form try to pull him back to this South American amphitheater. Like a soundtrack, the voice of his elementary school teacher, Mr. Susnin, instructs him in the evils of America.

John Talbird is the author of the chapbook, A Modicum of Mankind (Norte Maar). His novel The World Out There will be released in 2020 by Madville Publishing, and his fiction and essays have appeared or are forthcoming in Apalachee Review, Ploughshares, Grain, Juked, Potomac Review and North Dakota Quarterly among many others. He is a frequent contributor to Film International, on the editorial board of Green Hills Literary Lantern, and Associate Editor, Fiction, for the noir online journal Retreats from Oblivion. A professor at Queensborough Community College-CUNY, he lives with his wife in New York City.

← Will You Completely, Eagerly, Hungrily Devour me
Letters from a Dead Planet →