Brian Bosworth and His Closet Full of Bodies 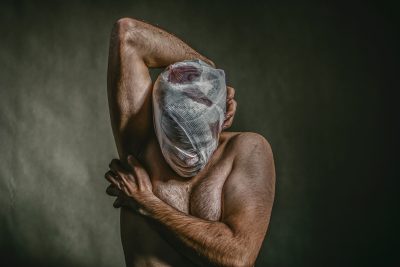 Brian Bosworth has a closet full of bodies. In the morning, he opens the closet and puts one on. He slips it over his skeleton and looks in the mirror. Inspects his image and proportions. It gets his motor running—makes something vibrate in his ribcage. He likes ones with narrow hips and jutting shoulder blades. He doesn’t like thin hair and long toes. But he’s not too picky. That’s what he’d tell people, if they ever asked.

Each body takes some getting used to. He’ll trip over the large feet or miss his mouth when he’s eating his morning oatmeal. He used to pee in jars when he got new genitalia, though that thrill has worn off over time. Some bodies are jumpier than others, with nerves like riding an electric bronco. Others have anchor legs with squeaky joints; they move slow as a hot old dog and have asses made for sitting. You have to feel them out, Brian would tell people, if anyone ever asked. You have to ride them and feel their rhythms and their tweaks and hisses. Each one has its kinks.

He likes to drive around Los Angeles in his red convertible. He puts the top down and drinks up the rays. It gives the body a UV glow. He waves at strangers with his new hands and takes the vocal cords out for a test run, cranking up the car stereo to belt out death metal screeches or hit the highest of Mariah Carey’s octaves. He marvels at his knuckles as they grip the wheel, how tightly everything sticks to the bone. He thinks about his own body still hanging in his in closet in West Hollywood: his skin no longer has that same elastic snap.

In the afternoon, depending on the body, he might head to Venice and hit the boardwalk in a bikini. He watches the meatheads flex and deadlift 850. They slap their biceps and let out guttural roars when they clear it. They pretend not to notice him, but of course they do. He knows they’re putting on the show for him.

When the crowds clear, he takes his sandals off and walks on the beach. The eyes with sharp vision spot dolphin pods breaching offshore. Those with cataracts turn the water into a JMW Turner painting. He sits and feels the sand between his fingers and marvels at his anonymity.  No one in the world knows him, no one in the world cares. No one stares at him on the street. No aging men with thin hair, toes wiggling in their sandals, pull out their phones for selfies or ask him to sign photos of his younger self in a Seahawks jersey. No one yells “THE BOZ!!” at him or whispers to him that he was the first person they jacked off to. He watches the sun arc over the world and start to crash into the ocean. No one tells him that he could have been one of the best linebackers of all time, if he hadn’t blown it; he could have been an all-time great. He’d tell people that he’s happy with how his life panned out, if they ever asked. Would they believe him if he told them that? No regrets, he thinks. No regrets.

When the sun sets, the body starts to turn against him. His stomach flips upside down and a few fingernails fall out. The skin’s UV glow turns into something jaundice. He gets back in his red convertible and drives home in the blue dusk with his headlights on, holding his face onto his cheekbones, a trail of disconnected hair and eyelashes following behind him as they drop off his head and get picked up in the car’s current.

Brian Bosworth drags his wilting limbs into his house and up his stairs. He picks up loose fingers and toes as they pop off. He closes the blinds in his bedroom and takes off the body and slips his skeleton in between the covers of his bed. And for some reason, with his cold bones beneath the covers, he says he’s sorry. He doesn’t know to who or for what, but he says it. When he does, that vibration in his ribcage quits rattling. He’s forgotten about it all day until it stops. The room is black and silent. He thinks about tomorrow, about the sun swimming beneath him and popping its head up on the other side. He thinks that he might just wear his own body from now on. That he might put it on tomorrow and never take it off again. And just for a second, right when his mind starts to flutter and sleep crawls up through his spine, he’s hopeful.

Max Jaffe is a recent MFA graduate from Sarah Lawrence College. He lives in Brooklyn.

Photo by Armin Lotfi on Unsplash

← In Line at Walmart With All the Other Damned
Losing Will →