Did You Never See Dallas 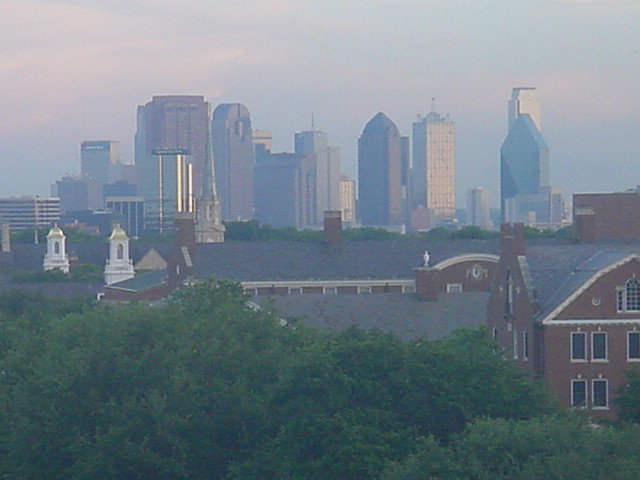 The dowager hears herself intoning the words again and again: “I wouldn’t be caught dead at that man’s funeral.” She regales first the queen who’s done her hair for 20-some-odd years, then an old college roommate who chances to call, and before long the stranger from across the street who previously merited only sidewalk pleasantries. “I will not,” Marsha says, “I will not countenance such a man.”

In a zippered pocket of her maroon patent leather purse is a front-page story recounting Coleman’s many achievements on behalf of humanity and beloved status among those who did not know him particularly well. The thrice-folded fish wrapper, she proclaims, tells nothing but a lie about the circumstances of his death. “He did not pass away at home! He drove off that ranch the suburbs have all but swallowed out there east of Denton, went down the road a mile or so. Parked his pickup out back of a cast-off clapboard schoolhouse. Around sunrise. In a patch of blooming thistle. Put one bullet between his poor border collie’s eyes and another into the roof of his own mouth.”

Marsha mixed up this cocktail of fact and embellishment after chatting with a young cop, who’d rung her doorbell and accepted an impromptu invitation to tea. It seemed that Coleman, a lifelong bachelor, had long ago named her husband as his executor. This was news to the widow, though she felt sure her immaculate mask betrayed nothing to the badge. It seemed, too, that the deceased had left a long but vague note apologizing to anyone he might’ve hurt. Did she know what that might mean? She did not. What about a tip regarding possible Polaroids in a safe deposit box? No. No, she really remembered rather little except the broadest strokes — the family fortune, the philanthropy — and that Coleman once had the blackest locks of any white man she’d ever known.

“Suicide is one of the gravest sins, not to mention killing a poor dog.” So Marsha keeps telling her listeners. They wouldn’t dream of questioning her commitment to canines or Christianity, much less imagine the ancient barnyard tang that creeps around the outskirts of her palate. It punctuates a vision in which her middle-aged son is 11 years old again, and her husband is alive, and they’re all walking to the stable with Coleman. She watches him watch the boy’s every move. His laugh is too loud; his nostrils flare. He cups a massive paw on the child’s bottom and mounts him on a swayback mare — left foot into the stirrup, right leg up and over. “Honeybee, step!” Coleman says, once the boy has the reins. The nag just pins her ears. “Step, you old barn-sour bitch!” he hisses, slapping her rump. She bolts. Runs at the fence, pulls up short, runs back at them, turns and repeats. The boy is screaming when Coleman gets him down, holds him close, tousles his haystack of hair as if he owns him.

Look at Mama standing there. Just look at that look on her face. Head tilted skyward with her eyes closed. That open-casket smile. Thank you, sugar, for getting this print made.
I’m welcome? Well, thank you for that, too, young lady! Just don’t call me Uncle Roland, OK? Uncle’s enough. Anything but Roland. I always hated that name she gave me. Even before I had a reason, it felt like a wound.

Look at her, so full of preening love for that man. This might be the best picture from all her livelong days, if you cropped out all the noise — the shoppers, businessmen, me.

When? Well, she didn’t die that day. Or today, or yesterday. I’m sure of that much. But from there it gets all gummed up.

No, it’s not memory loss. It’s memory gain. Jungle brain. Another trillion raindrops of information every day, on and on and on, even in here, refertilizing the pre-existing condition of infinity.

Sure. Go on. Look it up on your precious phone. Find her exact date of death. What’s the point?

My eyes? Yes, they’re … leaking. They didn’t do this at her funeral. It’s probably just the sun. Close those curtains for me, would you, please, darling?

Thank you. Much better.

Maybe I’m leaking because this picture’s like every picture — tells too many stories, begs endless questions. No time to taste them all, spit out what we can’t swallow.

No, I don’t want any lunch.

How about if we do like the doctors do, when they’re testing your mental status? I carry their list of questions around and practice answering to the mirror every morning, in case they try to ambush me.

Ready? Number one: What is her name? Mama. To me she’ll always be Mama. How’s your mom, by the way?

Sorry to hear that. You tell her she’ll always be my favorite cousin.

Yes, I know she’s my only cousin.

OK. Number two: How old is Mama? It’s her 30th birthday, there in the picture. Early spring. 1949. We’re the party. Her and her lover and me. He’s the guy with his finger on the trigger. Of that camera he’s hiding behind.

Yep, that’s me, over at the edge of the frame. The 13-year-old evil-eyed pissant, shivering in shorts.

I do know she lived to an overripe old age. And I’m getting pretty close to rotten myself.
You almost smiled at that one. Well, your cheeks twitched. Is that just a nervous tic? They say young people today live with so much anxiety. As if we didn’t.

She loved to let bananas blacken. Fruit flies adored our kitchen. So did all the other kids in the building, at least when Mama was making banana bread. When she was home. When I wasn’t living with her parents in the Bronx.

I saw on one of those nature shows that the average fruit-fly fuck, not counting foreplay, lasts fifteen minutes. Maybe twenty. Then they catch forty winks and are ready to go again. They put rabbits to shame. Not to mention most of the men I knew. In my younger days.

Number three? OK. Where does she work? American Overseas Airlines, after Daddy died in the war. Way up in Alaska, he was. You didn’t even know the Japanese invaded there, did you? Don’t worry. Most folks don’t.

A stewardess. Flight attendant, I’m supposed to say. Fly, flew, flew the coop, New York to England, Ireland, Scandinavia. And Germany. That’s the one place I get to go with her, this one time. It’s where she met Lover Boy, a couple of trips ago.

No, I can’t remember his name. But all the trivia is right here on the tip of my lips. Works at the Hamburg airport. Food service to the airlines. Used to run the kitchen at a concentration camp, down the road in Bremen. Not one of those places that gassed the Jews, he says. The kind where they worked prisoners of war to death, building U-boats. Poles, mostly. Some French. Says he hated that job. I bet.

Who was it who said you get used to anything in the long run? The jury’s still out on that one, as far as I’m concerned.

Bremen’s where we are in the picture, actually. On the market square. Lover Boy couldn’t wait to show off my namesake: this 15th-century limestone behemoth named Roland, which honors an eighth-century Christian-supremacist martyr. What passes for a statue of liberty in Germany. That’s a magic Muslim-slaying sword he’s clutching. And the little framed artwork over his crotch? You can’t really tell here, but it shows an angel playing a lute. Surely singing the impossibly long and racist “Song of Roland.”

When Roland saw the abhorred race,

That’s all I can remember. Or can’t forget.

Where were we? Oh yeah. Number four: Where does she live? In the picture, wherever her wings take her. And finally lands in this hole — the one that I’m now in. Quite a few of us old flight crew members here. In the wasteland between Dallas and Fort Worth, forever grounded. God knows what this suburb’s called, or how anyone can tell where it stops and the next one starts. But the good news is it’s right under the flight path, so even an ancient like me can hear the planes. She loved the roar to her dying day.

Sweetheart, I need your help with something else. A little paperwork. Wheel me down to my so-called apartment, OK? Help me fill it out?

It’s to change my name.

Yes, I’m finally ready to get rid of Roland.

I don’t know. How about Albert, for my daddy?

It’s never too late, is it?

Brooks Egerton is the co-host of Sewanee Spoken Word. He is a dramatist, and his work has been featured at the New Play Exchange and in DMagazine. You can find him on Twitter @brooksegerton.

Photo by Jennifer Fred Merchan on Flickr. No changes made to photo.