Dolls for the End of the World 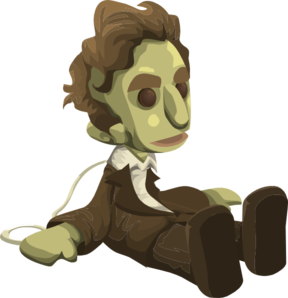 The warmth came and left, and, no sooner, it left and came. There was no way to guess what the world would become. At least it remained. Charred oak trees surrounded by misplaced puddles. Rivers as black as burnt cherries. Sputtering flames along the receding riverbanks. Days shorter and, still, longer.

Patrick stood on the cliff and looked down at where he’d come. In his arms, Theodore. Always Theodore. A boy and his doll. They were and they were not. Broken, but together. With a voice, yet voiceless.

Patrick’s father sat on the edge of his son’s bed and stared into his hazel eyes. He refused to look elsewhere because, then, he would see them. The dolls stacked in Patrick’s rocking chair. The dolls along the scratched dirty floor. The dolls hanging from the ceiling fan. The dolls, of course, scattered on the bed. The man never imagined his son would be one of those boys.

“Pa, can’t I get a story tonight? For my birthday?” Patrick asked quietly, turning his face toward his pillow.

His father didn’t hesitate. His hand flew as if he were a fox and his son’s face the prey. Hungry. Vicious. “Ain’t no story gonna make you a man,” he said.

Patrick pulled his hand up to his face and felt the warmth from his cheeks. The scar would fade just as the others had.

His eyes remained downward. He searched, among the many, for his favorite and longest companion: Theodore, the doll with a drawn-on navy smile and black button eyes. “I’m sorry you had to see that, Theodore,” he whispered.

His father snatched the doll from Patrick’s hands and tossed it onto the floor. Theodore’s stuffed body bounced with no thump or ding. The quiet was worse than the taunting. His father stood, and his foot found the doll. He smothered Patrick’s beloved friend. “Yeah, Theodore. I’m so sorry you had to see that,” he mocked.

Patrick sat up in his bed and made a fist. He shook it in the air surrounding his father’s face. “Don’t touch my doll. You’ll hurt him,” he said.

His father laughed. “It’s a doll, you sissy boy.”

“You don’t have any friends.”

“You’re just mad because you are scared of what’s coming.”

“Oh,” Patrick’s father said. “Something’s coming, huh? I bet Theodore told you that, too, didn’t he?”

Patrick sat still, staring at his father. “He read about the signs in a book,” he said.

“Ha! And don’t ever say that I’m scared. I’m not scared of anything.” Sweat trickled down the man’s forehead.

“Yes you are. You know how I know?” Patrick asked, pointing to the window. “Because it’s not coming anymore. It’s here.”

He watched his father’s reflection among the blazing background.

There are some things that can’t be contained.

Shoes already covered Patrick’s feet when he hit the ground. He lifted the mattress and grabbed his frayed satchel. Two pairs of jeans, three ragged shirts, a couple of unmatched socks, and a pair of dirty underwear. It was all the clothes he had.

He circled the room, grabbing his dolls and stuffing them in the bag with his clothes. All of them except Theodore, who Patrick held him in his arms.

“We have to go,” the boy said to his father. “The house won’t stand long.”

But his father didn’t budge. Shock held him in its trance.

“Pa,” Patrick called as he touched his father’s shoulder for the first time since his mother had died. “Pa, come on.”

He remained as still as an ancient stone, hiding his own mystery. Patrick looked at his father again, but he saw nothing more than a silhouette.

Trees collapsed. Embers crackled. But the man at the window began to laugh. Uncontrollably. Hysterically. Shamelessly. “You’re not special, boy. Don’t make the mistake of thinking you are.”

“Be a man for once in your life. Come sit here and let’s die together. As men.”

“Forget it. You never were much of a son anyhow, you know. Go on—go running with your dolls.”

Patrick reached for his father’s shoulder again, but his father intercepted the boy’s touch and pushed him to the ground.

He regained his footing. Then, he turned to Theodore and asked, “Now is when I do it?” He waited only a second before he reached behind his back and pulled out the first doll his fingers found. He placed it at his father’s feet. Loneliness was too cruel of a thing for even him.

As he turned the knob, an explosion came from his bedroom.

Stars fell and died. Dirt floated and sparkled. Everything was nothing, but, still, there was something. Patrick, with Theodore and his sack full of dolls, played dodgeball against the crashing world. He didn’t have a choice. He had to survive. Theodore told him as much.

Patrick’s feet kept moving even as smoke choked him. He coughed and spat, but it did little good. Only more came.

He tasted metal. Or was it blood? It was better not to know.

The explosions kept them hidden for a while, but tears streaked his face upon the sound of the first one. The crying. The moans. The fear. The sounds came so often that they became a part of the settling breeze.

They brought the boy comfort because to not hear them meant death.

Patrick chased the first voice until he found it. A man—much older than his father. Patrick fell to his knees and brushed away the dirt and leaves that clung to the man’s body. He held him. Then, he hugged him.

The man was quiet as he looked up at the boy’s eyes.

“This is for you.” Patrick said, grabbing a doll from his bag and handing it to the man.

The man wrapped his arms around it just as Patrick had done to the man. His shoulders fell as he breathed—smoother and softer.

“Do you hear the others crying?” Patrick asked.

Patrick found the next one. And, then, the next. And the next. Old and young. Sons and daughters. Brothers and sisters. Fathers and mothers. Broken but together. People as common as stones.

Each took a doll from the boy.

Whether it was days or weeks or months, it was impossible to say. Patrick stood, with only Theodore, at the edge of the cliff and looked down at the remnants of the house from which he’d fled.

“I know that I need to go back, Theodore,” Patrick said.

He cried when he found his father. Cradled in his charred arms was the doll Patrick had left at his feet.

Patrick sat down with Theodore by his side. “Do you think I’ll ever be a man?” he asked. But Theodore didn’t answer. And he never would again.

Patrick looked up and saw them. All of them.

Clutching their dolls, they waited to hear what the boy would say next.

Bradley Sides is a contributing writer for Electric Literature. His recent fiction appears at The Airgonaut, Empyreome, Fair Folk, Fluland, Ghost Parachute, Literary Orphans, Rose Red Review, Spelk, and elsewhere. He lives in Florence, Alabama, with his wife, and he is working on his debut collection of short stories.