Hammers Are the Domestic Tools 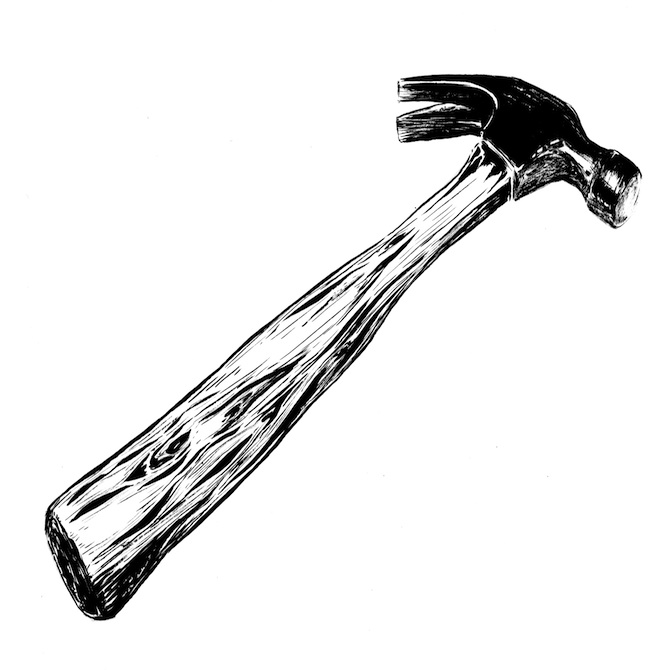 Life was wearing on me. Married two and a half years, I handled it in the old ways. Then the handle of the hammer snapped on the thumping stump and left me with a half-sack of live rats to rid of some other way. I would have let them go, but getting them into the sack had been difficult, and I hold on to simplicity. No effort in vain. I tossed them in the koi pond I dug for her. She always wanted one. She pays for more than half, so she gets what she wants. I do the work, am considered handy. It’s a perk. In the bag, the rats swam for fifteen minutes. They never did sink.

I bought a new hammer. She wanted to hang curtains in the master bedroom. They were wine colored and heavy, the old curtain rod bowed in the middle. The curtain collected slowly, day upon day, from the ends toward the center. The house was old and we were improving it. I drove nails into a stud while we joked. It was nice. Still the curtain rod was crooked and I had to pull the nails. She said this, you have to pull those nails. Holes rent in the sheetrock when the nails cleared. I puttied them and tried again the next day. The curtain rod was crooked. She said this, the rod’s still crooked. It looked fine to me, but for the level. The level doesn’t lie. I pulled the nails and the putty came with them. There were holes in the wall. I was out of putty. I swung the hammer and missed the mark. Sent the hammer through the window, cut the length of my hand, wrist through middle finger. After Emergency the store would be closed. I went to the other store.

She took her favorite wedding photo from the box marked photos and hung it over the mantel, tacked photos of our families on the wall going up the staircase. I admired her from the back. She was young in a home that we saved for and earned together, though the percentage it took from my check was always larger. I never cared much, until. Watching from the kitchen doorway, vacant counters and cupboards behind me, light coming through the windows in dusty rays down to the old linoleum we’d take up soon. She breathed onto the glass of a frame, rubbed, startled when she caught my reflection, dropped the portrait and pushed me away when I came to her. She does not like being frightened. A fact that used to be fun, sneaking up on her in the shower, or at her desk, hearing her scream with my fist tight in the movie theater. But at a point somewhere behind us the fear turned shameful. Grown-ups do not cringe cower collapse into laughter. I left her to pick the glass from the stairs.

Out in the yard, the koi sucked at the drowned rats in burlap and it seemed sad. I fished the rat sack from the pond with my landing net. There are no secrets between us, we hide nothing from the neighbors. Through the windows you can see the best snatches of our lives, though we speak of them less and less.

She squawked a bit with each loud flap of the tenderizer, and she left flattened chicken, thin and bruised between the parchment. She dipped the breasts in eggs. She breaded them. She fried them. I watched, tapping the pegs of old planters together in the yard. I found boards in the garden behind the thumping stump covered in a moldy cloth tarpaulin. I was out looking for that hammer’s head. Nights, she watches shows while I listen. I reshaped the handle so the head might fit again.

The planter boards were molded and bowed, and when I got them together I figured with the saturation and dark watermarks they’d split when they dried. She said that’s exactly why she wants them. That’s fashion antique. Busted, broken, weathered with character…

Danilo Thomas is a MFA candidate in fiction at the University of Alabama where he worked as the Fiction Editor for Black Warrior Review issues 38.1 and 38.2. He currently teaches in maximum security prison facilities for the Alabama Prison Arts + Education Program. His work has been a finalist for the 2012 Italo Calvino Prize in fiction, and can be found, or is forthcoming in Parcel, Whitefish Review, Juked, Midwestern Gothic, Fiction Southeast, Precipitate, and other publications.