I’ll Explain That There Was a War On 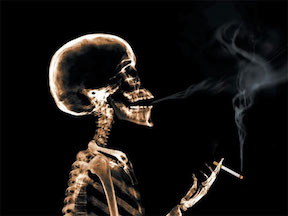 My grandfather used to ask to see my cigarettes. “Get the bell,” he’d say, turning the pack over in his hands, “it’s pell-mell.” Then he would smile and ask if that commercial was still running, even though he knew it wasn’t. He had quit smoking before I was born, but he still asked how my cigarettes tasted, if my brand still burned as slowly as he remembered. After the revolution, he was ashamed to have been drunk with Hemingway because, he said, men shouldn’t associate with Communists. Then he got cancer. Then he died.

I had a close friend named Jason who gave me a bottle opener keychain of a menorah with some Hebrew words and dates on the back, none of which I understood. He had stolen it from a friend of his, and he gave it to me because I was practicing Judaism at the time. It was a Yom Kippur present, which is thoughtful. Jason still records heavy metal riffs he’s written and sends them to me in text messages, but he turns the gain up so loud I can’t make out a note.

My mom tells me that all the men who ever hurt her—her father, her first husband, my father—were smokers. She asks how both of her sons became smokers. She thinks that if I were a daughter, I wouldn’t smoke.

She used to say that any son of hers would speak Spanish, so she wouldn’t feed me until I could ask in Spanish. But I was already seven years old so I just made my own dinner. Years later, after I had learned Spanish, I realized that she didn’t cook.

Jason had worked as a mall security guard until he got fired for terrorism. He had actually just typed some Slayer lyrics into a blank email and accidentally sent it to the corporate office, but the bosses called it terrorism because there was a war on. There was a group of us that, when one of us lost a job, would all go in the woods and drink as though it was the only way to make the sun come up.

It must be fifteen years since I’ve seen my brother go an hour without getting high. He keeps a one-hitter in his pocket and drags off it whenever he’s outside or in the car. When he got back from Iraq he became a libertarian. Now he says that if a man wants to marry a man, or a duck, or a shoe, that’s no one’s business. He says he doesn’t remember how many times he was shot at or blown up in the war, and why would he try to.

After his dad killed his grandpa, Jason joined the army. He never saw combat. He was discharged when he couldn’t stop pissing himself in bed. He told me it was because of a kidney infection, but his third Steel Reserve told me he was killing himself every night in his dreams. In both cases I told him he should get checked out. Then we drank until the sun was up.

Erick Brucker is from Richmond, VA.
← What Gable Massey Did After His Wife Left Him
Curable by Marriage →