In Line at Walmart With All the Other Damned 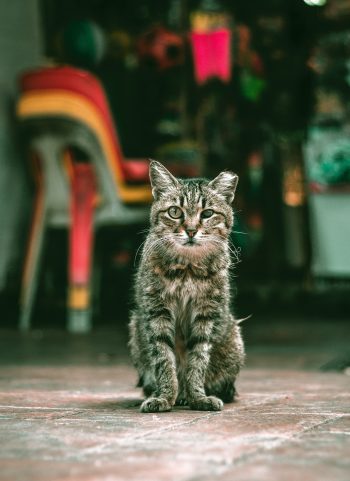 There is a cat at his door. It wants in from the cold He doesn’t own a cat, so if it wants to get in to his kitchen it must trust to something good in people and to the warmth of their houses.

He walks to Walmart to pick up a few things. The houses he walks by are mostly rentals now, their trees thickets, and the lawns patchy and sere. The fences all need painting and planks. At Walmart the express line moves like the clock in class when he was fifteen, like it is waiting for permission to move. The people in front of him are old. They talk to the clerk, talk of small things like the weather and whether or not it is busy or slow. They can’t see that she doesn’t want to be there, with them. An old man, very old, takes four minutes just to open his wallet with his spotted hands. He has to hold his wallet at arm’s length to get it open because he can’t see anything within arm’s length.

Walking back home he runs into his neighbor in front of her house. Her name is Vera. It’s a name from another era. She is older than he is. She has children somewhere, but not here. She had a husband once, but they divorced thirty years previously. He’s years and miles away.

Vera doesn’t ask him how he is. A year ago a pipe broke in her house and flooded some rooms, some closets. The adjuster from the insurance company came and settled up with her. There was an argument over some things. She wanted money for her wedding album. She repeats her story now:

“I’ll give you one-hundred dollars,” the adjuster told me

“That’s not right,” I said. “That’s not enough. It cost me two thousand dollars to get those pictures taken, to get that album. It would be more than three thousand in this day and age.”

“Look,” the adjuster said, “I’m divorced, you’re divorced. I’ll give you my wedding album and we’ll call it even.”

I got only one hundred dollars. I felt I had to take it but I am not happy about it.

This was the first time she’d spoken to him in six months, and Vera complains to him about the album just like she had when it happened. She couldn’t remember where he had worked, or that he was not working now. Vera could offer no pity, no consolation, without first being prompted, and he didn’t want to beg. She thought only of the wedding album and of what she hadn’t gotten for it, so she told him her story again.

“Well,” he said, by way of trying to sympathize with her, “maybe you can find the photographer and see if they have negatives and recreate the album. Maybe the insurer would pay for that?”

“It’s hard to put a number on some things I guess,” he said.

She talked right through him, still mad about the wedding album. “If you don’t ask, you don’t get,” she said.

He asked her if she had a cat, and told her about the cat coming and waiting at his door.

He will have the same conversation with her again, until he loses his house and goes, or she dies and is gone. She wore pants of some sort and he noticed that they were too big for her. She’d drawn the west up practically to her sternum. There was enough room between her neck and the collar of her shirt to fit a rolled-up towel in and her head bobbed when she talked. Vera has become lean now, he thought, and sallow too. She’s done the math. She knows that less is coming in place of more. She knows no one has any money even though things get cheaper all the time. She wanted two thousand for that album. Two thousand, two thousand, two thousand. I am owed. People would rather feel right than be right. They believe what they say when they say it.

He walked back to his house where the cat waited for him on the front step. The hands on the clock move so fast now, he thinks, they used to walk and now they run. Those old people in line, the clerk indentured to serve them, Vera too. They fall now, like people running downhill and losing their balance, and here he is in line waiting with them and then falling with them, in the same order in which they stand. Some say that God is above, in the firmament. Some say that God is below, in the foundation. Whatever they say he is not here on this street, in this life, except in the cat, with its animal patience and no internal, ticking clock. It trusts that the door will open. It knows only that it is warm inside and that it’s good to be warm.

Steve Passey is from Southern Alberta. He is the author of the collections "Forty-Five Minutes of Unstoppable Rock" (Tortoise Books) and "The Coachella Madrigals" (Luminous Press) and many other individual things. He is part of the editorial collective at The Black Dog Review.
← Daddy Said I Had To
Brian Bosworth and His Closet Full of Bodies →