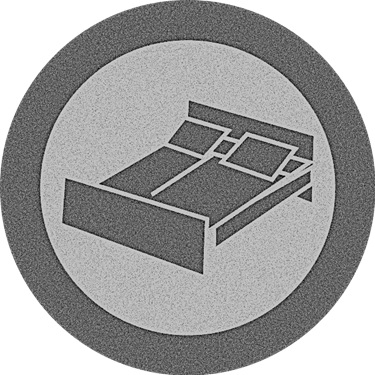 Jackson was waiting for his wife when he noticed the face on his motel room window. Outside, fireworks bloomed over the falls and illuminated the face again—a perfectly formed smudge, like a greasy imitation of Christ on the shroud of Turin.

He got down on his knees for a closer look. The face was just a few feet up from the sill, a ghostly image like the brightness left behind the eyelids after a camera flash. It seemed to look back at him.

The fireworks popped again and bathed the room in kaleidoscopic colour. He ran his finger down the cheek of the face on the glass, then sat back down and lit a cigarette. The motel rooms he had occupied always had fingerprints and other smears on the windows, but he had never seen a face. The room probably hadn’t been cleaned in weeks. A sunken bed and a couch on the other wall faced each other down like enemies, and a greasy, yellow smell saturated everything.

It was well after midnight, but there was activity everywhere outside the window. The falls roared in the distance; two large men across the parking lot shook hands and passed drugs between their palms. A steady stream of cars moved up and down the adjacent street, and Jackson watched them eagerly, waiting for the red Chevy he knew would pull into the lot and park in front of his room.

He waited because he had to wait. The cops had shown up the night before to separate them again and forced him to cool down in one of the tourist-trap motels by the falls. He waited because his wife always picked him up the next day so they could start all over again.

After the fireworks stopped and three or four more cigarettes were stubbed out, he picked up the phone and dialed. He listened until he heard his wife’s voice on the machine and then hung up. He wondered if he could pull this whole thing off, and if he did, would it be enough to drive her away for good.

He flipped through the phone book until he found another number, then dialed that one. After two rings he hung up and lit another cigarette.

The face stared at him.

“Plaza at the Falls. You know it?”

“Yeah. What you lookin’ for tonight?”

“Blonde. Not too tall, though.”

“109,” Jackson said and watched the traffic. It was cold and drafty in the room but he was sweating anyway.

“Wait a half-hour and someone’ll knock. Her name’s—”

“Listen, I want a girl with meat on her, okay? Someone real. I like…” he trailed off when a Chevy pulled into the lot outside.

The car drove past his window and out the other side of the lot onto the cross-street. Jackson coughed and wiped his forehead with the back of his hand. It was damp.

There were three sharp raps at the door and Jackson stood up but didn’t answer. He wondered how long the person on the other side would wait if he just ignored the knocking. Three more knocks—louder now—and he opened the door. A stumpy blonde woman stood on the other side, wrapped in a sequined green tube top like a band-aid wraps a fresh wound.

He moved away from the door and slid the chain lock on once she was inside. Her thighs sagged a bit from behind, like two loaves of bread stood on their ends, but he didn’t mind.

She sat on the bed and put her little clutch purse next to her. “I’m Candy,” she said, and crooked a smile at him.

“Two-fifty an hour—two hundred fifty. You pay up front, and then I’m yours.” She gestured down her body. “The whole thing.”

He got out his wallet, but hesitated opening it. “I’m waiting for my wife, so I’ll just take an hour. You might have to leave early.” The words came out of his mouth and he wished they hadn’t.  But by now there was no going back.

She shrugged. Her eyes never left his wallet. “You still gotta pay the whole hour,” she said.

He counted out a handful of twenties damp from his palms. “Yes. Alright.”

She put the bills into her clutch and pulled out a little steel pillbox. Jackson stood at the foot of the bed and looked out the window again. He saw their reflection skewed on the window. The face was there too, watching, but he tried not to notice it. It made him uneasy—the fact that there was a real face out there somewhere that fit the smudge, that someone had left a piece of themself to watch tourists and whores groan on this sad little bed, or carpet burn their knees on the rough, dirty pile.

He thought of wiping the face off, but couldn’t bring himself to do it. Maybe it was like a fingerprint—maybe the breadth of a forehead or the angles of cheekbones were equal to the mysteries of those one-of-a-kind loops and whorls. He saw something unique in that face, almost pure, and he was tired of ruining everything that had once been good.

So he pulled the drapes over instead.

Her face was craggy and the corners of her eyes sloped down at a strange angle.  Jackson imagined her face pushed up against the glass. Maybe the smudge belonged to her.

She opened the pillbox and smiled. “Want a bump? Twenty bucks, it’ll even you out.”

He shook his head no. She shrugged. “So what’s your name, anyway?” she asked, then snorted the tip of the key and her eyes opened up wide.

She put the pillbox away and slid down her top. “So,” she said.

Pale flesh swelled out over the top of her skirt. Her skin stretched over her breasts, which seemed hard and absurdly upswept like an old ship’s prow. He was sweating fully now and his heart beat quickly, but at the sight of them he felt an irresistibly pleasant knot tightening in his stomach.

“You like that, baby?” she purred. “You wanna party now?”

He sat on the end of the bed and she slid over, pressing her breasts onto his arm. The face watched silently from behind the curtain.

He turned to her and moved to kiss her mouth but she moved her head away. “Uh uh,” she said, and began working on his belt. A pair of headlights flashed behind the curtain and Jackson jumped up. Candy cursed and flopped back onto the pillow. The lights lingered for a moment, then moved on slowly.

“Can we maybe just talk for a bit,” he said, “for a little while at first?”

Candy reached into her bag. “Your dollar. Clock’s ticking. Do what you need to do.” She did another big bump and pulled roughly on her nose.

Jackson sat back down, trying to think of what to say. He was biding time, he knew it. Something would happen soon, though, it had to—and he would be ready when she came.

Candy slipped a smoke out of the pack on the night table. “You’re not gonna change me, if that’s what you’re thinking,” she said, and lit the smoke. “I do this for a fuckin’ living, and I’m pretty damn good at it too. So don’t waste your breath.” She took a vicious drag on the cigarette and blew the smoke at him. Her eyes were big and red, gaping, and her hands were jittery as she sucked on the cigarette.

He looked in her eyes—he was sure now the smudge was hers—”Yeah,” he said. “Well, you can’t enjoy it that much, can you? Being a whore.”

She shot up, struggling to pull her top up over her breasts. “Hey, fuck you, okay? You call me up—you call me cause you’re lonely and I come over and you get to fuck. And you’re just sittin’ here waitin’ for your wife to pull up and then what? You’re gonna tell her you love her, right? I’ll be out on the street and that bitch will never know and you still got fucked. You—”

Headlights flashed outside the room again and stayed there, lighting up the curtain so the face on the window cast a shadow against it. Jackson lunged over the bed and grabbed her by the hair. She started to slap at him while he dragged her over to the window, forced her onto her hands and knees and got behind her, pulled up her skirt. The lights were bright and blazing through the curtains. A car door slammed. His heart was drumming. He pulled a corner of the curtain back and the light seared his eyes, but he kept them open and pushed Candy’s face into the window. He pushed hard on the back of her head, driving it into the glass until she made a high-pitched yell and he let her go.

She got up and ran for the door. Her face left a warped, broken-yolk smudge on the glass.

Someone was tapping on the window, and when he pulled the curtain back again he saw only shadow before an aura of brutal light, spreading in rainbow streaks like the sheen on black oil. The shadow banged on the window, but Jackson could only look at the faces smudged on the glass, one still and perfect, the other a greasy smear. He knew that he couldn’t hold on to what would always slough off of him—how many marks he had left, how much had been smeared off and left lingering in the places like the perfect imprint of a face on glass?

The shadow kept banging away, and Jackson started to cry. He pressed his fist onto the window.

It made a mark.

Later, much later, Jackson laid on the bed smoking. He picked up the phone and dialed a number. After six rings, the machine came on and he hung up.

It was quiet outside and a light snow was falling. The parking lot was empty. The falls roared, but by the time the sound reached Jackson it had become only soft static.

Two faces stared at him from the glass, and he took another long drag from his cigarette. It crackled as he pulled on it, and when he finished he took the phone off the hook and went to the window.

It was hot in the room but the glass was freezing when Jackson put his face to it, nestled himself right into that perfect smudge, and found that it fit.

Grant Loveys is a freelance writer living in St. John's, Newfoundland, a town clinging to Canada's eastern edge. His work has appeared in Paragon, Foundling Review, madswirl, Full of Crow and The Legendary, and is forthcoming in Oak Bend Review and Breadcrumb Scabs.