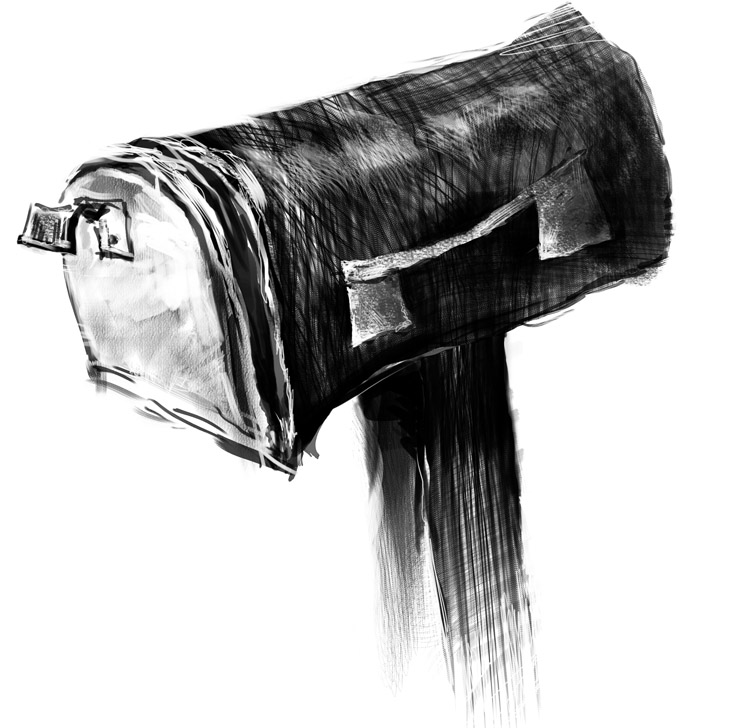 When Mr. Berzansky left our rural community for the State Pen, his niece moved into the house. I was in college and Jess Berzansky was probably around twenty-seven, though cigarettes and booze had already started to affect her looks. She maintained a rigid rotation of three or four stained t-shirts, each logoed with a different brand of light beer, and all of them clung to her not fat, but not exactly skinny body. Her jugs were big, and even though she wasn’t that old, they sagged, because she either refused or forgot to wear a bra. I always caught myself staring at her shirt, trying to determine if the dark spots on her chest were her nipples or just stains. From a distance it was hard to tell. To complete her look, Jess usually wore a pair of yellow slippers, spotted with dirt from treks down the graveled driveway and into town for more alcohol and maybe even some non-proofed groceries. Aside from her liberated chest and overall disheveledness, Jess kept herself looking—not “well,” but not explicit either. I was always grateful for that, because our other neighbors were shameless. What I mean is that she wasn’t the type of white trash that showed too much skin, the kind that lived on the otherside of Thorncreek. The Rochelle family definitely fit this sub-category.

The Rochelles, pronounced “Row-shells,” were filthy poor due to lack of birth control, and their half-nakedness was a result of this population bubble forming and bursting every nine months. My father called them, “the rabbits down the street.” They must have had ten kids, but I could never get a firm count because with families like that, the kids are wild and literally running off, usually into the woods to go play with guns and knives. Jeremy Rochelle stuck cherry bombs in the old mailboxes one Halloween, yet only the middle box yielded enough to have a hole blown in it. You only get one shot to blow up a mailbox, because it makes so much damn noise. That’s why if you’re doing it, you should stick four or five of ‘em in there. One should never be half-assed when it comes to small explosives. Jeremy was a sloppy criminal—I think he also ended up in prison for some sort of meth lab bust. Maybe he and Berzansky are cellmates now.

I wasn’t surprised he half-assed his vandalism. His parents demonstrated an equally half-assed approach to keeping up the family home. The Rochelle’s house didn’t have an inch of siding on it, being only wrapped in metallic Tyvek insulation. The poor shits’ house looked like a pathetic space shuttle or like a massive appliance stripped for the steel. Pink clouds of insulation poked out all over the damn thing. On one of my usual runs, I once saw two Rochelle girls eating it, probably cause it looked like cotton candy. The Rochelle’s house was about as close a thing we got to “modern architecture” in Lake County. In our wooded landscape, the place was an empty Bud in a ditch, just on a bigger scale.

The Rochelles and Jess Berzansky were the two messes on either side of our property when I was growing up. Our house was originally my grandfather’s hunting cabin, which once functioned as a regional den. A Klanster until he died, he made it to Grand Cyclops status, which really only means that he hated more kinds of people, and to a greater degree, than others in the club. Not only was his hatred of the Imperial status, but it was also considered progressive: he was the first, they say, to really go after “the faggots” too. He died when I was about seven. My sole interaction with the Grand Cyclops was a short visit to the Forest City regional nursing home. He looked like a tenacle-covered alien the way every hole in his body was plugged with plastic tubing, weaved into the blinking machines at the bottom of his bed. He died from emphysema and the sound of his voice added to non-human quality of his appearance. In a robotic and hissing monotone he offered me one of his Fig Newtons. I’m not sure if the cookie was stale or if they always taste piss-vile, but it was the first and last time I ever ate one of those things. He died a week later.

The Grand Cyclops lived on in only my Dad’s expletives when rednecks would show up looking for a place to squat and brood and pay tribute to the past. Dad sold all of the Cyclops’ things really fast; he even donated the IKA memorabilia to a Civil Rights museum in Atlanta. But even after all that, my dad ended up moving us into the house. It was modest for five and there were problems with the roof, but my mother, aside from suggesting an addition, never complained. Dad said that we’d never get much money for it because of our neighbors, so we grew up in a house that was too small for us, and played in a yard broken in by hate-rituals. My brother and I slept in a bunkbed on the bottom floor, and my little sister, Emma, made do with a converted gun-closet turned nursery bedroom. We were cramped on fifty acres…

Kate Scarpetta, a native of Northeastern Pennsylvania, has published several works of short fiction in various journals including Word Riot, 14 Hills, The Brooklyn Review and FiveQuarterly. In 2011, she graduated from Princeton with a degree in English and an award, "Outstanding Work from a Senior" from the Creative Writing Department. Currently, she lives a nomadic life as a professional golfer in pursuit of earning her card on a major tour. Kate is in the process of writing her first novel.

← I Was a Stranger
Dear Doctor Arthur Conan Doyle →