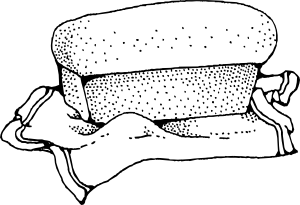 A love story can begin in a conference room as easily as any other place, and the principals do not have to be in attendance. Indeed, they may have yet to be born.

In that conference room, in the United States following the Second World War, a man of European descent in suit and tie proposed extending economies of scale further into the civilian sector, continuing the work begun by Henry Ford.

To wit: dough mixed in industrial quantities at central facilities, with standardization of quality, could be trucked out from a hub to spoke locations and finished in ovens that required tending by unskilled labor following a simple protocol. In short, bread without bakers.

Accepted, the idea was diffused like leavening through a sponge of flour and water. A town beyond a certain size almost invariably had a finishing plant that sold fresh bread and rolls wholesale to groceries and supermarkets and overruns and day-old bread retail to the public at a discount.

In one of these facilities, in the American Midwest, two employees came to notice each other. As employee numbers have many syllables are difficult to remember, and they do not convey gender, we can call those employees Mark and Linda. From different towns and high schools in separate conferences, they otherwise might never have met.

If means of production change, the fundamental things do not. Across the break room, in the parking lot, Mark noticed a new and graceful girl who must have just started in the office. He hadn’t seen her on the floor, and in heels and a skirt most days she certainly was not dressed for it. A closer look revealed that she was not wearing a ring, and further looks confirmed that she had yet to acquire one.

Mark wondered how he might approach her, and how he might introduce himself. “Hi, I am Mark. This is the only job I could get, so I’m probably going to be around for a while. Do you want to hang out?”

Linda noticed him anyway. She observed his quietness and courtesy, and how he would clean up after others as well as himself in the break room.

There, when the only seat left was at her table, Mark and Linda met. Words were offered and reciprocated, plain words in simple sentences that served less to convey information than as vessels of affinity. A question about her pendant led by several leaps of association to a shared interest in zoogoing and to places each wanted to see. Their lists in large part overlapped.

That conversation was followed by another the next week, and two the week after. This momentum sustained itself, leading to a cup of coffee after work one day, a drink but not two several days later, and an unmistakable date on a weekend, ending with a mutually sincere but restrained kiss.

To anyone other than Mark and Linda, the subsequent months would have appeared mundane, even pedestrian. They made a total of five visits to three different zoos and one to an aquarium. They went to parties as a couple and often spent nights at each other’s homes. They managed to afford an off-season long weekend at the Indiana Dunes—the destination of a lifetime for neither of them, but at any rate a change of scenery. They made up a planet of their own, with its own atmosphere. For them the turning of the clock’s hands and the lifting of the calendar’s pages were infused with a glow invisible to others. They made references, in passing and in jest, to getting a dog together, and without letting Linda know Mark began to set aside money for a modest ring.

Yet in their sixth month together their planet began to wobble on its axis. Linda started to appear in the break room less often, and she wanted to work through lunch. At day’s end she wanted to go straight home, alone, or to a ceramics class on Wednesday night. Mark did not know she had registered for one.

For days and then a week they did not see one another except at a distance, and Mark’s calls went through to Linda’s voice mail. As Mark was leaving one lengthy message Linda picked up and said, “We need to talk” and shortly thereafter “I’ve been thinking. About us.” She did not see how they could have a future together. She wanted children, and what kind of life could they make for them on her salary and his wages. Could they even cover the veterinarian’s bills for a sick dog? Mark was in many ways sweet and wonderful, but . . . She did not finish the statement.

Mark drank through the next several nights in the way that men will do. In spite of hangovers his bread and rolls met company standards, although he incurred several burns on his hands and arms after accidentally brushing against hot trays and elements. This pain, which each time provided a distraction for a few minutes, would by day’s end require further alcohol.

Mark made further unanswered calls, and one call answered with “I’m not alone.”

He left notes in Linda’s office and mail slot until a friend brought up the company’s harassment policy. In this economy Mark did not expect to find a better job, if any.

In a weak moment, however, Mark wrote one more note on an index card that read in its entirety, “I miss you.” He left the note on the hood of Linda’s car, now with a “For Sale” sign, ensuring she would notice by clipping the card to a loaf of sliced rye that could not be sold because of being misshapen by a collapsed bubble. He thought of taking the package back, but with one final attempt he could live with himself, if not Linda.

Linda took the loaf home. If need be she could present it with his most recent notes to provide evidence of stalking. She discussed the situation with the attorney she had begun to date?

Would Mark attempt to poison her, he asked. Linda knew he was not capable, but asked if she should call the police or obtain a restraining order. The attorney advised waiting until his actions became frequent or more extreme. What had happened so far would be assigned low priority from the justice system.

“But what do I do with the bread?” Linda asked. “I can’t keep anything he’s given to me, but I don’t feel right about wasting food.”

This was an interesting question and a distraction from how the bread had come into her possession. The evening’s wine guided them to a solution. She could give the bread to a third party who did not know Mark and who would not taste its history.

That was the theory.

The neighbor to whom Linda gave the bread came to ask how Linda received it, and the neighbor developed doubts of her own. Her husband shared them, and after his own share of wine sang a paraphrase of lyrics from his youth. “Tainted loaf. Oh, oh, oh, oh. Tainted loaf.”

Calling a friend with no small intellect but only a small budget, the husband asked the friend how he would approach the loaf at least metaphorically salted with tears.

“It doesn’t seem right to let food go to waste,” the friend said. “If you don’t want it I’ll take it.”

The friend shortly thereafter went through half the loaf, fresh and toasted, with various fillings, spreads and condiments. Yet for all his intellect he did not think ahead in this regards, and there was only so much he could eat in a short time. In the dry winter air the slices went stale, and even among the frugal a single man is unlikely to make croutons or lay up a canister of crumbs.

There was another way to avoid waste. Wanting the means for most other recreation, and rehearsing a possibility of old age, he tore the stale slices into strips and scraps and, like a much older person, tossed them from a park bench to the waiting birds. Several kinds pecked and squabbled on the ground, but the vast majority were starlings and pigeons. Once alien, in many places they had taken over the landscape.

J.D. Smith has published three collections of poetry, most recently Labor Day at Venice Beach (2012). His other books include the humor collection Notes of a Tourist on Planet Earth (2013), the essay collection Dowsing and Science (2011), and the children's picture book The Best Mariachi in the World. Smith is currently seeking a publisher for his short fiction collection "Transit," which includes this story. "Loaf" is Smith's second appearance in BULL: Men's Fiction.