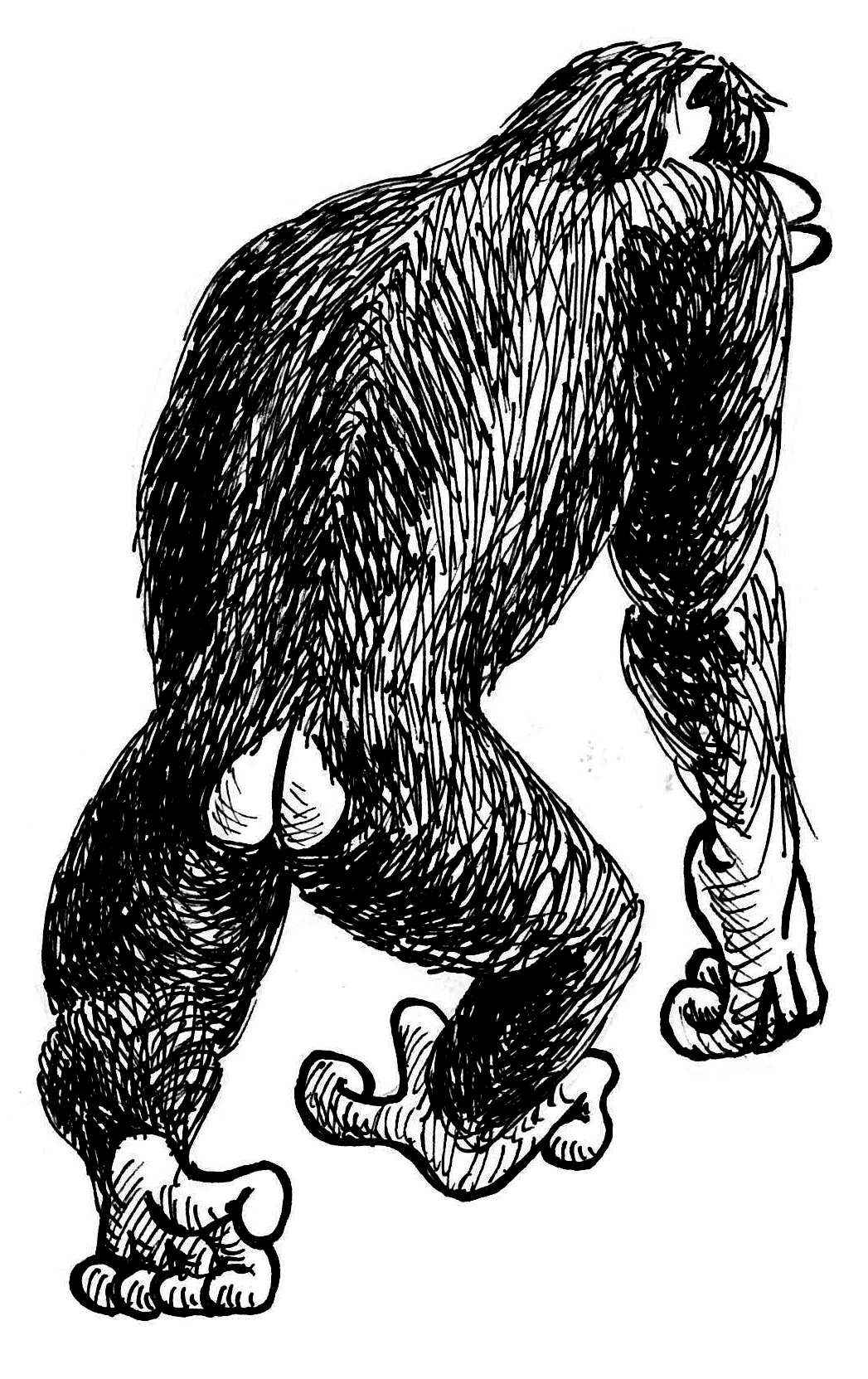 So I was sitting on the couch, scratching behind the dog’s second favorite ear and humming a song of woe over Constance leaving us, when the doorbell rang. Through the cracked door I saw a vaguely familiar monkey dressed in a tuxedo shirt and bow tie, cummerbund, but no pants. His arm clutched a circular hatbox.

But the monkey jammed the hatbox in the closing door and a hairy paw extended through the opening. This paw held a convincing replica of my wallet, so convincing it appeared to be one and the same.

Giuseppe, the organ grinder, dead. And this, his monkey.

He stepped inside, opened the hatbox and shimmied into an outfit of cutoff jean shorts held up by rainbow suspenders.  He folded the half-tuxedo neatly back into the box and stood upright, flaring a chest sunken and only spotted with fur. He was an old monkey.

“Where did you get this?” I said, searching through the wallet, finding myself staring back at me from my driver’s license. The dog circled, showing just a hint of teeth.

The monkey sighed. “Have you ever noticed how intently you argue with your girlfriend?  Or I should say, ex-girlfriend? How distracted you get by the hot flush of her cheeks?

“You never did feel the deft touch of my monkey paw as you watched her walk away.  Don’t feel bad, though, most don’t.”

“I hardly think that seven dollars is something to quibble over when one has been reunited with their wallet.” He snapped the latch closed on the hatbox and flipped on the television. Over the news anchor’s shoulder was a file picture of Giuseppe in his fez and fringed jacket, squeezing his accordion. In the picture, the monkey sat perched on his shoulder, grinning, mid-handclap.

The monkey looked at the TV. “Did you know,” he said, “that when an animal shows its teeth, that’s a sign of aggression? For some reason you people take it as smiling.”

The dog worked into a growl. The monkey shushed him, flashing the back of his paw. He removed a small steno-style notebook and pencil from the hatbox, licked the pencil tip and jotted a few things down. As the news bulletin ended, the monkey underlined the last bit of his entry and snapped the notebook shut before turning to face me.

“I want to prepare you for a couple of things,” he said, a replica of concern crossing his simian face. “The first is that it’s possible—nay, probable—check that, definite—that Constance has indeed moved on from your relationship.”
“And the second?” I asked.

“The second is that for reasons I could explain, but are not important, you may be considered a suspect in Giuseppe’s death. It’s possible that I have something to do with this, but don’t worry, we’ll get you out of it…

John Warner is the author of the novel, The Funny Man, as well as three other books you can buy for one cent on Amazon. He has been editorially involved with McSweeney’s Internet Tendency since 2003 and writes a weekly column as his alter ego, The Biblioracle, for the Chicago Tribune’s Printers Row book supplement. He currently teaches at the College of Charleston and lives in Mt. Pleasant, SC with his wife and the occasional palmetto bug that wanders in from the outside.