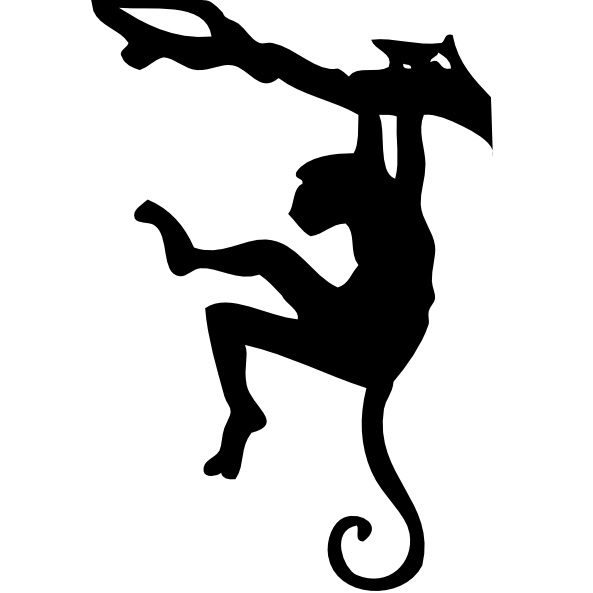 I am what I am, a monkey, and just because I have a reptilian inner core in my brain does not make me a lizard, just makes me think like one sometimes.  But I am all monkey—warm blooded, fragile, upright, thinking, and polygamous, very polygamous. I would kill all the competition if I had to for the heart of a female, and to keep a harem of more just like her.

Tonight I am sitting out on the grass of my apartment complex wishing I had a little black book of poems.  My wife threw me out, said I wasn’t a poet but some kind of a dog.  Might have been: You’re a dog, a fucking dog!, a real hot-dog, or nothing but a hound dog. Not sure which.

But out on this grass I take another swig of Corona, the only beer that leads me to believe that one day I might actually write a poem. I swig and watch a woman stroll the balcony of her apartment, admiring her posture, the way she stands so straight, erect, with attitude as she walks like the fine specimen of monkey she is.  And I sense tonight she has a lot of attitude, she is angry or depressed, otherwise impatient.  We, I think, this woman and I, are not patient creatures, but diligent, stubborn, determined, sometimes driven, anything but patient; patience is for lizards, which we are not, even if Carl Sagan thinks we are.

She walks to the edge of the balcony and looks down over the side.  I’m sure she can see me, so I yell to her.  “Just out here on the grass having a beer,” I yell. “Saturday night, warm, not much to do, care to come down and have one with me?”

She looks towards me in the dark, perhaps seeing nothing, only hearing my voice out in the darkness.  “I was considering killing myself,” she says into the dark. “Throwing myself right off of the balcony here. But maybe getting drunk would be a better solution.”

“You’re only on the second floor, you wouldn’t die anyway.  Probably just end up paralyzed, and then you couldn’t kill yourself if you wanted, unless you could figure out how to unplug the ventilator with your teeth.  So, yeah, might just as well come down here and share some beer under the moon with me.”

“So you’re suggesting I come down there and take in some of that moonshine, in the moonshine, with a stranger, with a strange manner, a man I’ve never met, don’t understand, don’t have a clue whether serial killer or not.”

“I am no killer,” I say, brandishing my beer sloshing warm in its bottle, “but a serial lover, my dear.  A lizard, or so says that science-twerp Sagan who claims I have the brain of one.  But he doesn’t know me, and if he did, he’d know I am a polygamous monkey, and neither lizard nor serial killer.”

“So,” she says, “I can be safe down there, in the dark on the grass with you?  I can drink my heartache away under the moon and the worst thing that could happen to me is I end up being polygamous with a monkey, not a lizard, even if Carl Sagan thinks you’re one, which you’re not?”

“Oh honey,” I say, “you are too cool, and you’re funny, and you have beautiful shoulders, and nothing to fear from the monkey king.”

“So you’re not just a monkey, but a monkey king?”

“Monkey king of Monkeyville,” I say, “my splendiferous, polygamous kingdom by the sea, where I take in the lonely damsels and I don’t mess around—for when I take them, I take them, and when I bed them, I own them.”

“Well then I’ll be right down,” she answers, and disappears to the back of the balcony where I hear the doorwall slide open and shut with a slam.  She is coming, and for a moment I worry about what to do. Maybe Sagan is right, perhaps, and I’m more lizard than king.

But in short time the apartment building door opens and she walks across the grass.  She is shorter than she appeared from below, but even more fetching as I trace her pert little nose turned up a bit and the dewdrop look of her deep brown eyes.  And I am in love instantly, lizard, monkey, dog—all of me—I am all three in love and very little else in Carl Sagan’s cosmos matters.  I get to my feet, yet as I try to speak out comes just a tiny, raspy sound.

She stops and I can feel her eyes give me the once over, but she doesn’t run, doesn’t do much of anything, just kind of looks at me. “Sarah Jane,” she says, “and I haven’t had a really good lay in about six years.  How would you like to stretch me out tonight? The doctor says it’s good for me.”

It cannot be happening, it is not happening, it can never be happening, that is, to me.  My ears have heard, but my mind does not accept. I’m not sure if I’ve ever had a really good lay, ever, not in thirty-six years.  But, as I have learned, everything changes, nothing stays the same, even lizard monkey dogs like me can be loved, or at least, the laws of large numbers being what they are, we can get lucky, at least once anyway—it’s a long life and I’m still young within it.

“Welcome to Monkeyville, as in Monkey-around-ville, my boudoir is right over here,” I say, pointing at the crumpled grass beneath my feet.  “I was just sitting out here thinking about which maiden I would have bathed in oil, perfumed, and brought to my tent. And then you arrived on your balcony, I looked up, saw you, was smitten, and now, am totally yours.”

I blab on endlessly, no idea what I’m saying.

“Yeah,” she says, “until the next time your majesty decides to imbibe on a Friday night and another fair maiden wanders off her balcony and across the grounds to your kingdom, your monkey kingdom.  You’re a polygamous, rat-sucking, lizard dog of a monkey king, just like my boyfriend, but I don’t care.  I just want something hot and stiff tonight, and I don’t care what all of the above I called you, or what you actually are, as long as you can make me forget everything for about six or seven seconds, which is about as long as paradise, or infinity, or orgasms ever really last.”

It comes from her very lips.  And what are the odds, I’m thinking, in a million lifetimes, a million galaxies, of the millions of atoms floating around in the universe of her, of the millions of miles and light years they all had to travel to reach my own drunken atoms on this Friday night, what is the chance of something like this happening to a menagerie like me.  And I’ll tell you—none.  So when I hold out my hand to her, expecting to whiff harder than I would at a Roger Clemens fastball, I am surprised to feel real flesh, soft, warm, perfumed, female-feeling flesh.  And when she drops my hand and puts her delicious arms attached to the magnificent shoulders around my neck and plunks her full, round, lipsticky lips against mine, I just might pass out from the glory, the thrill, the sheer impossibility of it all.

But I don’t.  I kiss back, and feel the heat like hydrogen roar out of her, the fusion, ignition, flames.  I have never stood in the fire and roasted like this before. I may well be swallowed into the pit of a black hole, sucked into a lightless vacuum where nothing could exist or ever would exist, or ever want to—it’s that good, that glorious.  It’s paradise if there ever was one, and at that moment there is, it is Monkeyville, and I, its king.

But why is it when good things are happening there’s always apprehension, some sinking feeling that goes along with good fortune, as if the moment could at any second unhappen, disappear into the empty darkness of the space we occupy? I kiss her anyway, uncaring that at any moment this lapse of reality could burst into fire like an Ohio Blue Tip match and combust.

When our lips finally part she pulls me towards the earth, trying to ground me, plant me right where I stand. “You have obviously kissed a woman before,” she says, and then, thoughtfully, “there’s a secret desire that all women want, which is to know that at the moment of a kiss they are alone among the stars with their lover, that no other light exists in his eyes but hers. You give me that feeling and therefore I open myself to you, whatever you wish of me, whatever you desire, you may have.”

I am not a king, a hero, nor anything but an underachieving shoe salesman with a master’s degree in particle physics, which may provide me with an understanding of the properties of the atom but cannot feed me at any level of existence along the Planck scale.

“No you don’t.  And I don’t expect or want you to.  I want you simply to walk with me back to my apartment and give me the same thing my pig of a boyfriend is getting tonight from someone else.”

“Yes, to the apartment, and paradise,” I tell her.

I don’t know what her boyfriend got tonight, but I swear I got it all.  This angel of the round shoulders, pert nose, and lambent brown eyes knew more tricks than any monkey on fifty feet of grapevine. Still, in the morning, when our eyes meet for the first time in sober daylight there is somehow the need to apologize.  “Sorry, I’m not even a monkey prince let alone a king.  I’m the kind of prince who when you kiss with your eyes open turns into a frog.  I do everything backwards.”

She gives a bright smile, cheerful, and winks.  “But I love frogs.  And now I’m hungry, so how about some breakfast?”

“What’s on the menu, bacon and eggs, hash browns?”

“Frog legs of course, what else,” my princess answers.

I thought she was kidding.  But damn if she doesn’t have a package of them, crusty and white and frostbitten from the freezer. And indeed we have frog legs, and champagne, for breakfast.

Time, I’ve been taught, moves only in one direction, forward.  So it did, and after some time in which I explain to her the universe, she explains unto me that her husband will be home shortly, he had been out of town but his plane was due in this morning.

“I thought you had a cheating boyfriend?” I say.

“I lied. I have a cheating husband,” she answers.  “But he is my husband; and cheating or not, he is a keeper.  So now you must be gone, and gone for good.”

Oh time, I thought, it may only move forward, but memories, yes, those sweet illusions, they can move in all directions, and I go back to them constantly and linger there much longer than I could in any paradise. And if life is but perception, the memories and other lies about what we think we are and were, then I—lizard, dog, frog or monkey king, I ask—is there really any difference?

DJ Swykert is a fiction writer living in northeast Michigan. His poetry and short fiction has appeared in publications from the Alpha Beat Press to ZZZ, including the Detroit News.  He has written several books, including Maggie Elizabeth Harrington, Alpha Wolves, and Children of the Enemy. He’s worked in logistics and law enforcement as a 911 operator. He can write a little and is pretty gabby.