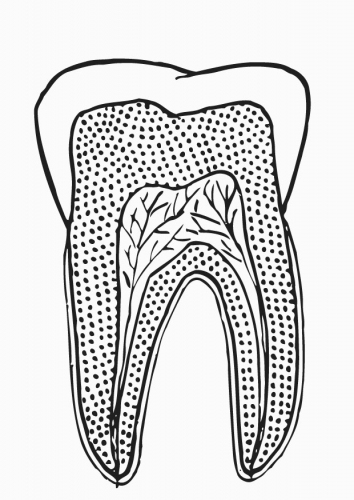 Pruitt had a disease in which his teeth slipped out like weeds, five molars in three and a half weeks.

He asked his doctor if he would die from the condition.

Maybe you should floss more, she said.

Are you suggesting that as my doctor or as my friend? he asked.

We’re not friends, she said.

Pruitt began drilling holes in the enamel and beading the teeth into a necklace and wearing the necklace to work. He noticed that his colleagues were more accommodating of him, resigning their parking spots so he wouldn’t have to walk farther than a few yards.

At the top of the hour, every hour, the copy boy brought him coffee. He didn’t need to ask.

His editor passed his cubicle, clapped him on the back. Did you know that the female praying mantis often bites the head off of its male counterpart during the mating process? he said. Also, my wife and I are renewing our vows this weekend and I want you there. Chicken or fish, take your pick, but I’ll need a decision by the end of the day.

Tech support crouched under his desk, ostensibly to check his router connection. He felt his shoe untie and wriggle free of his foot, his sock peel back. Underneath his desk the man was massaging his foot.

You looked tense, he said.

Is that coconut oil?

At the grocery store he nicked shopping carts with his doctor while walking to his car. He had never seen his doctor outside of the office before. She wore turquoise cowboy boots.

Your ice cream is melting, he said, pointing to the yellow puddle on the pavement.

It was always melting, she said.

He followed her car across town, to her condo, and they had sex. Afterward she shred tobacco fibers between her fingers, lit an antique calabash pipe.

Did you know that the female cockroach often bites the head off of its male counterpart during the mating process? she said.

I heard it was the praying mantis.

She set the pipe on her bedside table.

She drew a stethoscope from her pillow cover and rolled over. The cold metal sent tremors down his chest.

Any good? he said.

Nothing to write home about.

She went to the kitchen to fix him coffee.

He tongued the grooves along his gums, making sure that nothing had been left behind.