The Heart is a Strong Instrument 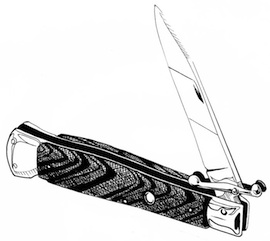 By Saturday the fad was already on the decline. It had reached its zenith on Thursday, when Jewlia_Looey_Dryfuss_38, on Letterman, threw a knife in the air and caught the blade in her mouth. Then twelve-year-olds started doing it, and Regis on his morning show, and if nothing evolved further, it wouldn’t have been more than a week before the whole thing got cheesy and fell into oblivion like so many other things had.

But at the time of the party that Friday, the fad was still current enough that none of us felt self-conscious about giving into it.

When we arrived that evening, the floor as usual belonged to my girlfriend, Janice_Bodiceripper. We were at Brian_M_325’s place, a condo he’d purchased from me two months earlier. Brian had used the interior decorator I’d recommended, and the result was something like a 1950s science-fiction torch lounge: skyline view and body-stockinged poster girls, mixed drinks and floor-to-ceiling mirrors, Spanish peanuts and smokes aplenty.

Janice seized the spotlight as soon as we walked through the door. It’s what I loved about her. She shimmied about the apartment’s living room, grinding her hips, showing off her belly and the sides of her waist. She’d brought her own knife and held the blade in her mouth like a pirate. All twenty-six eyes were upon her, waiting to see how far she’d go, how far she could go.

There’s only so much one could do in this world. With a body like hers, and in the three months I’d been with her, I’d just about seen and done all that I could. We’d hugged and kissed and I’d seen down her cleavage, but that was all. Janice’s performance now was pretty tame by our standards, so I aimed myself toward the kitchen for a beer. There was no talking to her when she was in the mood to entertain, and I wanted to check out what Brian had done with the cabinets. Being in real estate, I often found these things mattered.

I’d just plucked a Bud from the fridge when Karen_Loves_U69 walked into the kitchen.

Karen_Loves_U69: why aren’t u with janice?

Sometimes I thought Karen had a thing for me, the way she’d always show up at the parties and bars I went to, the same stores and live tutorials. It didn’t help that Janice often invited her, or told her where we’d be. Karen was a bore.

HouseGuy_42: getting a drink. want one?

HouseGuy_42: you’d know more than i would

Karen_Loves_U69: my life level is fine but if i don’t have to pay…

Karen was also a freeloader, didn’t pay for anything. Most freeloaders disappeared after a couple of weeks. There was only so much one could do without paying. Most people got bored–or quit once their life started to nosedive and they had to start working or searching for free food. But Karen kept on, a scavenger. I knew she’d never buy any property. She was a waste of my time. But I was too nice not to talk to her.

And most important, Janice liked her. She’d even invited Karen out to dinner once at our expense. That was the night Karen told us her husband had recently left her, only I couldn’t tell which life she was talking about. The way Janice consoled her and glorified me, it seemed like she was trying to set Karen and me up. A true mooch, Karen left right after the meal, but Janice and I stuck around.

Janice_Bodiceripper: next time u should ask for her phone number

HouseGuy_42: but i’m dating you

Janice_Bodiceripper: only for now. she seems to need somebody. maybe even irl

HouseGuy_42: i’d rather just date you

Janice was fun. Dating her was how I’d always imagined dating a stripper would be. She wasn’t a stripper, of course–that sort of thing wasn’t allowed here. But she came as close as she could: wet T-shirt contests, G-strings on the beach, mud wrestling. I kept hoping Janice would agree to meet in person, but she always put me off. I wondered if she had another boyfriend. She said no but was coy about it. It didn’t really seem possible given how much time we spent together.

One day, she kept saying.

Stealing was another thing not allowed, which meant free accounts couldn’t touch food or drink unless it was purchased or given to them. I opened the fridge, pulled out a Budweiser, and handed it to Karen.

Karen_Loves_U69: now i remember why i dont drink

I traded her Bud for a Corona.

I opened the fridge again and pulled out a little green orb. The graphics weren’t too sophisticated on it yet, a sign Sunkist still hadn’t paid for product placement. But it was a lime, and that was enough. I took out my pocketknife, quartered the lime, and handed her a chunk.

She meant the knife. I gave it to her, and she did as I expected: threw it over her head and caught the handle with her teeth. Nothing special. I’d have rather watched Janice.

The knife sunk into my heart.

Blood spurted from my chest like welding sparks. In the mirror I could see the gash and the blood running red down my shirt.

I was a successful man. I kept my life at a steady one hundred. The blood poured out of me onto the kitchen floor, and I fell to sixty-eight. I ran, or tried to run, into the living room…

READ THE REST
IN THE NEW
BULL NO. 1

Jon Morgan Davies is a native of California currently residing in Georgia and on the Internet. His work has appeared in such publications as Adirondack Review, Cutbank, and Southern Indiana Review. Read more at http://no1bag.angelfire.com.