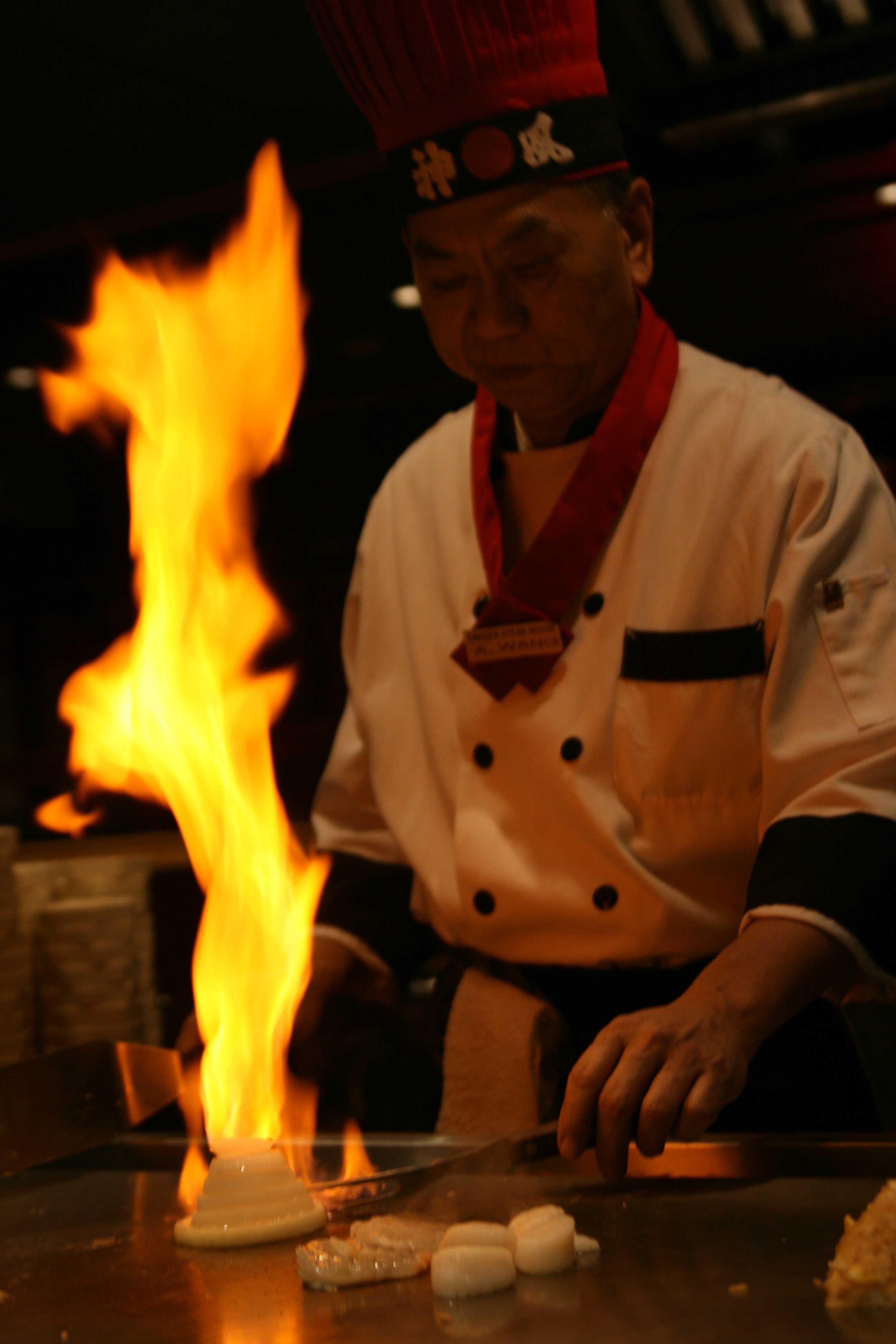 Disaster at the hibachi place. A kid pressed his hands on the grill. The chef cut himself bad. A curtain was on fire. My wife’s drink spilled. The bill included the tip. The salt water fish tank was dirty. A little girl was crying with gum in her hair. A homeless man asked for leftovers in the lobby.  I say, This is why I prefer to cook.

Daylight savings hadn’t ended and so the sun was still up in the parking lot. What a relief. There was so much left to do and I got a feeling like I used to have in my twenties that goes, let’s do this. It’s not necessarily a good feeling, but it’s stirring.

A friend once stayed in this motel and saw something darkly out his window he didn’t like. A drug deal, a theft, an assault, a murder. He clicked the lock then pushed the dresser in front of the door. The next morning he moved to a fancier hotel. That friend is not known to be particularly suspicious or paranoid or frightened easily or generally timid or some kind of bumpkin or a prude or a liar.  But we’re all getting older and more worried.

I say this because tonight there’s an art show at that same motel, each room a small gallery. The concept here isn’t too complicated. Some of the art has to just lay on the raggedy beds so you have to crane your neck a bit. They are selling beer and boiled peanuts. They are selling prints. The artists are proud and shy. There’s no threats that I can determine.  It’s all pleasantly quirky though I don’t want a birthday present from here. Last year, I used this day to bemoan what I had not accomplished more than a third of the way through my life, though hopefully not two thirds. This year, the math feels doomed again, no new accomplishments, but my mood has been stabilized.

There have been many breakthroughs. At least, I assume life expectancy is going up, but haven’t looked into it rigorously.  Once, I was on crutches on my birthday and got a good glimpse at old age. The kindness and the pity–I did give that homeless guy my leftovers. Now the midlife cliches are boringly abundant, the small aches and larger pains. Still, and I hesitate to say owed, but I have this feeling, birthday boy,  like I’m due for good news.

I did get a present from the art show. A print of our town square destroyed by Martians. I like the concept, the self-sabotage, especially having tried to park there and get to its bars on gameday and with all its meaningless undergrads. That’s cruel and jealous.  In the painting, no one is dying and neither am I.

Living with a Liar, a Killer

Our neighbors moved away but left their dog in the empty house. They sent us a message–could we let the dog out and feed it and occasionally throw it the ball. They’d be back Saturday. I mean, we had no choice. Animal lovers!

We have our own dog and he kind of hates the things he doesn’t know much about. Can you see where this is going?

Our son wasn’t home alone, he had his smartphone after school. We had passed the neighbor’s extortion on to him as a sort of happy chore, so he went to the neighbors’ house to tend to the dog, throw it a bone, what have you, the day was nice.

When my son texted me at work “dad come to the neighbors” I knew the dog was dead.

It was really brilliant what our neighbors had done—they knew we wouldn’t abide the idea of an  abandoned dog. Why they had left the dog was mysterious. It’s biggest detraction seemed to be that it was constantly thrilled. It had a white spot on its chest. It jumped high. It was only a puppy.

But the dog was indeed dead. My son was crying, cradling his beloved phone. Our own dog was barking through the fence. Some detective work was necessary. Had the dog suffered from some undiagnosed problem? Had the neighbors neglected its health? Perhaps my son played too rigorously? Were those bite marks on its neck?

My wife was calling me, then our son. We went back to the house.

My son has a big heart, and despite his insistence otherwise, I knew what happened. He brought our dog over to play and the neighbor’s, lonely and  thrilled as it probably was, was attacked. I could not say our own dog was incapable of this, though he slept between my wife and I every night.

Strangely, my son would not admit to this chain of events. He swore the dog simply tipped over and did not get back up. I told him what I knew had happened but he would not budge on his story. I told him I wasn’t mad. He said I was wrong.

Even more strangely, I cannot account for it, we didn’t tell my wife. When she asked if we checked on the neighbor’s dog, we declared we had. My son and I hadn’t planned this, but neither of us made a move towards the truth.

My son kept up the charade, going to the neighbors’ to see about the dog twice a day. I said nothing. Saturday, when the neighbors were supposed to return, came and went. No word. Our own dog lingered by the fence but no longer barked through it.

What is there to say about our family, my parenting here? The fact that I knew the dog was dead says a lot about my faith in our son, doesn’t it? Further, the idea that I needed very little convincing that our dog was a murderer says volumes about what I permit in my own house.

I dreamed that the neighbors’ dog was alive and panting. It was a happy dream, just some mistake on our part–we weren’t, like, veterinarians. But, no, here was the gray morning with only our own bloodthirsty dog whining to go out.  Was the neighbors’ dog beginning to smell? The house had been sold and new neighbors, perhaps with–gasp!–their own dog, were inevitable.

There was also the problem of my son.

Sean Ennis is the author of Chase Us: Stories (Little A), and his fiction has appeared in Tin House, Passges North, Hobart, F(r)iction, and The Adroit Journal. More of his work can be found at seanennis.net

Photograph by Quinn Dombrowski via Flcker.com.

← The Invitation
Mermaid and Seaworm →