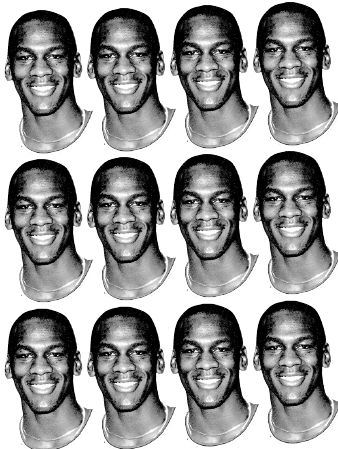 Fifty seven perish before their first birthday. Each one is cremated. The smoke is pumped out the garbage chute into a South Dakota sky dotted with circling birds of prey. They smell the flesh but find no food below them, only dust and plastic cups.

Two hundred feet below, the remaining Michael Jordans are raised, trained daily to leap higher, to run faster, to out fight each other in an arena decorated with posters of their namesake. The walls are wallpapered with his smiling face and photos of his championship rings. He is always leaping, forever leaping towards something greater than they can imagine. Three more are found dead in their sleep on the eve of their third birthday. They share this birthday with their namesake, along with his genes and his smile and his love for baseball. This remains inexplicable to their trainers and the researchers living deep down in the soil. These Michael Jordans are not meant to see a baseball game. They will not have shoes made in their honor. They wear his in every waking moment. Their bodies are just an impression made of flesh, pressed out in petri dishes.

Each day the Michael Jordans are lined up against a white wall in the bottom of the facility, this pale submarine forever anchored in the belly of an under populated state. They call this place JRJ, named after Michael Jordan’s father. It is an incubator, a place to start again, start one hundred times until the pieces fit, until the perfect form is found. The small forward and the shooting guard united into one holy and unstoppable titan—a defensive player of the century.

Six more die after two thousand days outside their artificial wombs. They keel over in the cafeteria, six faces planted deeply into neverending bowls of Wheaties. Supplies are dropped down a shaft like the garbage chute. It leads nowhere. The bodies are cremated again. The Wheaties are tested and tested again. No one argues with this diet. Champions have been born beneath the earth, inside this ore rich soil. One researcher suggests they should have conducted this experiment in North Carolina. He is stripped of his badge and summoned to the surface.

The soundtrack to Space Jam echoes through the white submarine as the Michael Jordans are lined up again to be measured. Each one wears a white Hanes shirt, firmly pressed and ironed every morning. All the clothing here is Hanes. On Sundays, the shirts are tucked into blue jeans brought all the way from California. Sundays there are no practices and no fights. The researchers believe in nature, but nurture still haunts their dreams, follows them to small white rooms where pictures of their ex-wives and husbands linger to remind them of failure. They eat their Wheaties before sleeping and trying not to dream about R.Kelly and Bugs Bunny. They try not to remember sunlight and the taste of Cheerios. They try to tell themselves this is the future, this is where eagles soar. No one asks why Bill Murray is in Space Jam. He is their saving grace.

Eighteen Michael Jordans pass away in the middle of the night, smothered by one of the head administrators who claims he could not watch them anymore. Even their eyes flicker in the same way when the lights come on, he says. Even their feet all stretch out of the bed in the same moment, the same second if you look close enough. The line against the wall grows smaller, the pool shrinking. They need bigger shoes, but the funding is drying up. A new administration has lost interest in basketball, found a new dream out in Boston. Football and the new face of America. The Wheaties don’t taste quite the same, and the Michael Jordans have begun to notice the difference. They are fed sleeping pills at night and no one is sure if they are colourblind. Everything is red and white beneath the surface. Nobody can describe green to anybody else.

Three more suffer epileptic seizures during a viewing of the Chicago Bulls ‘93-94 season. Their bodies cannot handle the lack of Jordan on the court, even with a winning record. The remaining Michael Jordans are hustled away and kept in the dark until the three bodies are disposed of quietly by the remaining staff. The Air Jordans have run out and food is becoming scarce. No one’s shoes fit anymore and the Michael Jordans have begun to ask questions. They all want to meet Muggsy Bogues and shake his hand.  They all want to see Chicago.

Eight more are slaughtered after the Michael Jordans learn to play cards. The researchers huddle in their booths as games of chance go awry, as each gene they’ve sorted plays out a drama already rehearsed, rehashed, rereleased in a newer, compact form. The Michael Jordans call each other nicknames. They refuse to answer to Michael Jordans. They let their Hanes shirts grow wrinkly and twisted.  They grow mustaches and refuse to trim them. They find two trainers in the gym and batter them to death with limited edition Spalding basketballs from ’92. The technicians and remaining members of the research team attempt to flee to the surface of this place. Three of them are blind. Two will never walk again on the surface of the earth. Each Michael Jordan has mutated, they wail at one another. Each one has changed, somewhere they can’t see, something they can’t chart. Someone tosses blame at a lack of funding, but the charges don’t ring true. This was something wrong in the foundation, a forgotten fracture in their math.

The last abandoned Michael Jordans try to climb up the garbage chute to escape the smell of their rotting photocopies. Three get stuck, tangled up in torn basket mesh and broken smoothie-maker wires. Once they reach the surface, one of the last two Michael Jordan’s chases the sun across the sky, screaming for it to come back, to take him to Chicago. His shirt is tossed out into the wind, but that night he dies from exposure to the elements. South Dakota is colder than anyone remembers. No one can hear you calling for some Gatorade, for another white towel. The birds find him in the morning, but there is no sign of another Michael Jordan.

The last Michael Jordan has learned to run. He has run every single day of his life with faces just like his breathing down his neck. He will always be running, always attempting to catch his breath, to reach beyond his grasp. Michael Jordan will always be searching for a safer place to stand, to settle, to find that perfect release. It’s all in the wrist, he will say to a kid shooting hoops outside a hut on the coast of Honduras, where he will only stay for six days before they find him.

He will release the ball and watch it fall through a meshless basket.

GET THIS AND MORE IN THE NEW BULL #3.

Andrew F. Sullivan was born in Peterborough, Ontario. His debut short story collection 'All We Want is Everything' is forthcoming from Arbeiter Ring Publishing in Spring 2013. Sullivan's fiction publications include work in Joyland, EVENT, Little Fiction, Grain and Dragnet Magazine. Sullivan no longer works in a warehouse. Find him here.

← A Life on the Road
BULLshot: Andrew Sullivan →