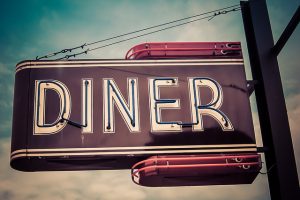 We were tucked away in a shabby strip center eating chicken fried steak when I got the news. Neon from the “DINER” sign glowed turquoise and bright pink under a small troupe of stars. The waitress had just given us our coffee. She was thin and pale, and her Russian accent contrasted with the rest of the diner. Grabbing the spoon to scoop in the sugar, a contorted version of my face stared at me from beneath its surface. The jaw was refracted, the top half compressed and elongated.

“How serious is it?” I asked. Dad looked down instead of answering.

I tried to dry the rims of my eyes by watching small spirals of coffee-cup steam twist through the air.

The two of us sat like that for a while, suspended in silence. He asked if I wanted to go see her next week. Forgetting the taste, I sipped my coffee, trying to buy more time to consider. It had been years. I didn’t even speak Spanish anymore, and Google Translate wasn’t accurate enough to say what I needed to. I was a stranger. Dad must have seen my shoulders stiffen, or read into how I crossed my arms, because he immediately dropped the subject and said he’d call me.

We signaled the waitress for our check. After seeing us, the smile she wore slowly folded downwards.

I was stuck at an intersection on my way to work. Right as the light flashed green, a truck tried going around me. I felt the crunch of steel on steel and plastic on plastic. They tried reversing to pull their grille out of my passenger-door, but that only dragged it across my backdoor. My windows wouldn’t roll down so I pointed to a nearby parking lot. The left half of my car was smeared with dents and covered in pearl-white paint.

I stared at the metal folding into itself. Its wrinkled texture reminded me of my grandma, and how I still hadn’t gone to see her.

The asshole came and stood next to me. He said “It’s no biggie, yours wasn’t too nice to begin with.” I grabbed him by the shoulder as he turned to look for his paperwork.

His fist sent my body into the car next to us. A stiff, sore feeling expanded from the nose to the rest of the face. Drips of vibrant crimson free-fell into my palm. I got up as he was turned around, explaining himself to the passersby who had started filming.

Crisp air pours through the sunroof. The way there is wide and empty and open, endless. It’s the big green house on the corner, with white trimming and a station wagon in the driveway. Chipped paint dots its teal surface and the wood-paneled sides are cracked, but it’s just like I remember it.

Her garden still winds to the front door. Soft gold dahlias with burning crimson tips, a bundle of bone-white lilies and towering cacti scattered throughout. Somewhere above me a bird sings something ingenious. I spit a wad of bright red into a rosebush and walk forward.

M.C. Zendejas is a fiction writer from Texas. He is currently studying creative writing at the University of Houston. His work is featured or forthcoming in Z Publishing's anthology: Texas's Best Emerging Poets, Contemporary Collective Magazine, X-R-A-Y, and Your Impossible Voice. He likes candy corn, museums, and slamming brutal death metal.