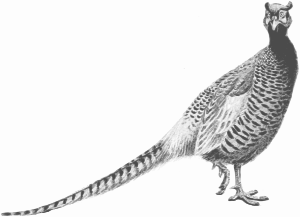 Skip knocked on the cabin door. Didn’t get an answer. Walked right in. The place was as he remembered it. Stuffed with stuffed animals. Birds and foxes on fake wood perches. Deer heads hovering over the wood-burning stove. Largemouth bass in exaggerated poses of high drama. A stink hung in the air like a chandelier. It was Martin.

He was in front of the TV. But the TV wasn’t on. He was leaned back in a recliner, his hair spread out long and greasy around his balding head like a funky halo. He had a beard now.

Martin looked at him and smiled. “I am home.” His teeth gleamed. Those perfectly straight, perfectly white, perfectly perfect teeth, alabaster marvels in the midst of his foulness. White as china. White as paper. White as Sherwin-Williams high gloss. If he’d spent less money on those goddamned teeth maybe he wouldn’t be in this mess.

“You don’t get to just leave,” Skip said.

“It doesn’t fit me anymore.” Martin snapped down the recliner. Tossed his hair back like a fashion model. He scooped two dripping cold beers out of a white Styrofoam cooler and went foraging around in a sideboard cabinet until he found two familiar coozies decaled with pictures of pheasants in mid-flight. They’d always called them piss-ants. A joke they used to think was funny once upon a time. Martin slid the beer cans into the twin coozies. Twirled them in his palms like revolvers. Gave a follow me motion with his head.

Outside they knocked dead leaves and pecan husks from lawn chairs and sat on the deck. A small hill led down to the fishing pond where Skip had caught his first fish, gigged his first frog, met his first cottonmouth. Martin spread out his arms and helicoptered his torso from side to side. “Make me an offer.”

“No. Without the trees. Of course with the trees, dummy.”

“Sold.” Martin looked down at the deck planks and picked up two loaded pecan shells nestled in a seam. He squeezed them until one cracked against the other. Flecked off the tiny armor plates of shell with his thumb to get to the nut. Martin claimed his daddy used to sit in blinds and shoot BB guns at the poor folks trying to steal all his yard nuts.

“Want to go fishing?” Martin asked, and chewed the pecan in his glowing teeth.

Of course he wanted to go fishing.

Martin had a johnboat with a trolling motor, and they puttered around in the pond searching for the big one until it got dark. Martin said he had some quail in the freezer and would love it if Skip stayed for supper. So Skip stayed for supper, and they emptied a box of grits into a big black pot, threw in some cream cheese, and wrapped the quail in bacon before slapping them on the grill. They sat on the deck and drank beer and nibbled all the meat off those tiny bird bones and dug their spoons directly into the black pot of cheese grits. Late in the night, Skip’s cell phone started vibrating. It was Janet. She kept calling and calling. So Skip shut it off.

The next morning Skip woke up with a powerful headache. He walked out on the deck and saw Martin in the pond, naked, the water just below his hips.

“Come on in,” Martin shouted.

“You’ve never been good at anything.”

Maybe a dip would help his head. He stripped to his briefs and ran down to the pond, cannonballed off the dock into the surprisingly warm autumn water.

When he came up, a wet piece of mud slapped him in the face. Martin had hurled a wad of sludge at him. He turned around to show Skip his back.

A mud bath. Maybe that explained his stink.

Skip reached to the sludgy pond floor and scooped up a handful of muck. Hurled it at Martin. He arched his back and let out a howl. So Skip did it again. Soon they were both spackled with mud. They laid out on the dock, far enough away from each other as to not feel queer, and let the mud calcify into a crusty skin.

Soon Skip felt shade darken his closed eyelids and a coolness settle on him, like a heavy cloud moving over the sun. He opened his eyes. Martin loomed over him in all his naked mud-striped glory.

“You want Janet?” he asked.

“I don’t know what you’re talking about.”

Martin nudged Skip with his big toe. “You give up too easy. Like always.”

Martin jumped off the dock, turning a goofy somersault into the water. He stayed under for a long time. Skip wondered if he’d hurt himself. Landed on an unseen stump and broke his neck. But soon he was back again, spitting nasty pond water into the morning air.

Skip borrowed a pair of Martin’s dry boxers—clean ones, he promised—and they went fishing again. But it wasn’t the same.

Just before dark Skip said he had to head back. They stood outside Skip’s car with the door open. Martin put a hand on Skip’s shoulder and squeezed. “We do the best we can with what we’ve got,” he said.

But Skip knew he could do better, so he balled up his fist and popped Martin right in the nose, stunned him with a jab. Martin blinked and wobbled on his heels. Sneezed. Laughed. Teeth shining. If he hadn’t laughed that might’ve been the end of it. But he’d always thought too little of Skip. He tried to hit him again, but Martin ducked and took off running. Skip chased him around the side of the cabin. At one time Martin had been faster. Not today. Not anymore. Skip caught him by the back of his shirt and pulled him down in a horse collar tackle. Martin cackled like a lunatic, making everything worse.

So Skip grabbed a wet wedge of wood from the wood pile pyramid and cracked Martin square in his teeth, knocked a nugget clear out of his mouth. That got his attention, but still he kept laughing. So Skip hit him with the wood until he stopped.

Janet answered her door in a long men’s robe, red and black plaid. She wore ratty fur slippers on her feet, matted and gray, the fur sticking together in spots like a wet rabbit. She shuffled into the kitchen and Skip followed. The robe covered her whole body, not even a bare ankle to admire. It must’ve been Martin’s. He’d hoped she’d be wearing a sports bra. Yoga pants at least.

She sat down at their kitchen table, a long piece of reclaimed wood, like something from a shipwreck. He’d left Martin in the back of the car, but he wasn’t ready to tell her that just yet.

She waved a limp arm at the fridge, help yourself.

Skip found a brown bottle hiding behind a gallon of soy milk, the same shit-ass beer they’d been drinking at the cabin. He twisted the cap and swigged.

Skip kept the bottle to his lips.

Skip drank slowly, curling the cold beer around his cheek and tongue, warming it, bubbling it up until it stung and he had to swallow. He leaned against the concrete countertop and took another swig. Janet had started the dishwasher before he’d gotten there and it was wooshing warm air against his leg. The kids had crude pictures they’d drawn and colored pinned on a bulletin board on the pantry door, and under a yellow thumb tack was a picture of Janet and Martin with backpacks on, both of them smiling like they’d saved the world by taking a hike.

“I’ve got to pee,” he said. He set his beer on the countertop and hurried down the hallway toward the master bedroom and bath. He knew the way. He turned on the shower. Felt the white, fluffy towels hanging on their respective hooks. Smelled the lotions they kept on either side of their dual vanity. He took off his clothes and stood in front of the fogging mirror in his friend’s boxers. Martin’s toothbrush would be the dry one.

Jeremy T. Wilson is a former winner of The Chicago Tribune’s Nelson Algren Award for short fiction. His stories have appeared or are forthcoming in literary magazines such as The Carolina Quarterly, Fifth Wednesday Journal Plus, The Florida Review, Hobart, Third Coast and other publications. He holds an MFA from Northwestern University and teaches creative writing at The Chicago High School for the Arts.
← Curable by Marriage
We’d Be Soldiers →