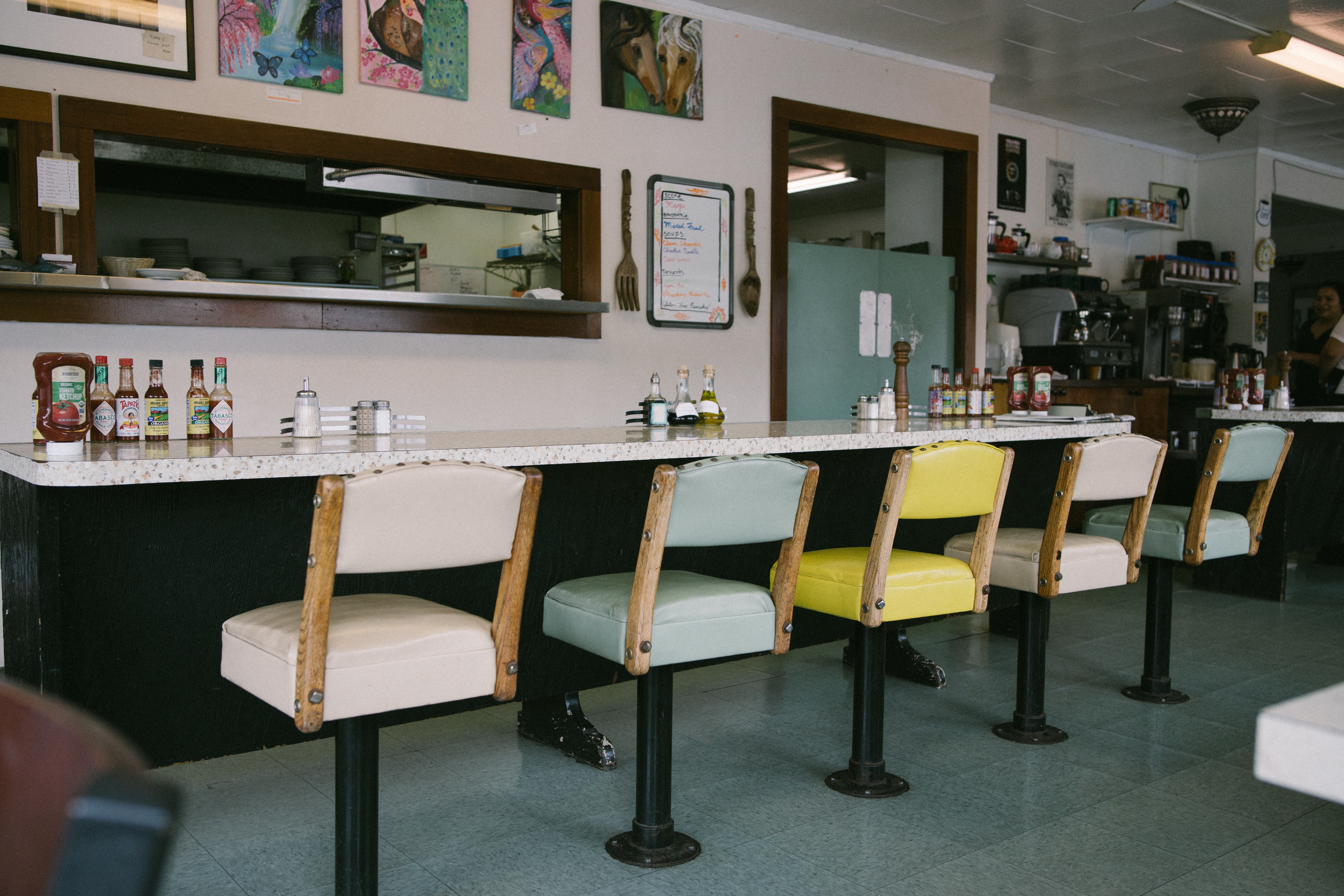 Wilbur Merit, commonly known as Porkchop, earned his living scrubbing dishes at a Yellowstone Park restaurant that locals called “The Mistake on the Lake.” Porkchop, who was bigger than a bread box and perhaps even a bread truck, had long, stringy black hair and a brambly beard that stayed filled with sprigs of salad, tangles of turkey, cocktails of condiments, and indescribable globs of biological matter purported by some to be chicken cordon bleu. Although he was damned to the dishroom due to a countenance not fit for human consumption, many residents of Yellowstone County considered him an awakened one, a burger eating, beer guzzling, belching Bodhisattva.

At present, Porkchop was scouring the remnants of a burned brown sauce from an industrial-sized pan using elbow grease and steel wool. He wished the cooks would pay more attention, but they were probably a bit too over-Thorazined to care. So he just shrugged his shoulders and continued to scrub and rub. This was, after all, a tiny matter in the great cosmic scheme of the Sentient Hum; and Porkchop would not lose sight of the fact that he lived a good life in a beautiful place, and that his occupation kept him grounded.

Whenever he was not washing dishes, Porkchop was writing stories, though he considered plot to be nothing more than artifice, a silly convention taught in high school by well-meaning English teachers who drew steep mountains on the chalkboard and labeled them with nonsense such as “Rising Action,” “Climax,” and “Denouement,” a word he found unbearably pretentious. Life was nothing like that. Most people repeated the same tasks over and over day after day. They got up. They went to work. They came home. If a publisher wanted realism, that was as real as it gets. Life was more about cycles than linear, or even alpine, developments. And what was the climax of his average day? Lunch?

Some of the editors who had rejected him called his stories “slice of life,” a term he disliked because it made his work sound like pizza, but he did find slice of life pieces to be closer to the true nature of existence than stories with plots. In the end, seeing that he had papered an entire cabin wall with rejection slips, he decided to try his hand at plot. So he said sayonara to realism and started writing science fiction. The way he figured, if he was going to employ the artifice of plot, he’d might as well do it in a genre established on artifice.

His first attempt was a short story about a kind, mild-mannered scientist who was trying to recreate the Big Bang in his laboratory. The story included references to Copernicus and Galileo and their belief that Earth, contrary to popular misconception, was not the center of the universe. The scientist, a short, bespectacled man in a long white coat, spent much of the story lamenting about the narcissism of the human race. Ironically, the humble scientist managed to recreate the Big Bang, and for a split-second he was the center of the universe. Then the whole universe was reborn, consuming his body and expanding ever outward. To Porkchop’s glowing satisfaction, a little sci-fi magazine in Reykjavik published that little gem.

Then Porkchop wrote a story about an intergalactic summit where creatures from around the universe met to discuss peace, harmony, and symbiotic enterprises designed to improve the lives of all beings in the broad expanses of space. At the time, many of the planets and even galaxies were at war with one another, and the future of life in the universe was unsure. But instead of talking about war and peace, the intergalactic ambassadors stood around joking about their various reproductive organs and where they were located on their bodies, causing everyone to laugh so hard they nearly burst their spleens or whatever equivalent organ they might have had. After that, they also laughed mightily as each ambassador flatulated from whatever orifice, tentacle, or gelatinous membrane his, her, or his-her species used for that purpose. The revelry caused the ambassadors to reach the epiphany that all creatures are basically the same, and the great, majestic universe was essentially saved by methane jokes. Although Porkchop never found a home for this story, he was sure its day would come.

In the sanctity of the dishroom, Porkchop loaded a rack of dinner plates into the shiny metal washer. Steam rose as the machine clacked and clattered, and the sound of powerful torrents of rushing water came from inside the big stainless-steel washer. Porkchop, who did not eat the flesh of the cloven hoofed, always found it amusing that his friends called him Porkchop because they said it looked like he combed his hair with one. In reality, the humidity of the dishroom, which rivaled that of Borneo or Papua New Guinea, caused his hair to constantly lay flat. But irony was part of his game, so he answered to the nickname with a certain jolly pride. Having the opportunity to contemplate such notions was one of the reasons he worked in the dishroom. It gave him ample time for reflection. After so many years, the dishroom felt oddly like a sanctuary.

Porkchop raised his hairy arm and checked his Smokey the Bear wristwatch. His shift was now over. He pulled his white plastic apron over his head and placed it on the hook beside the sink. He then punched out, said happy trails to his colleagues, and moseyed out the door. Standing on the loading dock, he smiled at the sight of the Absaroka Mountains, whose image was reflected upon the shimmering lake. He then strolled down a path through a stand of lodgepole pines toward the employee chow hall, where he would gobble down a bacon cheeseburger, saunter back to his cabin, and pound out the first draft of a story about a raucous interstellar bacchanal. And tomorrow he would rise, and it would start all over again.

Heath Dollar is the author of Waylon County: Texas Stories. He is the winner of the Texas Observer Short Story Contest and was named a finalist for the Kay Cattarulla Award for Best Short Story by the Texas Institute of Letters. Dollar has lived in both Europe and Asia, and his work as the lyricist and frontman for a blues-rock band was released on a Prague record label.

Photo by adrian on Unsplash

← Three AM, February 26th
The Greatest Quarterback Who Ever Lived Only Played Three Quarters in the NFL →