The Champion & the Louse 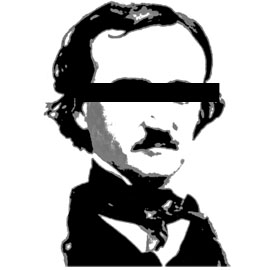 FALSE! this is me, merely me—sad, perverse, me. You, too—oh yes you, winking emoticon—for certain have felt what I’ve felt and browsed where I’ve browsed. Yet if I were to spy on your Facebook page and sift through your photos, you’d stare back at me in every one of them, smiling: “I am not like you!” Well you are! It is the human impulse; it is our one and only truth. We either bow our heads or puff our chests—these are not the times for intermediacy. You leap and expose your heart, or you stand forever still the beating dunce.

Or perhaps you already understand. Perhaps you have accepted me among your ranks—a brother of the soul, a father of all thought. You have me listed on your phone as “The Philosopher, My Dearest Friend.” Oh, I’d be flattered to hear it! But I know more than to expect it from you, spiteful reader. You will, at every move, judge. You will, at every move, expect these feet to dance, these hands to clap. You will wrangle me to screw my eyes into little beams of joy and smile! All so I can sell you a mirror? Well, I’ll do it! I’ll perform for you, take my pause and answer your questions. But why all the drama, you ask? For so much, you’ll see, so very much can depend on the smallest of moments. A minute can make a man worm for the rest of his life; the slightest chip spoils the castle. There! I stick my tongue out at you and your questions! ;-)>

How, then, should I start such a sorry little thing? How to convince you that what happened on that day was necessary? For my… my…—suffer my wavering; I’ll say it as it is—for my becoming a true and complete man!

I begin with her, of course. All life, beautiful spring, grows in bundles already entwined. And so my sordid account will begin: Her. But she is so much… no, no! by no means is she obese. Ha! What I meant to say is simpler than that: I could slavishly devote myself to describing any part of her minutely. It would be best, then, to start with my favorite part: her left eye. (Why not her right, you ask? I can only bear these interruptions so much longer. They are bright screens flashing in the middle of a film. Her right eye lies below her side-swept bangs. You cannot embrace its terrible beauty so much as its twin counterpart.)

A lovely emerald like it you’ve never seen before. Zoomed in upon your computer screen, you can see all of its tremulous intensity. It has little lines of brown spreading out, eagles in flight from the pupil. You could say the gemstone has been unearthed for the first time, so many kisses of beautiful brown dirt remain. And here—I’m pointing though you can’t see my screen—is a stunning ring of black surrounding her iris. Yet what does this eye have to do with the story? Can I move this along, you ask me? Then I’ll spare you talk of her softly wrinkled elbows. We’ll begin at the office.

Although she worked on a different floor than me, we entered the building always at the same time. Every smile thrown my way reciprocated a larger smile of my own. Eventually, after so many smiles, we began to—timidly—talk. From then on, eagerly so I would listen to her chatter weather and current events. For an entire year I endured the sacrifice love requires—I listened to talk about Lindsay Lohan. For an entire year, I mustered up the courage needed to invite her to eat dinner with me, the hungry fool. Then, to my great surprise, I asked one day and she agreed to go! To the Cheesecake Factory! And blithely so! Oh sweet felicity… yours is a name I’ll never miss!

But I’ll skip that first meal; the Cheesecake Factory we often visited. There is where I split my heart in two in front of her and asked her to be my darling. There is where the happiest day of my sour life took place. There is where the waiter, little mouse, put a candle on her cake and sang her a tuneless tune. And there is where this tragedy should begin. Don’t you agree? Oh yes, there is my absolute beginning! Yet I’ll keep in everything I’ve written just to spite you. So grievous your insult; I have no compulsion to spare you.

True, on this day, the beginning of the rest of my life, I asked my darling if, at this tender night’s end, she’d return to my apartment. For a drink, for a film, for anything besides what I secretly desired. She had just taken a dainty bite of her SkinnyLicious® Herb-Crusted Salmon when the question sweetly dropped on its knees in front of her, eyes pleading for an answer. But wait! Let me not spoil the moment for you. I will show you how cunningly I cornered the poor girl, how I made grim excuses, mere jokes, and finally wrenched the words from her mouth. I will show you my talent—I will show you why she said yes, yes!

Over the table I surely whispered words like these: “Hearken, dear woman! Now is the time the moon splits seas. The tide has crumbled the dam and the swimmers have drowned. Won’t you float into my strong arms? Won’t you dearly come with me?”

“Oh, but listen to yourself, love’s love. A life is worthy of having despite the shadows sleep, the shadows of death. Take my hand, draped beauty”—she was wearing a dress, I believe—“and our path will be scarcely lit by the trembling, staggering stars, but still we will bravely bold cross these winding stairs, this desperate life!”

My darling sighed, “How about tomorrow?”

A false beginning—true! But all stories have one. Our actual conversation, do mind, may have varied. But what does the path matter if the result is the same? What does it matter if the petite dove flew south or east? She is still the dove, lovely little innocent dove. She said yes to me—yes is all that matters.

In that moment I did not fly into a gleeful mania as you, untutored psychologist, may think. At once I fell into a rage. I flew into a panic. And yet, I’m loathe to describe why this was so! For I must begin to describe my apartment, the filth, the dross—and that stench! How long it took to clean that stench! So many hours I spent running up and down three flights of stairs, trash bags in hand. I drowned my couch in cleaning products and still the stains prevailed. I emptied my fetid refrigerator of its rotting contents and wiped its crusted shelves. New plates were to be bought, and my brown rug vacuumed several times. Fate’s cold hand even forced me to move the television to an awkward place in the living room to hide a tear in the carpet!

But I cannot stop there, can I? After so much torturous labor, I would have to skim over the few delightful minutes I savored once the room was clean before she arrived. When detailing our sweet time together, I would have to reduce our many ebullient moments to a single wink, a single smile. All for context? All for the next morning, the true beginning of the story? Why exhaust pages only to tell you how blissfully I slept—and slept not 😉 — that night? I might as well dedicate a paragraph to my father’s dearest memory, to my mother’s most cherished doll. After all, the night between lovers… isn’t it as useless to this story as the whole history of us, the people?

What could I do? How could I change the fate that awaited me? I stood there dumbly gawking at the girl as my stomach ached, my throat dried. Shaking, I wondered what horrid things she had seen. Oh, how very long I had fought for her affections! My yearlong campaign—a massacre, a war—battled and lost all because of a careless mistake. It did not matter—no, no. She was no more. No more!

With enough attention, I could almost hear the machine grin. I wished more than anything to lunge at it or to throw it against the wall or heave it out of the window—hurt it, destroy it, obliterate it. Do anything but have it sit in front of her, taunting me! I yearned so very much to relieve the dread I felt sinking my chest. I wanted to bite at my knees, spin in circles, leap through the air, scream. Instead, though, I said, loud-voiced and smiling, “Good morning!”

Those eyes! She knew! A great actress, her? Oh no, no, no, very much no. She had the looks for the role, yes. Of course. And she presented herself so convincingly. Her posture mimicked her words, her face was relaxed, her smile held no malice. But her eyes! No audience could be fooled by this little actress, never. Where she merely acted happy and innocent, her eyes told it all. How disgusted she was, how very low she thought of me!

If I could have spat acid!

The woman returned to the screen and her giggles. I too, laughed as I caressed her back on my way to the kitchen. Once she could not see my face, though, I could feel my eyes grow wider and my lips tremble. Hushed, trying in earnest to hear her breathing, I poured myself cereal, sat in the kitchen and ate. Only the long, terrifying silence accompanied me as I gazed forward. What plots were hiding behind the seemingly smiling eyes? What cutting schemes masked behind her vacuous expression? Would she reveal it to me slyly as she was walking out? Would she call me later that day with an excuse? An e-mail? A text? How would she end our joy? When would she end this perfect union? I could feel her thoughts, her beating thoughts, I could hear them as the wings of a bee hovering nearby. Louder they grew, intolerable!

“Angel!” I cried, “I confess it!” I rushed over, dropped at once to my knees and placed my sweaty hand over hers, surely made of stone. Together, we moused to the wretched gallery of my history, my bookmarks, my guilt. Nervous ticks and cracks escaped my throat with every new page—of the obscene, the disgusting, the physically staggering. Oh, I can hardly bear to describe it! Shining women shaped like pearls, dirtying their luster, the camera eagerly eating their disgrace; strong, steeled men caring not for the shame of their mothers, conducting themselves with a primal aggression! Oh, how the couples devoured each other, flames consuming flames! How grossly, how ecstatically, how quickly they dissolved into sinews and sweat. And the shouting! Each tab, each window poured forth a cacophony from my speakers. With trembling lips I watched in awe a generation of men and women burying themselves in rotting soil. “This!” I shrieked. “I own myself to all of this! I admit it! I admit it!”

The woman indeed left me. But later that night, alone, and with my vices sprawled out as they were, I felt positive I could overcome them. Today! I shouted, Today is the day! Do you see, then, why it must have been done? No, I was not mad—not at all. I was growing! And have grown and will grow, the strength and resolve and the will of a champion. A new man! One that, with effort enough and charm, could win any woman. Any woman!

GET THIS AND MUCH MORE

Armantin Varona is twenty-one years old and is noticing a curious trend: life gets better. About to graduate from college, he hopes he is not proven wrong.