The G. I. Joe Christmas 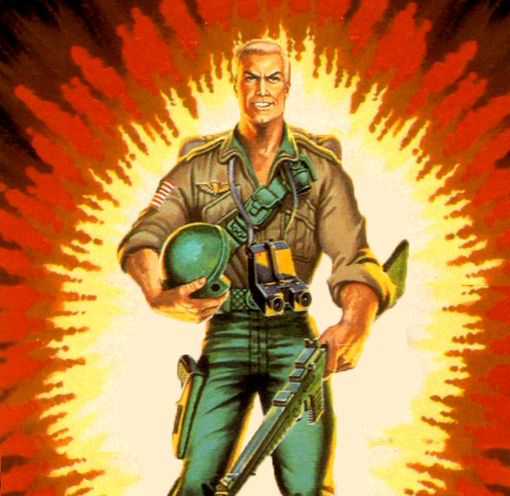 My favorite uncle gave me my first G. I. Joe for Christmas just before he went into the Air Force. My cousin, Lisa, had Barbies but no boy I knew would call a G. I. Joe a doll. My Joe had the standard burr cut and it felt as if Hasbro had used real hair for his head and heavy beard. He wore green camo and combat boots. When you pulled the gray medallion that sprouted out of his chest he said he was ready for action. He said other things too like, “We must hold this position. Take it!” And, if I remember right, the sound of machine gun fire soon followed. It was a different time. A boy was expected to imagine war and killing his enemies. He was expected to fight with his fists to prove he was tough and since the war was “as seen on TV”—it was highly likely you might have to fight and soon.

The Little Drummer Boy cartoon was on television and why were all these holiday stories so sad? I remember sitting in the chair just inches away from the icing and lights on the tree. Walter Cronkite had just been reading the evening news and that was sad too. So much war and bad feelings succeeded in making me feel bad too. According to Mr. Cronkite, it was a smart time to be ready for action too, just like “Action Jackson” with Vietnam still going on. My uncles, great uncles, grandpa, and great grandpa had fought in wars. My dad had even went into the Army at a young age rather than drafted. He was eager to go fight for his country to be more like his older brother who he loved and respected.

I have no memories of my father. His memory is like a blank page in a book filled with only other people’s memories and black and white photos of a dark-haired young man who looked like he could have been an actor. There was a double-exposed picture with Mom, Dad, and baby me sitting on blankets with a couple of dogs out in our backyard. The effect was that there were two images of each one of us. The two of me, almost identical, with crazy red hair like a mohawk and reaching my toddler arms into the heavens like I might blast off. It was about 1969 so maybe I could have went to the moon. Two boys with two different futures flying into the future, but my life had eventually solidified into this one.

Everything changed when my cousin, Jeff, came over with his G. I. Joe with the Kung Fu grip! His hands almost seemed as real as his hair. Jeff showed me how you could dangle him from countertops with his gripping hands. It was so indescribably cool. I just had to have one and pestered Mom until she broke down. All she wanted to do was please me.

I always assumed I would serve in the military too and it would prove I was patriotic, a real man, with red, white, and blue running through my veins. At the same time, Mom’s favorite group was CCR and while I was playing in the living room floor of the singe wide trailer “Fortunate Son” was blaring on the record player. The picture window in the trailer had an American flag for a curtain. “Wow,” I said, when she stood on the couch to hang it up. It was Dad’s flag Mom said in a quavering voice. She wiped at the tears in her eyes. I took the opportunity to jump up and down on the couch next to her.

G. I. Joe seemed the epitome of manliness. He wore a serious expression. He held his fingers in a gesture (if he wasn’t holding a weapon) that looked like he was saying, “Oh, about this much.” The gesture seemed somehow effeminate though I didn’t know what that meant back then.

When you stripped Joe down his body was thin and somehow inhuman. There was the problem of the holes in his chest where his drawstring voice emanated from. His arms were thin and almost robotic looking. His flesh-colored limbs were slightly different hues as if he were some sort of Frankenstein’s monster. He was made for action, but even naked the look on his face said he would do what he had to do. If that meant suffering certain indignities at the hands of children he would do that too.

The time, after Christmas, he met Barbie and Ken for a nice springtime lunch he went into an inexplicable fit of rage and tried to destroy her fine Corvette with an incendiary device. My cousin Lisa said she thought it might be as a result of a flashback from the war. Of course, that pent up rage didn’t come from him. He was not responsible for his violence. Everyone agreed that it was not like him. It was not in his character to do such a thing. Of course, it was not him who was to blame since I was the one who made him do it. “Mistakes were made” as President Nixon later said in his memoirs. Joe had come of age after World War II. It was a different time.

Daren Dean is the author of the novel Far Beyond the Pale. His short story collection, I'll Still Be Here Long After You're Gone just dropped in December 2019! His work has appeared, or is forthcoming, in Louisiana Literature, Delta Poetry Review, Maryland Literary Review, Midwestern Gothic, Fiction Southeast, Green Hills Literary Lantern, Red Dirt Forum, Yemassee, and others. He has recently been nominated for a Pushcart Prize. His favorite unofficial title comes from Robert Olen Butler who referred to him as "the laureate of fallen angels." Currently, he's an Assistant Professor of English at Lincoln University of Missouri.
http://darendean.wixsite.com/daren-dean

← Toward a Happy Culinary Life (Notes)
A Father’s Counsel →