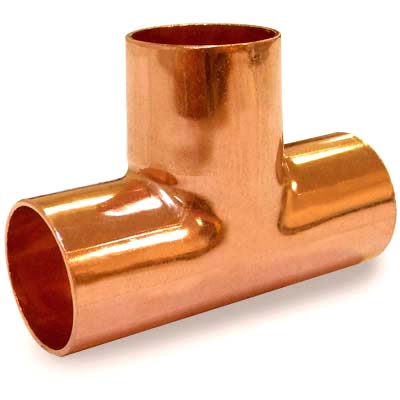 Fred had flux on his fingers. It was lead-free, self-cleaning, from a red-and-white tin the size of a hockey puck. He’d tried the brush that came with the kit but the clumps had refused to spread out the way he wanted them to. It was cold. Pipe-freezing cold. He needed his fingers to warm the metal, so the flux would go on smooth.

Fred pushed a coupling into place and eased open the gas torch. He lit the flame with a lighter. Bits of solder stuck in the nozzle like tiny silver fillings. The blue flame was lopsided and he hoped it burned hot enough. He angled the torch down at the mess of copper he’d constructed on the basement ground, propped up on old pipes with their inch-long gashes where the metal had flowered open from the ice. The blue flame split at the ¾-inch tee joint and wrapped around either side like a tiny pair of ethereal tongs. Then he waited.

The flux went soft and melted and kind of bubbled at the edges but when Fred touched the unwound solder to the joint it stuck and beaded like a little ball of mercury. It wouldn’t suck into the joint. The bright copper turned an agate color and the sticker with the bar code flamed and became a dark smudge. He pushed the solder into the joint again and again but the blobs nicked off the copper and fell like ball-bearings to the dirt floor. Maybe he hadn’t got all the water off. Maybe it was just too damn cold. The soldering had worked for the ½-inch but it had dripped into the torch nozzle and the bigger, ¾ joint wasn’t budging. Fred touched his fingers to the end of the pipe to melt off the excess flux and get his fingers warm again.

Two hours earlier he had been in his office faxing an offer on a brick Greek revival for one of his clients. It was a cherry place with a yuppie stainless kitchen, Viking stove and original moldings from the turn of the century. It had been on the market for two years, dropping a couple thousand with every downtick of the S&P, and the offer was a fraction of what the place was worth on paper. Didn’t seem right somehow. And now here he was saddled with his own property, a Christmas foreclosure, a rental he’d snatched up for a little more than what you’d pay for a car. He’d forgone the inspection because there was a bidding war and the place had been recently renovated. No contingencies. Now here he was. Fluxed hands. Cold. And money hemorrhaging out of him like blood from a new wound.

Fuck it, he said.

At the hardware store, he stood with a clerk in front of a shelf of new torches. This one, the clerk said, 30% faster, automatic ignition. That’s what you need, a hotter torch. Fred took it and went to the till and swiped his card and signed on the electronic line and within half and hour was back in the dark basement sixty bucks poorer.

But the clerk was right.

The flame was a brilliant blue, about an inch wide. It feathered out at the edges and when he put it to the joint it covered the copper in a wash of translucent blue. He waited ten seconds to be sure before moving in with the solder. It sucked in immediately and the excess dripped and splattered on the floor. Smoke poured from the open ends of the pipe, and for a moment, Fred was happy.

He fluxed the burnished ends of the old pipes and fit the welded piece into place. The coupling was just outside the slatted wood covering an old crawl space, and the February air blew hard through the gaps. Maybe that’s what did it. He’d have to get some spray foam insulation or they’d burst again for sure. Maybe wire-wrap, even. It was always something that cost more money. But, for now, the pipes. He unwound the solder so there was plenty to push into the joint and then clicked the torch on. It felt good not having to light the thing. Flame on, like the Human Torch. He lifted the flame to the coupling and caught a bit of the beam behind it. There’d be some charring, no big deal. Seven seconds this time and he pushed the solder in and it dripped around the joint and he was done.

He shut off the torch but the flame on the wall had picked up and was going strong. He pulled his coat sleeve over his hand and beat at it. The sleeve came back hot and charred. The flame started curling up the slatted wood, fed by the cold air. He would need water now, and lots of it. Fred clattered down the aluminum ladder and ran to the water main and turned the valve and heard it filling the pipes. He hadn’t soldered the other side of the patch and bursts of brown water sprayed from the joint. He jumped up and yanked hard but the water was at least a foot from where it needed to be. Fred moved the ladder and climbed up and held his thumb over the pipe and angled the flow as best he could at the growing flames. There. The flames hissed and smoke filled the air in wooly billows. Fred covered his mouth with his sleeve, trying to avoid his fluxed hands and he climbed the crumbled steps to the bulkhead doors and threw them open.

Outside he sat down, dizzy. He’d inhaled several lungfuls of smoke and felt like an asthmatic trying to get his breath back. He breathed through his nose and the cold set into his chest. His jeans were muddy from the knees down and the flux saturated the sides of his thighs where he’d wiped off the excess. His parka had silver stars of solder burned into it and the one sleeve was blackened. If Donna drove by right now, she’d see a bum, a little on the heavy side, face smeared with grime, sitting in front of his cheap-ass house on his frozen lawn. It would confirm everything she’d told him, how he was the kind of guy who could fuck up winning the lottery.

The smoke cleared. Not a bit of charring on the outside, protected by all that aluminum siding. Fred lumbered back down the steps and took his bearings. Moisture hung from the joists in beads. If he didn’t get these pipes fixed, didn’t get the water on and call the utilities to hook up the gas, they’d freeze that way, like little transparent teeth.

The charred wall still steaming and the blackness spread out in a fan. At the center of the scorched area was a hole the size of a quarter. And through this hole, light. Without thinking, he pulled the fabric of his parka over his hand and punched into the weakened wood. More light. He pulled off chunks of charred wood until the slats grew thick again and he had trouble getting it to budge. It was a crawl space.

He went to get a pry bar…

Eric Freeze is the author most recently of Dominant Traits, a short story collection set in southern Alberta. He's an Assistant Professor of English at Wabash College and he has published stories, essays, and translations in numerous periodicals including Boston Review, Harvard Review, and The Southern Review.

← No Hope For the Insect Bitten
BULLshot: Eric Freeze →