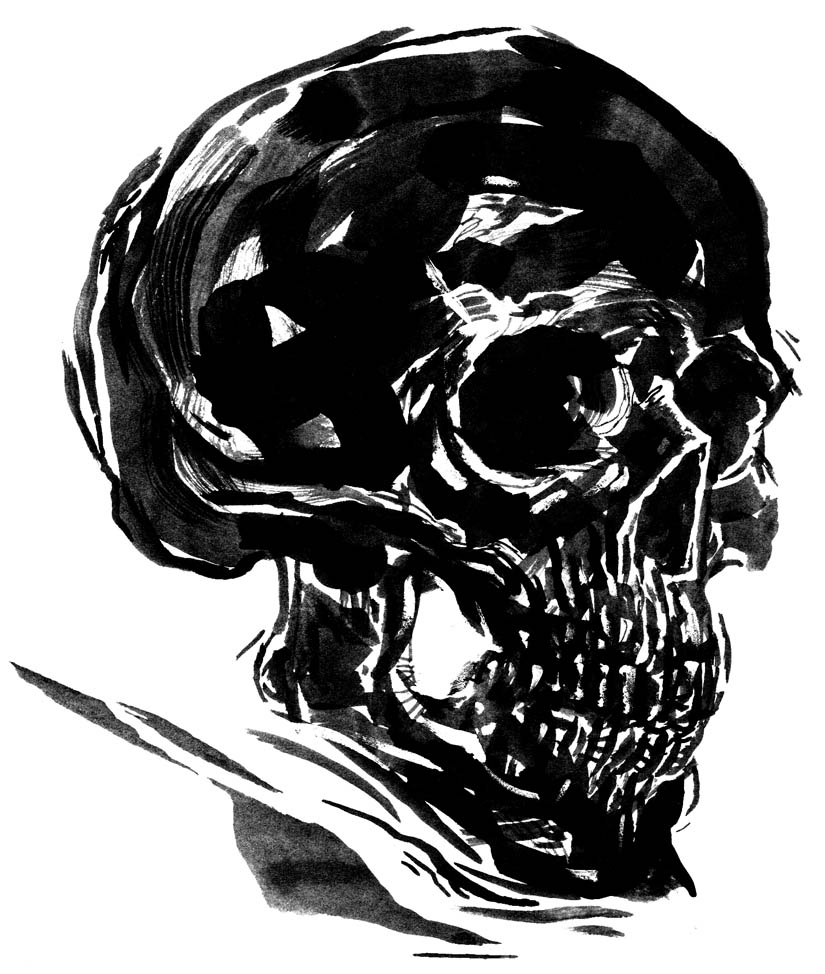 Finally we held the weakest among us to the deck while a shipman named Fernam drew a cooking knife across his neck. There was talk of choosing instead the captain, who was, by his authority, most responsible for our doom, but we were hungry, not murderous or vengeful, and so selected not the man most deserving of death but the man nearest it already.

Fernam used a cooking knife because we had by now abandoned our war blades in the hold or thrown them into the sea. Our victim, de Crasto, did not seem to mind, seemed if anything relieved that we remembered to open his neck before opening the rest of him. But in truth he likely felt nothing. For days his body had been slick with fever and in the final hours when hailed he could only roll his eyes.

We butchered him on deck and carried the parts below, to the cook’s sandbox. We openly slavered in the flames’ light but shared each piece as it was removed from the fire, likely for fear that anyone denied would begin considering the next supply. The thighs we cooked and ate first, then the meat of the calf, then meager strips from the man’s breast and back and then, drunk with satiety, with men vomiting their dinner and taking it up again from between their knees, we placed the feet in the fire and ate even them. The head lolled near the sandbox and we left it there to watch the blaze as we shuffled off in search of dark places to sleep safe from ourselves.

I do not know who carried the head to the upper deck, but in the days to follow, as we returned to hunger but now without a man close to spoiling before us, we began to mind the head, balanced it atop a coil of rope near the stern and gathered close, as if it might ward against another feast. Had a wind carried in or waves struck our ship the last of de Crasto would have toppled and rolled but we floated in cursed calm, each day surrounded by the same fading blue in all directions.

And despite the passing of days and the sun’s baking heat the head too refused to change, would not slack or darken or fester. We considered on quiet nights whether we might lift the perfect lids and find bright eyes beneath, peering and ready, sliding from one face to the next. Other nights, we debated the gain to be had by stripping the head, pulling muscle from jaw, even taking up the thing like a great apple and biting, tearing. But the flesh was by now poisoned or possibly sacred, the head granted special protection by God, left forever intact to remind us of our sin as we finished our starvation. When finally one of us rose to pitch the relic overboard we others were transfixed and insulted. We all had lain on the deck for days now, naked to the sun and stars, but as the man, Torero, approached the head, some of us sat and some even stood. Yet still Torero staggered to the thing and took it by the hair, looked at each of us, waiting for complaint, until the head’s skin went slack and the skull slid free and knocked to the deck.

We came closer now and watched the skull roll to stillness at Torero’s feet. The thing was dark, and not simply with gore but with a natural tint, a shine, as if polished and dyed to the deep black of stone. Wetness clung to it, and sinewy tissue. The eyes at least had withered and empty sockets stared up at us, welling with sunlight, and a noise stirred from the skull and its jaw fell open and it spoke.

The voice was low, a buzzing rasp, and neither it nor its language had belonged to de Crasto. After a few words it went quiet and remained so even into that night and even when we woke hours later to find the sky purple with lightning and the ship bucking beneath us. Rain carried in sideways and what garments I still wore had soaked through while I slept. Men had already risen all around and I stood and nearly slipped in water and then fell as a wave took up the ship’s back, then her front. My head ached where it had connected with the deck and I slid back and saw other men scrambling and the skull tumbling toward me and I caught it.

Through the wind and rain and noise of waves we strained to make ourselves heard. Men yelled in joy and fear and finally someone went man to man asking for a compass, as if any of us might still carry one or even remember where the last had been left. We might have set the sails by the stars but all were hidden by storm. Some of us went to ropes anyway, and some of us lay back down to drift in the water at our feet. I watched as the captain himself climbed the bulwark and, without looking back at any of us, dove headlong into the clashing sea.

The skull I kept cradled close, and when the chaos became tiring I carried the thing below decks, into the tilting quiet darkness…