The Psychology of a Knife 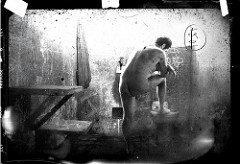 First, shave your leg. Your thigh specifically, the area where you would write naturally and don’t forget what hand you are. Write entire outline. Go to yard. Act crazy when you stab because stabbing, in and of itself, is not enough for the single cell. You must pee on someone, recite financial instructions, make your way to Zanzibar. When digging through the yard, one handful at a time, remember: stabbers go with stabbers, crazies go with no one. (Also: do not use “in and of itself”; this is bad writing.)

You break everything—the order, the rules, even the person. You tell them: “Just because I am not being disturbed does not mean I can do it. I have to have that guarantee that I cannot be disturbed, that unbreakable seal. I need: to know that no one will yell, scream, or cry at any given time. I need to know no one will come through that door, that you will not search me in the middle of the night, that you will not flick the lights and say: ‘You’re getting a white guy.’ That you are not going to write me up for refusing him (which I will do) on the grounds of it ruining my art (which it does). Art to you is a playground, a place where children fling paint at the stars. To me it is cosmic escape, an adventure to the stars, where I pick up its dust and fling it back. I can’t have you telling me: ‘Here’s three Sureños in your vent. They love to kick the shower.’” (Also: never use “on the grounds of”—very itchy.)

Break all the rules, the order, the person, even the proper nouns.

Option 1: If you cannot write with a flexpen, read on. If you can write with a flexpen, and don’t need to shove three Bics up your rectum for safekeeping, skip this paragraph. First step: obtain lotion, saran wrap from sandwiches, three rubber bands. If no rubber bands, then floss loops. Take regular pens (pick favorite ink, remember one for editing), band them three times: middle, both ends. Step two: shrink wrap it. Pull wrap tight, cut loose ends. (Remember, shrink-wrap shrinks; take heart.) Step three: Take lotion and lotion the very tall, very daunting object three-fourths of the way. The rest will be pushed down later. Now: grab photo of girl you like, take deep breath, squat. How bad do you want this? Flaubert would have done it. Gogol would have done it. When you hit breaking point, look at photo. Don’t think about her, think about being her: squat further. Think about what she thought when she took your dick. Next: when fully inserted (hopefully caps first), walk around. Get used to it. Dostoevski got used to it. Villon got used to it. Genet got really used to it, which brings us to our next rule: three and free. Three is enough to for a solid ms. Two is not enough: two and you’re through. If you think you can take more than three, by all means, but remember that rule: four and you’re a whore.

Option 2: If you’re ok with the suicide pen, AKA the flexpen, the handkiller, the Graphologist’s Nightmare—don’t worry, they slide one under the door. If you knew you could write with a flexpen and yet still read Option 1, congratulations: you’re a sinner, AKA a reader, a writer, a macabre sonofabitch. There’s more rules, but you’d just break ‘em.

Crazy people aren’t crazy—they’re just convinced no one listens until they act that way. Everyone respects blood. The brighter, the better. Remember: slash, do not stab. Stabbing punctures lungs, perforates organs. Unless you are working on Human Comedy-cycle, do not get a life sentence. Blood achieves the most dazzling effects for the least exertion: a superficial scratch on the head or face will paint khakis, splatter sally-ports.

Be terse, epigrammatic, concentrate on what matters. Break the titles, the rules, even the dialogue.

Do not threaten: attack immediately. Abrupt, overwhelming violence is needed. Saltatory and wild. (Remember that saltatory is too big a word—do not use, do not be sesquipedalian. Also do not say “sesquipedalian.” You’re hammering nails, not balancing acupuncture needles.)

The victim: this is easy. Make sure it is someone who hurts children. If none are available, one who hurts women. If none of these are available, slash the person that reads thrillers. The blood of philistines arouses something familiar in authorities: they will see themselves and will see you as a monster and they will lock you in a cell within a cell within a cell.

Your new home: clear away all bad thoughts. This is your sanctuary. Touch the walls, remember the silence. Look under the stool, behind the desk, behind the shower curtain. Kick things: kick door kick sink kick walls kick ceiling. Kick bed. It’s not going anywhere. You’re not going anywhere. The test of a man, the true test, is to see what he remembers in tranquility. This is not tranquility—this is as good as it gets. To know there is no place to descend further, no route out, no way up or sideways or in-between—that is tranquility. This is how you weld yourself to the cell, like the stool is welded to the desk and the bed is welded to the wall. This is how you weld yourself to art. Solitary confinement is not grocery lists, it is not barking dogs. It is not home or the drive. It is not five o’clock traffic, it is not ATM fees, it is not blight or strippers on Fifth Avenue or homeless people asking for exact change. It is not your wife. It is silence, relatively speaking. It is a small world, but it is yours. Here you are emperor, here you are Rome. Here, maybe your are even Empress. But remember: here, the pen is God.

Make sure count is over. If possible, put up shit-sign. Squat over towel and think. Think about fiber. Think about Fruit Loops and destruction of urinals. Stare straight ahead and think about the uppercut of creation.

Rearrange sleeping schedule. Sleep from dinner on. Wake at 2 a.m. Here is your tiny bubble. Here is your world. Sit before blank page: your turn to bleed.

Dante Modaffari is a writer originally from Anchorage, Alaska.

← How to Pick Up Beautiful Women
Parallel Lives →