To The Man Who Loves My Wife 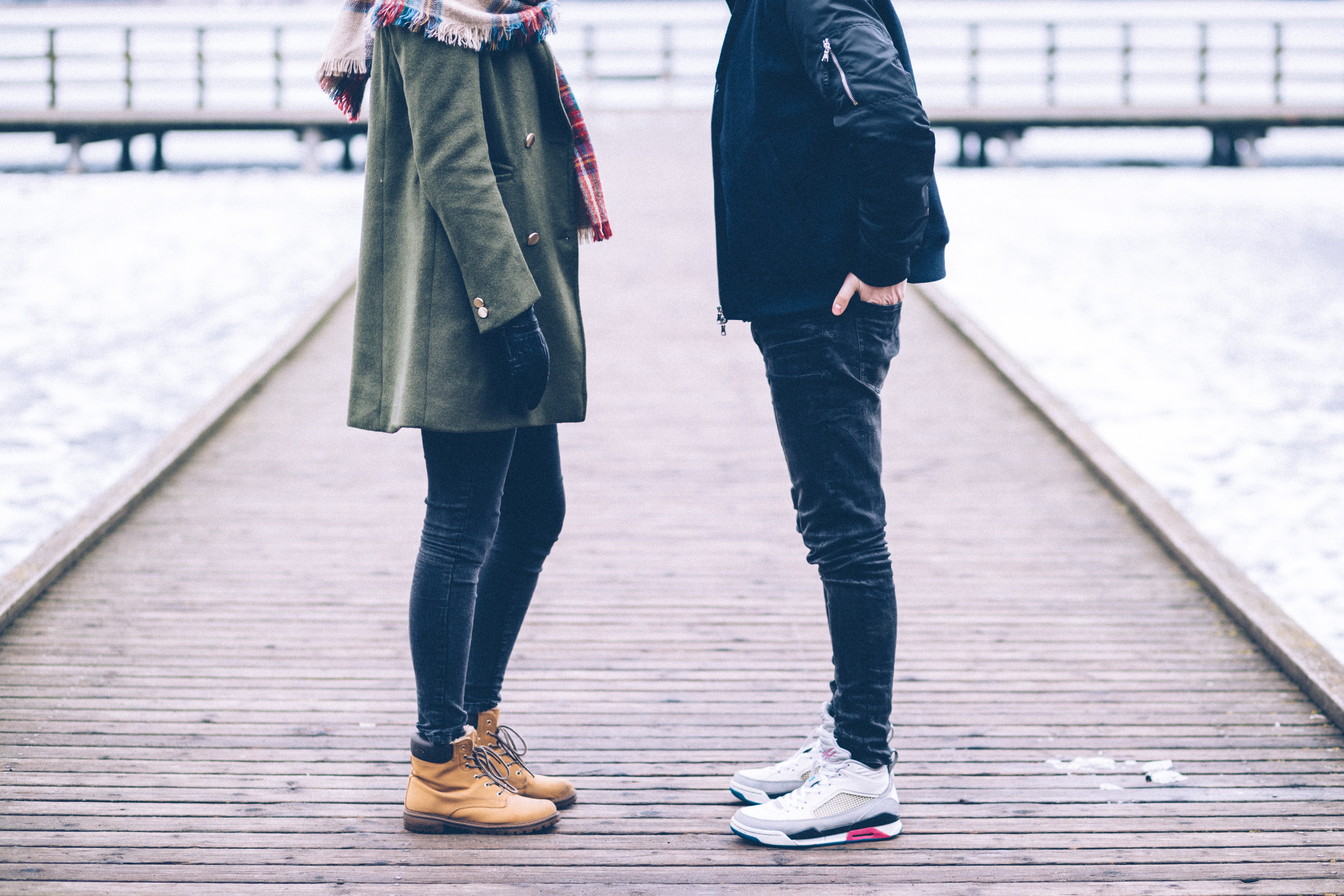 First of all, I want you to know I don’t want to kill you.

I’m not going to hire a private detective to take incriminating photographs of you and her. I already know you from the fingerprints you leave on the fridge, from the magazine in the bathroom folded open. I know you from the empty bottles of Blue Moon I once found in the trash. I hope you know that there’s plenty of wine in the basement, both red and white. Your choice, my treat. My wife’s mother sends a bottle out every year as a Thanksgiving gift and we always stick it down in the cellar.

I know you from the six pounds our dog Rex has gained since you started coming around and giving him table scraps. Every day when I come home, he greets me and then sniffs around like he’s looking for someone else.

What do you see when you look at my wife? I only see the blinking answering machine that we have so that she can talk to her sister who has bad cell phone service.

I often hear her whisper into the phone, “All I ever wanted was for him to…”

Whenever I think of you I find myself thinking of her, but not her, the woman who sleeps with her back turned against me like a wall. I mean her, the woman I fell for.

I had completely forgotten about that version of her until I found out about you. So thank you for that.

We met in college. I saw her dancing in the center of someone’s living room, her fingers in the air, a bracelet catching the light on her slender wrist. We climbed up onto the roof and sat beside each other in the dark.

I was an English major then. I’m sure my wife has told you about how I gave up on the idea of writing clever things at cafes in France like Hemingway used to. You probably majored in something sensible like business. Or who knows, maybe you were one of those philosophy types and you still pull out lines from Plato’s Symposium now and then.

That night on the roof she wore a pink dress and no shoes. Someone in a bedroom down the street was playing a Janis Joplin record from an open window. At sunrise we were drunk, so I brought her back to my room and cooked macaroni on a hot plate. We ate it with plastic spoons and fell asleep on my twin bed. When I woke up it was raining and she was still asleep. I held my breath and stayed perfectly still, as if I was standing in front of a deer in the forest that might run away if I moved.

I felt as if I had been chosen.

Does she make you feel special? Do you make her feel that way? I’m not sure if I ever did. Maybe at the beginning but not so much later. There were a lot of little things I forgot about over the years. I saw the leftovers from your Valentine’s Day lunch you took her to. Very nice. I’m glad you did that.

After we met, we spent every night walking back and forth between each other’s dorm rooms. I would wrap my arms around myself on cold nights and count my footsteps in the snow until I got to her. She had a yellow daisy bedspread and that picture of Jim Morrison above her bed, the one where he’s shirtless and pouting and his arms look really skinny. Whenever I stayed the night in her room I’d find myself looking at it and not liking the way he looked back at me.

Sometimes we’d drink in parking lots out of brown paper bags. Other times we’d wander the cornfields at night. She would always run her hands across the strands of grain and it would make this sound like sssshhhhhh. I loved that sound.

What do you guys do when you’re not having sex? Do you watch television like we did? Is that the faint smell of American Spirits that I sometimes catch the scent of, the bedroom window open to cover it up? Do you ever get too cold sitting up in bed with white sheets covering your naked bodies, puffing on cigarettes?

I would walk around campus and glance at the guys who sat in the grass and played guitar. I pictured her with them. Imagined her in photographs next to them, wearing a dress I’d never seen before. Do you have any idea what that feeling is like? God, I can’t even remember it anymore, the awful sickening that used to live under my skin when I wondered what it would be like to lose her. I’ve been looking for that feeling since I found out about you.

I want you to know I don’t scan crowds at the mall looking for your face. Jealousy is for when you’re young and good looking. Surely you were at a party once trying to talk to the pretty girl and she left with someone else and you stood there holding a warm beer and feeling like the dumbest guy in the room. You’re probably more like me than she wants to admit. I found that Detroit Lions t-shirt you left. I was doing laundry. I like the Lions. I even liked them when they lost every single game in ‘08. I watched every single game.

I put it on once—just once. It didn’t smell like anything. It made me want to tell you about the cologne in the cabinet that she always buys me for Christmas. She likes cologne. It’s in the cabinet. You should wear it sometime.

I wore it all the time after college during the years she and I shared a one-bedroom apartment in the city. I would catch her sneaking little sniffs of the back of my head whenever I was at my desk. She worked at this big department store selling scarves and sweaters to tourists around Christmas. I submitted poems to literary journals. Every time the rejection letters came she cooked me pie.

Do you shower at your place before you see her? Do you clip your fingernails so that you don’t cut her when you run your hands over her bare skin?

She complains about feeling ugly. Do you tell her she’s beautiful?

I proposed to her shortly after we moved to Michigan. We moved there because of a job I had teaching writing. It didn’t last long and we stayed anyway. We stayed because she wanted to get pregnant and live in this cold place all bundled up away from the world outside. But living in the cold north is only romantic if you can afford a house with a fireplace.

And besides, I couldn’t get her pregnant.

Let me tell you about the last time we had sex. It was a few months after the therapist stuff ended. I came home from work with flowers for her birthday and she said, let’s do it. Really. That’s what she said. She looked sad when she said it.

Her clothes were hard to take off. I fumbled with the zipper on her pants, the clasp on her bra. We put on some music. Something sexy and slow. It all felt like we were trying too hard. She took off my clothes, struggling with the buttons on my shirt.

She forced a smile and I said okay. I played along. She asked if I was nervous. I said yes. We kissed and it was like we had forgotten how. I went the wrong direction. Our teeth bumped up against each other. She used too much tongue.

After the sex, that very last time, I went outside. I was still naked. I don’t know what I was thinking because it was so cold. The backyard was blue. I shivered. I remembered the first time we ever had sex and how afterwards she’d reached for the bottle of wine on the nightstand and said, “You were lovely.”

I dreaded going inside that night even though the air was icy. I knew we would never touch each other again. Rex watched me through the sliding glass door. He made the smiling dog face and thumped his tail against the cabinet. We stood there for a while, me outside and him inside, watching each other.

What I’m really going to do is stay at a motel where I’ll watch television and eat at one of those desolate restaurants on the side of the highway.

I bought some beer for you to drink while I’m gone. There’s a bottle of vodka in the freezer if you run out. I think there’s plenty of food too. You can defrost a chicken if you want. Eat the fresh vegetables in the fridge before they go bad. Water the plants, if you can remember to. She always forgets.

If she wakes you up in the middle of the night, it’s no cause for alarm. She has trouble sleeping. Pills don’t work. Put your arms around her and pull her close. Hold her hand in your hand. Put your face against her hair and breathe in.

Think of something beautiful, like when you were young and the world was open and golden.

Don’t worry about looking after the dog. I’m taking him with me.

Everybody needs some company.

Krista Diamond's fiction and personal essays have appeared in Barrelhouse, Barnstorm Literary Journal, Longleaf Review, Barren Magazine and elsewhere. She regularly contributes to Eater, Time Out and NPR's Desert Companion. She lives in Las Vegas, Nevada, with her husband and her dog, Presley.

Photo by freestocks.org from Pexels