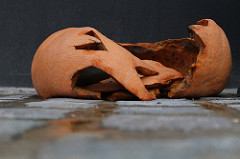 Truth is I don’t know if he was a friend.

There’s this photo of the homeboys at a BBQ at the Santa Fe Reservoir: the white sun is shining, the grills are smoking, and there’s all this good food out and coolers of Coronas, and Lumpy says, Smile! and all of us repping in gray and black, the kids too, get together to throw up the hood and pose for it.

He’s still sitting back there by the benches, his rotten arm tucked up in that rotten sling, and the one that didn’t get hit reaching past all our plates to snag that last drumstick rattling in the bowl.

Look. I’m not talking about him snatching that chicken. That chicken is good. But check his face though.

While we’re all happy and shit?

It all comes out, no matter how many years later.

He hated that photo, but it was telling the truth.

Nobody said, Listen up, but when it was time to drop Dougie, we all knew. He’d been hanging around too much. He’d gotten too comfortable, laughing at his own jokes and arching his too-thin eyebrows.

We had him meet us at the park on 2nd, by the benches, where we silently gathered. Little Tim had swapped out his fat Adidas laces for skinny black ones. He tightened them carefully. We didn’t bother dressing up or putting on monster masks. We were 13. We were what we were.

We’d told him the plan for Halloween—kicking pumpkins and snatching candy sacks from the kids—so he arrived ready for pranks, rocking a lit-up devil horns headband, and saying Boo! and laughing: at us.

This only confirmed our opinion of him.

At the first house, he ran up the porch steps before anyone and booted that pumpkin into pulp and shrapnel, always so eager, trying so hard.

While we walked away from the light, Little Tim said, Ay. You got pumpkin on my pants. Dougie was still laughing. Sorry. You see that though? That pumpkin fucking blew up.

Yeah, said Little Tim, blew up all over my pants.

Then he hit Dougie in the mouth.

Hey what the hell?

Timmy hit him again, and we circled the two, to keep the fight fair, we said. But Dougie didn’t fight very hard. We didn’t have to do anything. He dropped on his own.

We stepped away from him curled on the sidewalk: a spit-out thing. He didn’t say, Fuck you guys, or ask why. He seemed to know. He must’ve been heartbroken.

These days, he works in sales. In his Facebook photos, he’s always in suits, always smiling. In the end, he had turned out OK it seems, better than we had—just as we’d suspected he might all along.

Steve Chang is from the San Gabriel Valley, California. He holds an MFA from Cornell University and lives in Busan, South Korea, where he plays bass for GENIUS. His work has appeared or is forthcoming in Guernica and Crag.