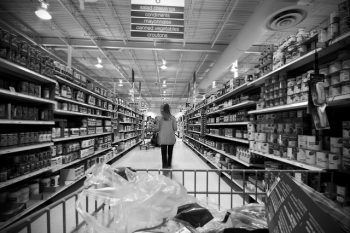 The grocery clerk puts on his slippers and retires to the den, or what he calls the den. It’s really just an architectural feature of the attic loft in which he lives, such that a small niche exists where the roof slopes down by one of the windows, with enough room for an armchair and a card table. He stares out the window and contemplates that day’s events and what has become, in his mind, the purple tragedy of that afternoon.

He’d been stocking shelves at a slack moment after his lunch break when it happened: his ex-wife entered his aisle, pushing a cart full of produce. She looked beautiful, and he’d been reminded of how much he missed her. Their marriage had dissolved in montage, from one frame to the next: he lost his job at the bank and pouted in sweatpants and a t-shirt; she supported him but was privately repelled by his inertia; he took to home improvement in an attempt to reassert his masculinity and proceeded on a program of serial ruination that encompassed all closet doors, the deck, the lawn, and two sump pumps. He came home one day from the mulch depot and found a note from her stuck to his belt sander. “I can’t be a connoisseur of small disasters like you,” she wrote, and told him she would be staying at her sister’s upstate for a while. That was eight months ago.

When he saw her in the soda aisle with her produce, he knew she had a new man in her life already—she hated soda and did not drink it herself. He watched her browse through the brands. She must have been looking for the new guy’s favorite. She slid a bright purple case from the shelf and he knew what it was by sight, Diet Chek’s Easter Mist, a holiday soda. She cared enough, he surmised, to search out and purchase a disgusting and conservative soda for her man. His heartbreak was immediate and intense, and he felt as though his skeleton wanted to sidestep from his body and start doing jumping jacks right there on the linoleum. He gasped out loud and she turned towards him. “Gary,” she said. “I didn’t see you there.” He waved with the two-liter bottle of orange fizz soda he had in his hand. “Suzanne. You’re looking well,” he said, trying to appear nonchalant. He walked over to her and thought for a delirious moment that he would hand her the soda and say, “Orange you glad to see me,” in an attempt to keep things light, though no, he thought, that would be hideous, and he shook his head and said, “Fuck,” aloud without realizing it, which she heard and recoiled from with a grimace on her face. She fell backwards into the shelves and knocked over some cases of special edition glass-bottled grape soda, which shattered and sprayed purple liquid in carbonated geysers and cataracts all over the floor and both of them. “Same old, same old, huh?” she said. He handed her the two-liter bottle and said his line, with a voice full of feeling and tenderness.

Recollecting this at night, in his den, he blushes in the dark.

When the plumber couldn’t sleep, he imagined women naked but for their hats and tube socks applauding him at a bowling alley, and, if that didn’t work, he would go for a walk in the woods and compose little poems. Limericks and tercets and rhyming claptrap that he cherished as an outlet for his mind’s wilder side. The poems had to be short, for his memory was poor, and besides he made it a rule that he would only ever write down the ones he could remember by heart. He liked when his poems seemed to snap shut at the end of each line, and those reminded him especially of a small wooden box his mother had had when he was younger, a finely crafted jewelry box with milled corners and edges that looked unreal and even antagonistic from certain angles, as though whoever had made it had found an ontological loophole through which to force this thing into existence and which allowed it to keep its complete and brutal appearance. He had seen some things in his time as a plumber, baffling and puzzling and even wondrous things, and those all figured in his poems, which he kept secret from everyone but his occasional girlfriends. There were extraordinary toilets, and the spectacles contained therein: the mighty deeds and eliminations of humankind. He witnessed those and rendered his testimony in verse. He’d acquired many new words—like “surd” and “fyrd”—by the execution of his poetics. His ultimate ambition, however, was to assemble clear and simple instructions for each bathroom that lay in the town: public, private, and temporary. All the idiosyncrasies of every toilet, sink, and shower in the area put forth in clean directive prose as a public service to their users. “Do not overflush this one, it is tender.” Or maybe, “Whisper your request to the diverter, rub the spout, and pull.” Done well enough, his efforts would solve the problems of his profession; he could lay down his helper and take off the overalls, finally, and wash his hands of it all.

Kevin Hyde's work has been published online at Gigantic, McSweeney's Internet Tendency, and Eyeshot, among other places, and in Penny, Redivider, Parcel, and Big Fiction. Previous parts of the Single Panel Comics series have appeared in Redivider, Gigantic, and Eyeshot.