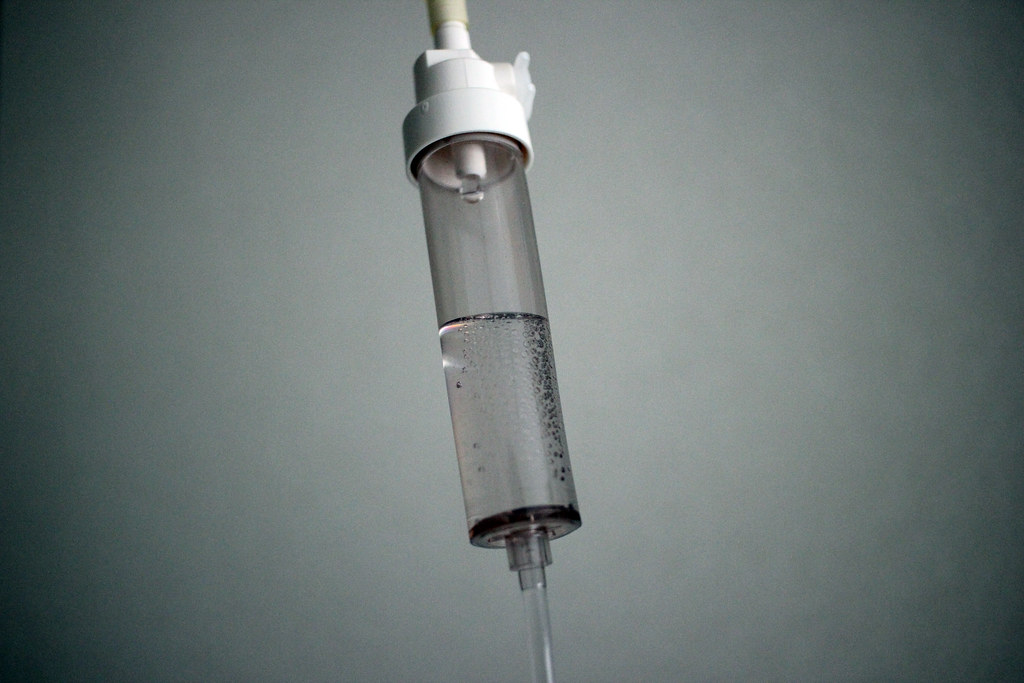 Her health aids told me later that sometimes Beta made lewd noises in her dreams. I didn’t know the secret of morphine until that week. She kept fluttering out of her special darkness every three hours or so, making quite a ruckus until she received her next infusion. Now I understand.

Occasionally, she became somewhat lucid and would begin crying about her past or get very angry at her present, reminding everyone that she’d quit smoking at the age of sixty and had never had children, never wanted them, and that both of those things should not have meant death at the age of seventy-six. She was our stepmother. We’d lost our father the year before.

There, on her death bed—the ending of everything that had fucked up life for all of us in so many ways—it was clear this woman needed to conjure something out of herself one last time. She’d made a life out of being the star of her own show. And still, I could never tell if I was considered a member of her audience or some kind of voyeur she needed.

I arrived after driving two long days through a new form of global, reptilian heat. They’d put her death bed together in the middle of the living room, surrounded by big art, designer lighting gadgets, weird little sculptures of people’s heads, our father’s Dutch sound system, and the industrial era Scandinavian furniture her brother-in-law Jesper had made for them over the years.

I’d never actually thought there were actual death beds. This one had been built by Jesper based on a number of Northern European mortuarial furniture traditions—dark teak, tongue-and-groove fastening of the main support planks to the posts, heirloom iron funeral nails. Jesper said that sometimes the idea in their family was that death comes to sleep with people as early as a month before the end. Sex is sometimes attempted. Jesper was Beta’s sister’s husband. He was your standard Swedish-Irish carpenter who had once been a PhD candidate in sociology but felt himself a poet, actually, and a becalmed intellectual.

The bed was carried away in pieces and burned up along with Beta’s body. If you’re willing to pay for it, in that part of the country you can have a person’s entire bedroom set along with all their clothes incinerated with the body.

After the cremation, I went shopping for fresh vegetables and expensive bourbon. When I came home, all the windows on the side of the house overlooking the woods and Carter’s Lake way off in the distance were thrown open—like mouths exhaling bad hot breath into the sky. The air conditioning system was running full blast. Ceiling fans wobbled and roared to the power of ten.

I found my sister in the garage boxing up stuff from our step-mother’s car. “You know,” I said, “we’re the ones who are going to have to pay the electric bill now.”

“Right, but she died in pieces,” my sister said. “People with cancer like hers die in little fractals, growing and pulsing, glowing some, changing color, eventually disintegrating from the inside out. We shouldn’t be breathing any of what she has emitted.”

And yet, even with incineration and all that preventative air conditioning, each person who spent time in that house during and after Beta’s demise suffered some strange malady. My sister fractured her collar bone diving into a hotel swimming pool on her drive home to New York. The doctor who visited once a day there at the end had a moderate heart attack at work during a meeting with visiting Chinese surgeons. He’s the one who controlled the morphine and gave her that final dose.

One of the health aids got into a car wreck the Sunday after we left. Another aid lost her wallet, cellphone, and car keys at a bar and had to walk to her trailer park in a driving rainstorm. And the woman who did all the graveyard work there in that final two-week period of time, Ginger Mendez, got into a heartbreaking argument with her oldest daughter a day or two after the little memorial we had in town and has not spoken to that daughter in months.

It’s possible to chalk all of those things up to coincidence. I myself became sick somewhere in Arizona on the second day of driving home to California. Maybe I ate a bad breakfast sandwich. But it also felt like something more, something waiting for me to figure it out.

I stopped on the side of the road, rolled down the window, stuck my face out, and vomited into the good old painted desert sometime around when the sun hit its zenith. If you listen in the right frame of mind, you can hear the sky moaning in that kind of heat. One hundred fourteen degrees is what my dashboard told me. Projectile vomit into modern heat.

I crawled into the back seat out there on the shoulder of an exit ramp it seemed like no one had ever used, air conditioning bursting to fill the car. As I began to drift off, it occurred to me that we’re all voyeurs whether we know it or not these days, except maybe when we’re alone or sleeping. You can only be in the audience with other people when they love you and you love them back—or, of course, when you pay to be entertained.

I was hungry when I woke up—lonely and hungry. The secret of morphine is obvious if you’ve been around people ready to die. It’s in the air all around you too, these days. A whole generation getting ready to die. Morphine is a kind of volume control where ten equals zero and then you get to rest in peace.

In those final years together, filaments of gray began to mix with other tones. Cheryl-Anne referred to these as her silver-whites, sometimes just her grays, and became a master at snagging a random swath of ends to carefully inspect for the off-color and unwanted. She would enter into a weird pause in time and space, a blank sort of stutter, until a successful, desired discovery, and then dangle the newly yanked piece in front of her face for judgment. The offending member, or members, would then be allowed to fall from her fingers. Such a gentle use of gravity. The graceful fall of hair wherever she happened to be.

Mike marveled at this innocent vanity. His wife seemed more vulnerable than ever culling her hair, utterly the most lovable and world oblivious person he had ever known.

There were times, of course, when he had to complain, finding abandoned follicles around the house or in their cars.

“Why do you just drop them?” he would ask. “They’re literally everywhere!”

“Not literally,” Cheryl-Anne would respond. “Not even close…”

It became a lonely vigil to be on the lookout for spurious, rejected hair everywhere and anywhere. Inevitably, each strand picked up an electrical charge, integrating itself with most any surface their house offered—wood, clothing, painted walls, porcelain, upholstery, even windows and video screens. He found pieces glinting under lamplight on the rug, or sparkling in the corner of the bathroom, mixed with dust bunnies and abandoned spider web.

She’d been a younger sister. Their mother dropped them at the hairdresser once a season or so, and returned later. Her older sister, Becky, did all the directing and chatting and paying and gossiping with the staff. They might both get the same hairstyle, or they might not, depending on what her sister felt was appropriate. She remembered a pixie cut one spring for both of them. On an ending weekend of August, her sister asked for a style like Paul’s and demanded that Cheryl-Anne get one like Ringo’s. But George was Cheryl-Anne’s love, so she got his, which was a lot like Paul’s only with bangs. Once Becky left for college, Cheryl-Anne simply let her hair grow. No more hairdressers.

He loved the secret scent of her hair—part shampoo, part sweet warm scalp—a scent, he once felt, could only be for him.

In that final year or two, she spent a lot of time standing in the back yard by herself watching trees and the sky. She also lay on the floor with the dog watching TV, and she wandered the house in the middle of the night drinking a fair amount of gin, even smoking his cigarettes. This Mike knew was not actually called being depressed. It was more moping and feeling bad. She should feel awful, he thought. He certainly did.

While she moped, she plucked single crinkly strands from her scalp, expertly rubbing them with the tips of her index, thumb, and ring fingers like she was counting on a special new power. Finally, she would make a sprinkling motion and allow her unwanted hair to fall wherever below her might actually be.

Through the last twenty years of his life, Mike continued to find her hair: on couch cushion edges and the baseboards in the dining room; under the passenger seat of his car and stuck in every one of the seatbelt buckles; twirled into the corner of his phone screen; blended into freshly laundered socks; folded away inside his underwear and pajamas. Somehow, even after he purchased a new bed, her silver-whites would turn up in the sheets or on his pillow every few weeks.

When they came to clean out the house, they found a zip-lock baggie in a kitchen cabinet nestled next to several boxes of cereal. Another was found under the sink in his bathroom. And a third, smaller, showed up in the glove compartment of his car. By then no one really considered that he had once been married for years to a woman who didn’t cut her hair beginning in seventh grade.

Had anyone been curious enough to open one of those bags, they would have smelled immediately a faint, sweet scent of shampoo flowers and an even sweeter scent of something else hard to pin down. But no one in their right mind when they are clearing out a house opens a bag full of hair. All three went into a black plastic contractor-type sack put out at the bottom of the driveway with twenty or so others the week before the house was sold.

Dog Cavanaugh is a mixed race Afro-Irish American author. He lives in Philadelphia with his wife. He can be tracked down at https://dogcavanaugh.com/ and other obvious places online.

"Hospital bed." by Dan Cox is licensed under CC BY-ND 2.0