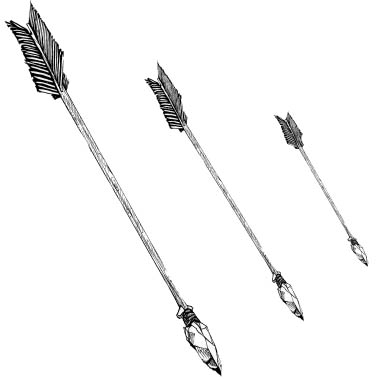 All week someone had been shooting arrows into my backyard. I’d come out in the morning for the first smoke and coffee of the day, and in the dewy silver grass was one, sometimes two arrows stuck six inches into the ground at about a 70° angle. Arrows travel in a relatively straight line from point A to point B, I figured, especially in the calm of the night, so I had narrowed down the shooter’s house to one of the four or five across parking lot of the Assembly of God, the distance of a football field away.

Most of the week I stood over my kitchen sink, looking out the window and wishing I had some binoculars. With binoculars I could probably spot some incriminating archery stuff leaning against one of the homes. I sure as hell wasn’t going to go snooping around the backyards, and I didn’t necessarily want to catch him or her in the act either.

While I was looking out my window I saw my neighbor Terrell hop my back fence. It’s a chest-high fence but Terrell is some sort of ex-athlete, with his Air Jordans and perpetual sweats and everything. Occasionally when he and his wife had problems he’d take off before anything turned physical. He would hang out in my backyard until his wife Marvel cooled off. I watched him talk to himself for a little while, watched him light a cigarette and pace around some. Then I got concerned. The sun was nearly down and the arrows fell at night.

I slid open the glass door and called him over. “It’s not safe out there,” I said, and he stepped onto the small concrete porch and then into my house.

“You got that right,” said Terrell, though I doubt we were talking about the same thing. He sat across from me at my dining room table and every now and then he’d glance nervously at the vertical blinds halfway closed across the quiet backyard.

It was his own fault his marriage was falling apart. Terrell felt bad about it and I think he really loved Marvel, but still, every other day when he got home from running his press at the paper factory, he’d hook up his bass boat to the back of his Dodge and meet his girlfriend at the little motel off the highway. Everyone knew about it; I don’t even know why he bothered hooking up his glittery blue boat anymore. He never brought home any fish, and he never smelled like worms.

I popped open a couple beers and kept my eye on the backyard as he spoke. “I knew something was wrong when Marvel had a nice dinner fixed with meat and vegetables, some mac and cheese, baked potatoes and gravy.”

“Yeah, but I’m pretty sure the meat was Alpo.” He took a long drink from the can of beer. “Or Mighty Dog. I found a little can with the label torn off.”

Lights were popping on around the church and in the yards across the parking lot. I saw some movement near one of the house’s swingsets, but it was only a dog digging a hole.

“With the gravy it was pretty good,” Terrell said. “I kind of liked it.”

We sat there, the both of us.

“Actually, Terrell, I’ve got a little problem of my own that I want to run past you. You’re an outdoorsman, right?”

I walked over to the closet between the kitchen and living room and took out the dozen arrows I’d collected there in a green glass vase of my ex-wife’s. Together in a bunch they really looked as if they belonged in the vase, with thin wooden shafts and white synthetic feathers as fins; they looked like a bouquet of genetically-altered flowers from the future. I set them on the table in front of Terrell.

“Someone’s been shooting these into my yard. I don’t know what’s going on—if they’re kids or what. I think someone’s trying to send me a message. From the way they stick in the ground, I’ve narrowed it down to one of those houses across the parking lot.”

He picked all twelve of them up, seeming to weigh them. He lined a couple towards the light over the table, then he felt the metal tips with his index finger. “I don’t think it’s kids. You’ve got to have strength to pull a bow, to shoot an arrow that far.”

I explained how they had been waiting for me in the morning—sometimes one, but more often two at a time.

Terrell took a drink of his beer and looked as if he was about to say something when we heard it: the hollow wooden sound of something hitting the concrete porch, then bouncing sharply off the sliding glass door. It couldn’t have been anything but an arrow. I felt vindicated. You share a secret like that with a neighbor—and you never really know neighbors—but you say something like that and maybe he’ll start thinking you’re lonely, just making weird shit up for attention. It’s very rare in life to share a strange secret like the arrows and have it verified immediately.

We rushed outside, and sure enough, in the yellow glow of my back porch light, there lay an arrow on the edge of the grass. Terrell looked up at the half-moon and I went to pick it up. “There might be more,” I said. “Maybe we should go in.”

Terrell and I looked across the parking lot and there he was, we saw him, what looked like a man waving down a car on a long stretch of 94. We walked over to the back fence. He made no attempt to shout at us, but only waved his arms, either trying to get our attention or warning us. Then he stopped waving, stooped to pick up something from the ground, and looked like he was fitting it into something else. Terrell and I ran inside, expecting at any second to feel the sting of an arrow flash through our backs. The feeling, I imagined, would be something medieval. We made it to the porch, then slid the door shut once we got inside. Terrell looked at me and smiled. “I’ve got his and hers bows in my garage if you want me to. They just need to be—”

“Get ‘em,” I said, and Terrell ran out the front door. I stood at the blinds and felt every single furious beat of my heart while Terrell was most likely digging through his garage, hunting for the remnants of what he probably once thought would be a good hobby he and Marvel could share.

I didn’t see or hear the next one at all. I must have blinked or looked away for a moment because I found myself staring at new arrow shot fresh into the ground. In the porchlight the shaft seemed to glow and the feathered fins reminded me of a pale tulip. I was excited. With all the math I had in high school I figured that within a dozen shots I could put one in the guy’s pocket.

Terrell walked in with the his and hers recurved bows and strung them up with bright white nylon bow-string by stepping on one end, bending the other down to the point where I thought it would snap, then tying off the end through a small hole. He held each bow by its end and waited for me to choose, all that energy drawn and ready to be released, like two snakes by the tails, like two waiting lives.

Get 2 more from
Dawkins in the new
BULL No. 1

Curtis Dawkins is BULL's chief book reviewer. He earned an M.F.A. from Western Michigan University and is currently an inmate at the Michigan Reformatory in Ionia, Michigan. His short story collection, Prison Ink, is the first release from BULL Books.