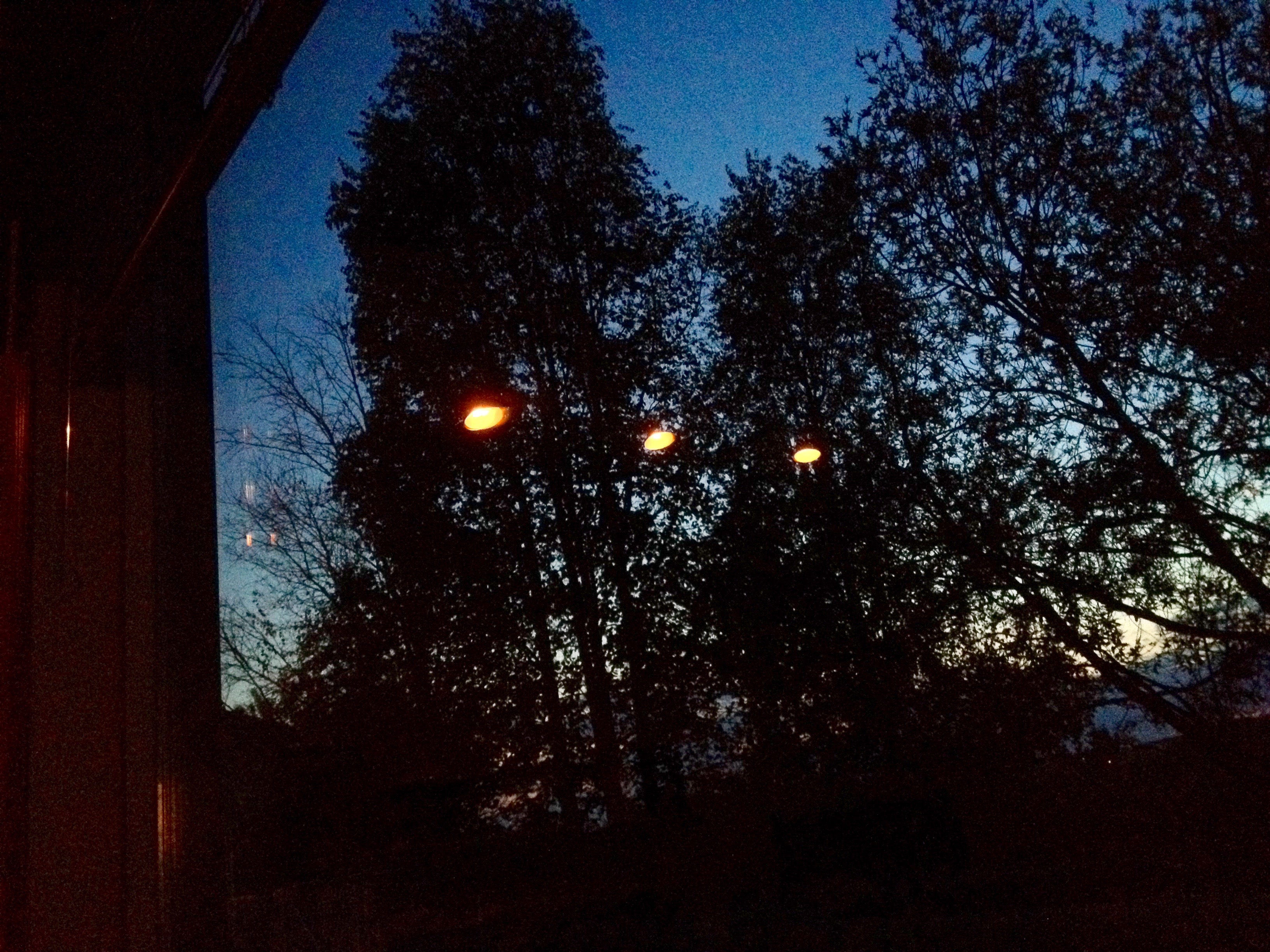 I read a lot of science fiction, and truth be told spent a lot of my waking time daydreaming about worlds impossibly far away.

My father didn’t share any of that with me. He kept a loaded Remington in the gun cabinet that he never locked. I had fired that gun a couple dozen times on the range. Three times in the woods. All misses, aimed at a doe, when my father and his friends decided to take their almost-teenaged sons hunting. My father snapped at me to stop shooting or I’d scare away the rest of the goddamned deer.

We lived on the edge of Shermantown, New York, in a one-story, two-bedroom home painted forest green in two different chipped shades. I remember it was spring, but the temperatures still didn’t reach past the mid-forties.

My mother was working the swing shift at Fat Lenny’s then, and one night my little sister Maggie and I had tried to make spaghetti. We called to ask what qualified as a rolling boil and again to ask how soft the noodles should get. Mom told us her boss didn’t appreciate her talking on the phone when she was supposed to be waiting tables and warned us never to call her at work again. If we needed anything, we should talk to Dad.

The trouble was, most nights Dad didn’t stick around. Occasionally, he’d sit in the living room and drink while he watched a baseball game on our seventeen-inch Sony television. More often, he drank his whiskey straight with the deadbeats and drifters at the tavern around the corner.

After we’d finished our microwave dinners, I insisted that Maggie and I hang out in the dark. The television looked better without the reflection of the standup lamp in the living room. The narrow glow of a flashlight made it easier to disappear into the worlds of pulp science fiction books—books I used to shoplift from the rack by the door at Mahanna’s. Darkness made it easier, too, to beat a hasty retreat when the headlights of our mother’s station wagon shone through the front window, or when we heard our father’s footsteps leading up to the doorway. We’d spring into our bedroom, duck under the covers, and act as though we’d turned in by our ten o’clock bedtime.

That night, I’d finished a new book about an alien invasion with an unhappy ending; I intended to tuck it under my bed and remove a better book to reread—War of the Worlds.

Dad never let us raise the thermostat past fifty-five degrees, but that night as I walked into the bedroom, it seemed colder than usual. I felt the breeze before I spotted the open window or the head poking through it. Curly black hair, a round swollen face. A puffy red winter coat.

His upper body was well inside the window frame, but it seemed he was stuck. He curled his tongue over his upper lip.

I wasn’t particularly bright or athletic or funny, but in those days my claim to fame was my ability to authentically imitate the bark, howl, and panting sounds of a large, angry dog.
The jocks frequently deployed me to terrorize smaller boys who couldn’t see us coming, their faces buried in their lockers. In lieu of any other obvious talent, I made dog sounds when we visited family at Christmas time, too. Maggie played violin.

I crouched in the shadows so the man at the window wouldn’t see me and I gave my harshest slobbering dog sounds. The man looked straight ahead into the room. His foot slipped from its tenuous perch on the sill. He scrambled backward. Heavy footsteps. Ragged breath. He was gone.

I waited there a minute on the floor, then ran to the window, slammed it down, turned the lock and drew shut the ratty brown curtains, all in trembling, clumsy motions.

Back in the living room, Maggie was oblivious. She wouldn’t have thought anything of the sound of me practicing my bark. My sister sat cross legged, her face six inches from the television on mute—I couldn’t read with the noise—while images of cop cars with flashing lights crossed the screen, bathing the room in the sickly blue light of a show I probably should have stopped an eight year old from watching. I considered telling her what had just happened, but scaring her wouldn’t do either of us any good. Our house was under siege, and it was only a matter of time before the would-be burglar or abductor or murderer or rapist might figure out what had happened and double back. Maybe with reinforcements.

I looked to the recliner. An empty bottle of Jim Beam was tipped on its side, a wasted drop drying into a brown stain on the beige polyester where the mouth of the bottle hung over the seat. Beside it, a thread-worn copy of A Farewell to Arms.

I decided to make the call. I found a tavern matchbook in the kitchen junk drawer, stretched the telephone cord from its hall-cradle into our bedroom, and pushed the door most of the way shut. That way, I reasoned, Maggie wouldn’t hear me, but I’d be able to hear if the man returned to the house through a different entry.

The phone rang fourteen times without an answer. I hung up and pressed the numbers on the keypad again. After four more rings, a voice scratched across the line: “Yeah?”

I swallowed. The spit hung in my throat for a second and I gagged. “Can I please speak to Jerry Kip?”

There was a long exhale. I didn’t hear anything for a second and thought he might have hung up. But then the cry came out: “Kip!” It was loud enough to hurt my ear.

I waited. No voices, but no dial tone either. No clatter of the fat man kicking down the front door or the sound of a saw cutting through the back screen. No smash of the living room window. The whole world was on mute.

My father answered the phone the way he did at home. “This is Kip.”

I waited. He’d be angry at the man in the window, but he’d have no one to target but me. He would ask what happened? and did the bastard take anything? and did the sonufabitch lay a finger on Maggie? All the things fathers in books said.

But he questions never came.

So I went on. “He already had the window open when I came in. He was trying to climb through, so I barked like a dog.” Pride swelled in me. “And he ran away.”

My father exhaled into the phone in a long unsteady stream. I could all but smell the whiskey through the line. “You calling to brag?”

A bright white light shone through the curtain and lit the bedroom for a second. It disappeared. Just a passing car. “No, Dad,” I said. “I was scared. I thought maybe you could come home.”

“Scared.” My father tried on the word. It was the first time I’d heard him use it. “What are you scared of?”

I heard the rattle of glass from beyond the bedroom and felt my pulse ripple. I put my hand back on that cold metal doorknob and heard the glass rattle again and a light thud. I recognized it as the sound of Maggie opening and closing the refrigerator—the pickle and mayonnaise jars and the glass bottle of Heinz all shaking from their compartment in the door.

“Speak up.” His voice had taken on an edge.

“I’m scared he’ll come back.” I felt a familiar stickiness in the back of my throat. I swallowed hard to force it back down and ran my sweater sleeve over my eyes to make sure they stayed dry.

“Remember when I took you hunting?” Dad asked. “Remember how to shoot?”

I didn’t say yes, but rather an mmm sound. The best I could manage without a sob.

“Then why are you calling me?”

My father hung up. I waited there in the dark with the receiver to my ear a few seconds longer, then put it down and waited thirty seconds in case he’d been cut off and meant to call back or changed his mind and would tell me he was on his way home.

By now, Maggie had resumed her post by the television, seated sideways, knees bent, feet kicked back so her heels almost touched her butt. She scooped chocolate and vanilla swirled pudding from a plastic container small enough to fit in the palm of her hand, and ran her lip over the top of the spoonful, eating the pudding layer by layer, a string of saliva connecting her lips to her dessert each time she withdrew.

She shifted without comment, so her legs were stretched straight out in front of her, white socks with blue and yellow and pink stars touching the TV stand, her big toe poking through a hole in the left one.

I scooped up the plaid quilt I’d been wearing earlier, still molded to fit my body, and draped it over my shoulder before I crossed behind Maggie to the gun cabinet in the corner—really just an old oak dresser, repurposed when Mom told Dad he needed to keep his firearms someplace out of sight or she’d always be nervous about them. The cabinet hinges squealed when they opened. I looked back. Maggie still had her eyes fixed on the screen.

The rifle waited inside and for the first time indoors, I lifted it in my hands. That’s eight pounds of life and death, my father had told me in the woods. Aim careful. Shoot clean. I ran a thumb over the safety, and elected to keep it in place. I figured if the fat man came back, I could release it first. One last warning.

In the meantime, I wrapped the rifle in the blanket to keep it hidden from Maggie. It was only after I sat back down on the couch that I remembered the book I’d gotten up for. On the television, a squat man in a khaki police uniform had his gun drawn. He saved the day in a silent world, impossibly far away.

Michael Chin was born and raised in Utica, New York and currently lives in Las Vegas with his wife and son. He is the author of three full-length short story collections: You Might Forget the Sky was Ever Blue from Duck Lake Books, Circus Folk from Hoot ‘n’ Waddle, and The Long Way Home from Cowboy Jamboree Press. Chin won the 2017-2018 Jean Leiby Chapbook Award from The Florida Review and Bayou Magazine’s 2014 James Knudsen Prize for Fiction. Find him online at miketchin.com and follow him on Twitter @miketchin.